I Guess I'm Just A Little Too Sensitive

Today, one of our Appeal Panel members mentioned that old, but evergreen adage 'may you live in interesting times'. He was naturally, entirely accurate.

It has been, of course, a strange week. A confusing mixture of encouraging work progress and frustrating personal events. Last week ended with union meetings and this one is ending with the fall out. Generally, I think my fate is decided. I will of course press on and after a rocky patch, I've been convinced that it can't just be me, despite colleagues assertions to the contrary. Having my mental health questioned in a semi-public environment was of course, frustrating and a bit strange. I think insanity prevailed, as ever.

Later in the week, I was relieved to meet up with a friend I've missed like crazy these past few weeks. I explained my odd time very clumsily of course, and probably ended up making myself seem rather ridiculous, but I suppose everyone needs someone to talk to, confide in, bounce off and generally think is pretty amazing. This won't get read, I'm safe saying these things. I just hope I haven't managed to cause trouble, which was never my intention.

Tomorrow I was supposed to be up before the Magistrate for Council Tax evasion and associated costs. It is now, I understand cancelled. No-one has yet explained to me how I can accrue court costs without a court case happening. Like I said, a bewildering week.

Looking ahead, booked tickets for The Delgados in Bristol in early October. Heard a new track at this site (which I highly recommend). Interestingly poppy new direction. Can't wait to see them again!

Another earlier start than perhaps I would have liked! Down to the station for the Torbay Express. Once again hauled by 60009 'Union of South Africa'. Hoping to get a better picture, but another very wet and overcast morning. Planned to take a quick shot and board the 0930 to Bristol. Typically, it didn't quite work out. Firstly the Torbay Express didn't arrive nearly as early as in previous weeks, however the Wessex units did. Normally this is a long string of stock moving from Exeter to Bristol, but today it was just a 150 and a 153, meaning that being in a good photographic spot would mean being a long way from the train. Since the train would get the road as soon as the Torbay Express cleared the junction, my plan wouldn't work! Boarded the train just as 60009 arrived, apparently in fine form! Large crowd waiting for the charter today, slightly less spectators no doubt due to the weather.

Had planned a quick wander up to Cheltenham - including a quick look at what was happening at Barton Hill, a wander around Temple Meads and finally getting me back to my parents place for a visit. Pleasant, quiet and uneventful trips. Not much of note happening.

After visiting, back on the train for a 'long way home' trip. Boarded a Penzance-bound unit as far as Taunton. Strange events on arrival. We arrived on the island platform 3 a little early - the only platform occupied. Next, there is some discussion between driver, guard and station staff. Then on a shunt signal, the unit left the station heading south. A couple of minutes later a Voyager passed on the platform 3 line at moderate speed. Another brief wait and the unit trundled back into view and called again at platform 3. The driver changed ends and it again left, for good this time! I should probably examine Quail Maps for any possible reason for this - very curious.

Home via a Voyager to Bristol and a rather packed 143620 back to Weston. Later, out to see the return steam service again - much too dark for pictures. 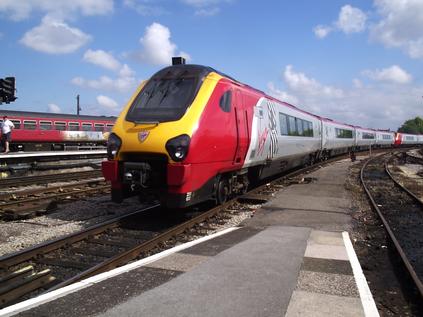 Despite feeling thoroughly dejected after a long and trying week, and I have to say a little physically under par too, managed to get up rather early. So, didn't have high hopes, but felt that I absolutely must get out and about.

Set out early, picked up a Rover and headed for Bristol on the 0809. Noted pet power car 43130 'Sulis Minerva' on the back. Time for a coffee, then aboard the 31's as far as Bath. Planned to get the 0945 Adelante back to Weston which was running a little late, so managed a quick walk into the city to get Peter Ackroyd's recently published new novel.

Back to Weston to pick up the first Holidaymaker special - 67003 on 1E99. I only needed one of the Class 67's out today, so not nearly as exciting as the past few weeks. Still, a pleasant and relaxing journey up to Bristol, and a chance to play with the camera a bit more in the hope of actually improving my photographs.

Playing with the camera... 220022 leaving Bristol Temple Meads
Onto 1V15 with 67001 - back from its not exactly glorious performance a few weeks back, as far as Exeter. Finally made telephone contact with friend currently in the midst of Florida's hurricanes on arriving at St Davids, and spent some time making calls to rearrange things here as a result of a delayed flight home. Much relieved. This passed some time waiting for 1V19, and 67015 - a new locomotive for me. Down to Paignton in strong sunshine along the sea wall. No time wasted on arriving, dodged holidaymakers, over the footbridge and onto the 1650 Paddington bound HST. Due to slow loading and unloading at several points, this service leaked minutes at a frightening rate! The driver made every effort to catch up however, and we fairly stormed some sections of the route, at what felt like very high speeds indeed.

Arrived at Westbury to find we'd missed the return working of the Weymouth 31's by a matter of minutes. Had wondered if we'd make it, but hoped the signal would be against them leaving Frome. Trudged dejectedly over to Platform 1 for a delayed 158 back to Bristol. Packed much of the way with people heading for nights out in Bristol and Bath.

Had aimed for the 2030 back to Weston, but spotted a 1955 Voyager on the screen. Waited, getting a few shots of the 31's shunting into the Platform 2 bays at Temple Meads. It soon became clear that the 1955 was in fact a phantom voyager! None of the staff could explain its presence in the system - very spooky! As we finally got underway, noted the twin 47's on the Eden Project Excursion train arriving on Platform 3 at Temple Meads.

Finally got back to Weston at 2102, very tired but a really good day which took my mind off work and the past week. Also much relieved that friends are all safe and well.
Movebook Link 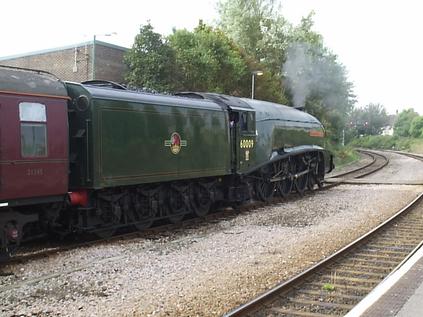 A rather cloudy and overcast morning. Not the best for photography, but nevertheless set off for the station to see 60009 on the Torbay Express. Stopped at the station doors by revenue protection staff, who seemed slightly amazed and rather offended that the majority of people passing through had just come to see the steam locomotive. Largest crowd I've seen at Weston for some time.

Wandered with the departing crowds over to the supermarket, where another large crowd awaited its opening time. Chatted to an acquaintance for a while, and generally hung back whilst the desperate looking multitude rammed trolleys and bumped baskets in an attempt to be first to the checkouts.

Tidied and read for awhile, and did some further work on Areopagitica. Still no release for all those who keep asking, and frankly there is unlikely ever to be one as the more shamefully convoluted the code becomes, the less inclined I am for the outside world to see it. Also noted an announcement of GNOMEfiles.org. Dutifully listed a couple of current projects, and watched the usage stats for mikegtn.net take an uncharacteristic leap!

Back to the station for the return Torbay Express, which was running somewhat early. Bumped into some of the usual suspects. A dull, wet evening with no light. Couldn't get the camera - which is still very new to me - to work at all how I'd hoped, so no pictures worthy of keeping. Fiddling with the Olympus on the way back, accidentally figured out how to adjust for light and took some stunning pictures of the car park.