All The Songs Sound The Same

Thinking back, my long love affair with The Wedding Present began before the internet, before I'd settled into a regular job and before I'd lost most of my hair. I must also confess that they date back to a time before I had really experienced the miserable and painful situations that sometimes feature in David Gedge's lyrics. Strangely, they went 'on hold' in 1997 just as my troubles in the romantic arena began, although a Cinerama gig did once feature as part of a fin-de-siecle reconcilliation!

Strange then to be setting off to see them tonight. Our Rail Replacement Bus to Bristol sped through a chilly but sunny evening, and my mind was on other things through much of the journey. I stopped for a quick pint before wandering to the Bierkeller - a venue I hadn't set foot in for maybe twelve years - my strongest memories of the place being Nirvana, messy and punky on their Nevermind tour - and some sixth form girls from my old school running away from the stage in horror at the noise when Hole began playing as support on a Mudhoney tour!

Not much had changed, the same sticky carpet, tiny bar, inconveniently pillared auditorium and low stage. Bumped into a dedicated Irish fan who had followed the band on the early Irish dates of the tour and was now dashing around the UK by National Express coach to catch more of the tour. Support act Persil correctly divined that the audience didn't care what they did - nothing personal, but when you're about to meet old friends, its difficult to concentrate on making new ones. On the dot of nine o'clock, the band ambled on individually to the strains of 'On Ramp'. A particularly uplifting cheer went up for Mr Gedge himself, and soon enough it could have been 1990 again as the thunderous ending of 'Interstate 5' gave way to the shimmering opening notes of 'Crawl'.

But of course, it isn't. There is a whole new record of emotional, edgy music to hear live for the first time. Perhaps the most consistent and strongest since 'Seamonsters' in my opinion. The new songs are mixed with a little of everything from the past - including a frantic 'Once More' and a much appreciated 'Kennedy' (not a favourite of mine). A technical hitch gives a chance for the good-natured banter between stage and audience. The odd Cinerama song is thrown in too as a reminder that David hasn't really been away - 'Health and Efficiency' in particular is quite stunning. 'Careless' provokes a comment from DLG that people may not be familar 'with that part' of his career. In fairness, its mainly people of my age, their gleaming pates bobbing in the spotlights. David notes that he barely needs to tell us the band don't do encores because he suspects we may have seen them before.

By 22:40 I'm wandering through the building site of a bus station wondering if I can get the last bus home and not have to wait for the 00:40 Rail Replacement Service. In the midst of turbulent times, in the freezing cold and slightly menacing surroundings of St. James Barton, I am very very glad I came.

For a very long dull period I have felt almost unable to read at all. This weekend whilst suffering a degree of mental disquiet, I have finally begun to devour literature once again. The text which restored my faith in the printed word was A Clergyman's Daughter - a strange, severe little novel which most Orwellians seem to recommend against reading in favour of one of his more influential titles, but which I've been meaning to pick up since the Literary London conference last summer.

What struck me most about the novel was how similar it was to a Gissing novel of the early period - a series of 'happenings' connected by long passages of psychological examination of faith and doubt, poverty and duty. Themes not dissimilar to those Born In Exile in a strange way.

Perhaps unsuprising then to find this passage in Chapter 4:

She ate her Christmas dinner - a hard-boiled egg, two cheese sandwiches, and a bottle of lemonade - in the woods near Burnham, against a great gnarled beech tree, over a copy of George Gissing's The Odd Women.

That Orwell admired Gissing is not in doubt, and has been explored thoroughly elsewhere. Perhaps what suprised me most is how in this reportedly inferior novel of the 1930s Orwell achieved the very flat, greyness of tone which he so admired in Gissing to remarkable effect. Along the way he manages to debunk the state-sponsored dominance of the crumbling (both in faith and in fabric) Church of England, in a manner that I can only imagine Gissing would have applauded.

A Clergyman's Daughter doesn't have the universal appeal of some of Orwell's other work, but it succeeds almost as a historical work. A snapshot of how we used to worship, and the cold, dull English fear of not having enough to eat.

I realised that it was at this stage in the release process for 'Warty Warthog' that I originally installed Ubuntu back in September. The idea then of running a Debian based distribution was alien and scary, and I wondered just what all the fuss was about. Around a month later, I was convinced. Having run the 'Hoary Hedgehog ' development release for some time on another machine, I decided to take the plunge and upgrade my main machine this morning.

All went incredibly smoothly, and I'm really happy with the outcome so far. No doubt the next few weeks will see the remaining rough edges knocked off, and the impending GNOME release introduced. Once again, I'm impressed just how robust and usable this distribution is, whilst remaining up-to-date with recent upstream package releases. 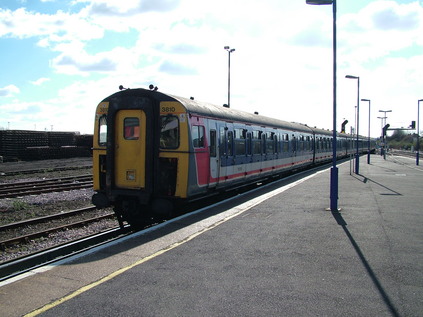 Started the day by discovering that First Great Western no longer offer a Day Return fare from Weston to Reading! Set off into the early morning sunshine, recovering from the shock of high ticket costs on a diverted HST. To Reading via Hawkeridge Junction and the Berks and Hants route. Lots of confused passengers wondering why it was taking so long, and where Swindon had gone!

Noted 165136, recently reliveried in connection with the London 2012 Olympic bid. 66603 was also sitting forlornly just west of the station. Brief wander around Reading station. Freezing in the shade, so rebooked and headed south to Basingstoke. Quick change for an Eastleigh bound train - all efforts to catch one of the remaining slam door units failed. Ended up on 444 - my first ride on one of these units. Much better than the 450, a reasonably comfortable and spacious feel, and a smooth ride. 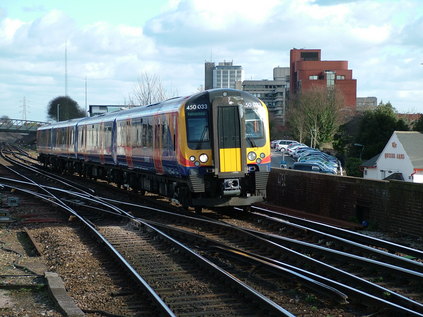 Eastleigh was very quiet compared to my last visit. Decided to try a bit of camera practice on passing units until something happened. Slowly I'm beginning to experiment and improve how I use the camera. Luckily 60032 was out and about, and obliged by passing through the station light engine, and eventually returning southwards on a ballast train, with a great deal of noise and clag! 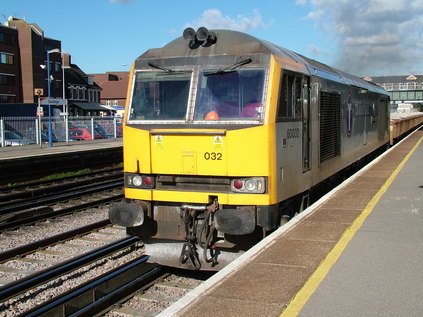 Decided to head back to Basingstoke. Frustratingly, everytime I took my eyes from the rails, something interesting seemed to pass us at speed. Spent a pleasant hour or so trying to stay in the sun and out of the cold. Spotted the blue liveried VEP 'Gordon Pettit' sandwiched between other slammers. Hopped on a late running Voyager back to Reading, where 180101 finally showed up - after months of being at the opposite end of the line to wherever I was! Back via the same route as this morning. Nice to get home whilst it was still light!
Movebook Link