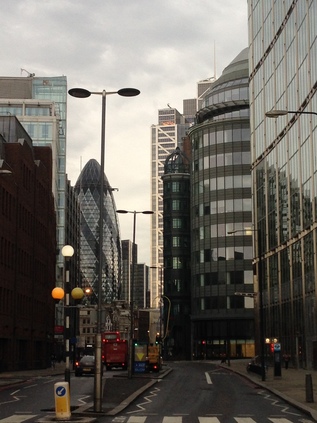 Drawing The Heat - Summer on the edge of the city...

I know all too well that sometimes I have a skewed view of London. Coming here early last year with a new perspective on the city reminded me of how bewildering it can be - how diverse, how hard to fix in the mind, how shifty the place can feel under your feet. This visit amplified that sense for us in some ways, while also allowing us to find some curiously pleasant corners too. This time we found ourselves in Hoxton, staying at a hotel we'd fancied visiting for a while and exploring both nearby and further afield. It was a hot day when we arrived, maddeningly so because there was just no air to be found in the city. We slogged across town slowly, giving up and walking the last stretch, and slumped into the cool, pleasant hotel surroundings. Outside the pavements baked and reflected heat back up at us. We were at least safe in this little bubble of neatly designed, air-conditioned wonder.

But to be here without getting my feet on the ground was equally maddening, so for the couple of days we were here, I took to heading out early in the morning and pounding the still cool pavements before the city woke. It was already hot when I left the hotel, with the morning sun hovering just over the warehouses and collapsing factories of the east. Shoreditch was its usual enigma - a place being gentrified by a class of people bent on resisting the appearance of gentrification. I recalled a first walk here maybe twenty years back - the buildings weren't much changed in many ways, but their contents were wildly different. It would be easy to lampoon the specialist tea shops, artisan bakeries and high-end designer furnishing emporia - but it would also be unfair. The district is evolving and alive, despite the sense of dissociation from its history. This is change - and it's happened here, more than anywhere, for more than a thousand busy years. As I walked, a trickle of hipsters began to emerge - some heading home after their Friday night, others leaving for work. At the junction of Great Eastern Street and Shoreditch High Street, cultures clashed. The 'real' East End of halal kebab shops and travel agencies swings in from Bethnal Green, the gentrified north holds fast refusing to change, and the City leers hungrily to the south. It was an oddly contested spot which echoed the strange days we were having.

Pressing on south, I decided to enter the city. At a weekend always a strange pleasure with the feel of an inhuman landscape which has been suddenly abandoned by its inhabitants. Glasses grew sticky on tables outside pubs and little refused to whirl in the windless morning. Bishopsgate was silent and dry, the sun just starting to glare back from the glass monsters which line the street. The cleaners had been out before me and the vague hint of disinfectant drying in the air was apparent. I could hear my own footsteps as I trudged south past the row of Police cars which are stationed in the median of the street near the Police Station, but always look haphazardly abandoned. The only life was the faint buzz of activity around Liverpool Street station, so I wandered in for coffee and the opportunity to watch people. It was a curious and unsettling morning, and I needed to see the world waking up. Stations always anchor me, always fix me on a national and local map I'm capable of holding in my head mostly. After a silly customer service argument, I lingered over my hard-won cup for a while.

My next opportunity for a stroll came later that afternoon. The sun was still high in its arc, and the air felt dead and flat. But I'd been encouraged to get out and enjoy the visit despite the airless heat, if I could. I knew I could. The ridiculous feats of Summer 2012 - my own Olympic achievements - were evidence of this. I set out into the fringe of Hoxton this time - a little knot of streets I'd shamefully enough been happy to weave into my critical narrative but never truly explored. Crossing into Old Street by way of the curiously attractive, narrow winding of Rivington Street, I noted a pop-up market in full swing. Noted for later, I arrived at the impressive crossroads with Shoreditch High Street. The old station towered alongside the Town Hall and the Court building. A little knot of fading municipality which still felt vital because of the buzz of traffic and the overspill of Hoxton bars into the corner. It felt like the not-so-distant Dalston Junction in many ways. But in an earlier - or perhaps later stage of transformation. Not so shabby, not so vaguely dangerous, but just as strangely interesting. I lingered a while before pressing east onto Hackney Road. I'd traversed this path so many times on buses, dating back to an early stay in the area in fact, but I'd never really walked the streets. What a day to choose! The air crackled with heat and frustration. I looked and felt hugely out-of-place here. I trudged on, cars passing and oozing out loud music. Interesting views opened up through side-streets leading to alleys and estates, but I pressed on - pausing only to grab a drink before crossing the street and plunging into the cool green of Haggerston Park. Skirting the City Farm, I crossed the busy park diagonally. The locals were enjoying the place. Individual sunbathers read novels and baked, while little knots of youngsters drank and laughed. Families wandered through, sticking to the pathways. It felt strangely comforting in this inhospitably hot weather to see people out basking. Emerging on Whiston Road I contemplated a bus, but decided to press on to Albion Drive. To pay homage to Iain Sinclair? Perhaps - but also because I didn't feel I'd walked enough yet. So I set out again, noting the changes in the area since I'd walked it seven years ago. High rise buildings were being edged out by plesant low-rise estates. The area was quieter, less edgy and less ominous. Or perhaps the heat had beaten even the spirit of Hackney? A turn into Albion Drive is a turn into another century. Pretty villas, tidy frontages and only the preponderance of wheelie bins to ruin the illusion of time-travel. I did a circuit of the street, out to the east and back to the west, noting how it broke down into segments of single- and multiple-occupation. A book could be written about these homes, their strange stories and their unlikely survival in modern London. Nodding to Sinclair, I paused in the little square and rested on a bench. The throb of the city was just audible and was calling me back.

My walk and bus back were uneventful - an improbable dive under the newly reinstated railway line on Haggerston Road, and I emerged onto the splutter and drone of Kingsland Road. I let a bus pass by picking the quieter second one, which coincidentally took me along Old Street to a stop not far from where I'd started. Sometimes London does this - connects things up in strangely convenient and logical ways. It's this sense of things being well-fitted and close together which makes Londoners think that other cities don't work or are less convenient. But so often London disconnects too. We seek the journeys which make our lives simpler, and sometimes find the challenging trips seem impossible. London this weekend had, at times felt impossible to us. But like this bus, appearing just at the right time, there are always strange opportunities here.