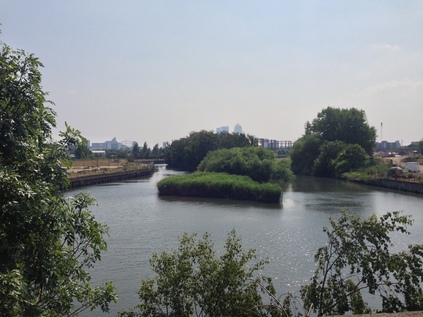 With only the loosest of plans we're heading east again. Having an Essex bolthole is proving hugely advantageous, but I'm out of practice at the advance booking game, and with Wimbledon reaching its inevitable conclusion this weekend, it was never going to be cheap. That said, we managed to use the unusually wonderful weather to our advantage - especially at our first destination which was Kew. After a minor altercation with a local who managed to get tangled in an ill-advised photo session some tourists were conducting, we headed for the village. It was calm and salubrious, a little market and a weirdly bad and expensive coffee shop, saved only by outdoor tables in a good location. Access to the gardens themselves was by expensive admission - even just to stalk the green spaces, so we picnicked on a village bench eating home made things happily and contemplating the weekend. The plan had been to hit the British Museum next, but we were sporting just too much luggage so we sought refuge from the heat in a Cafe Nero we'd visited once before. It was a welcome respite from the baking air outside.

The ascent from Bloomsbury by bus is slow and sure - less fragmented and hot than the crawl along Oxford Street but still at times it's a wonder we can nose through the crowds in Camden. The markets pour humanity onto the High Street. The heat reduces the pace to a crawl. It's almost a relief to begin the climb through docile suburban scenes to Hampstead. Once at the terminus though, the village is just as busy. Beer gardens overflow and people mill idly around enjoying the sunshine. We start the walk to Parliament Hill, encumbered by bags but undetered. The huge, stately villas of Hampstead impress not just with their order and beauty, but with their provenance - Orwell's name adorning the last in the row before the street gives way to a grassy rise. As we crest the hill, the slope falls away to reveal a knot of people basking in the sun, and beyond them a hazy, shimmering view over the city. I have completed another circle - returning here in entirely different circumstances. A whole new configuration. 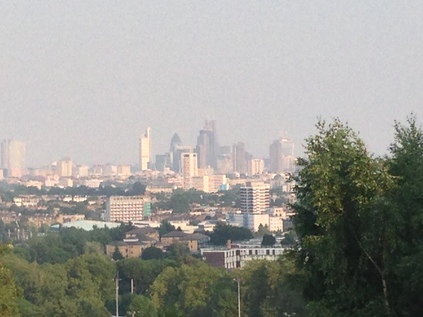 A hazy view from Parliament Hill

Its even hotter when we head out the next morning, and we're drawn towards Westfield again. The manufactured streets throb with reflected pre-noon heat, and the unseen speakers leak terrible music. In the middle distance the dust bowl of the Olympic Stadium reflects heat upwards in a shimmering mirage. Everywhere there is publicity for the relaunch of the park and its environs. Names for new locales selected with only the most tenuous links with history, but with marketing blurb which uses them like they've always existed...we're asked to believe Sweetwater was always know as that because it's '...where they made Clarnico Mint Creams'. London's newest suburb in E20 - or a strange rebirth of the oldest village outside the city walls at Old Ford? It's a strange parting in the subway at Stratford station. A place I've spent disproportionate amounts of time lurking in the past, and which has featured oddly often in our visits to London recently too. It feels odd to be cut loose - a little groundless, lost and purposeless. But the walk is full of possibility and expectation - it's the hottest day of the year again and I wonder how I always manage to be shuffling around these dusty, empty pathways at this time of year? No hope of a designer coffee stall this side of the Blackwall Tunnel Approach Road. I have a vague notion of where I want to be - but no real thought of how to get there. This is how the best journeys all begin...

In the end I plump for the DLR. I hop in and unexpectedly get the prime front seat. Pretending I'm driving for the short trip to West Ham is diverting - but I'm aware I'm annoying a bunch of young Spanish students who wanted to do the same. I wonder idly if they're the same bunch who taunted me on my Limehouse Cut walk a year back? Perhaps I'm being haunted? On the platform at West Ham it's quiet - but the heat whacks me in the face the moment I leave the shade of the canopy. I climb the stairs, and I'm momentarily unsettled by the echoing brick cavern of the station. It's oddly good to be out in the open after this, walking a dusty industrial route alongside the railway. A deleted bridge sparks my interest briefly before the Greenway steps, which I ascend - the wide gated approach built for Olympic sized crowds now purposeless. It's too hot to be out, so apart from a few hardy cyclists the Greenway is clear. The Orbit shimmers in the middle distance back at my starting point.

Abbey Creek, looking towards the Thames

The dense air clamps around Abbey Creek as clouds of insects rise and whirl. The ghost of the Channelsea Ricer reflected in the office block windows - which are now equally unrequired and empty. The reek from the modern pumping station envelops the old temple of municipalism, Abbey Mills Pumping Station - a weirdly oriental presence in the searing afternoon heat. Another small group of cyclists pause for water, but sniffing with distaste they soon move on. I cross the creek, and walk northwards towards the thin blade of a tower block on Stratford High Street, an oddly overt bit of Olympic planning gain. It could be a year ago - with all the tension and possibility that this walk would have contained then - but things feel very different. The temporary bridge taking the Greenway over the street isn't there anymore. The route is deleted in every respect. So, I turn west into the little knot of Bow streets which snuggle between the river and the sewer. A curious little estate of streets which seem quiet and inconsequential now, just as they were last summer at the height of the area's fame. Picking my way around the heat-blasted streets I find Three Mills Wall River and edge south. The park is full of sunbathers and frolickers - but its proving too hot to be energetic, so people loll listlessly on the grass. I'm an odd presence - still shirted, walking determinedly.

I linger briefly on Three Mills Island, because it always feels like a rather special spot. The tide is high, and the mill buildings look superbly solid and familiar. It's easy to get caught up with comparison and reassessment here, but I press on along the narrow spit of land which divides the watercourses. Even the ever present cyclists have decided to stay at home, and I have an unusually trouble-free trip to Bow Locks, with none of the incessant and impertinent bell-dinging high speed swishes of metalwork. The water shimmers ominiously here - a long-haired latin model is posing for a photoshoot against the lock machinery in his billowing pirate shirt, otherwise the scene is deserted. I traverse the looping bridge with its curious steps which make my ankles ache, and head up the slope beside the Limehouse Cut which leads to the Blackwall Tunnel Approach Road. Appearing just over the rows of gantry signs and low-rise, empty-windowed former industry is Balfron Tower which I'd visited a few weeks back. Slowly, surely, this corner of the city is beginning to make sense to me. 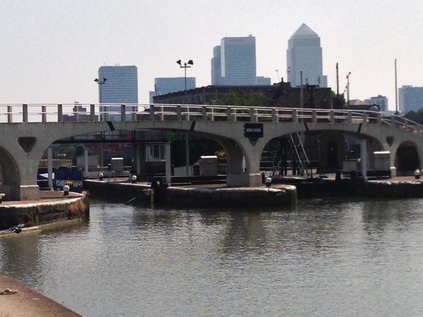 Deciding that a bus adventure needed a little more time, I slogged the final section of the walk through Bromley-by-Bow on tired, hot feet. The High Street was quiet, occasional whoops of joy penetrating the quiet from garden paddling pools. I cut through the back of a block and onto Bow Road to pick up a more direct bus back to the City and soon found myself on an overheating 25 which must have been the first for a while as it stopped almost everywhere. I'd meant to get an 8 and take a circuit of Bethnal Green, but this would do fine. It also meant a brief final walk from Aldgate to Liverpool Street, passing the entrance to Bevis Marks Synagogue which I'd mentioned very recently based on a memory of a visit. As I refreshed myself with reduced priced baked goods and fruit juice in the gardens of St.Botolph's Church, I reflected on a walk which I couldn't have made a year ago because of security checks, but which now was just as diverting and engaging as ever. Any thought that it was the grand Olympic project which drew me here dissipated - it certainly helped, but the pace of change is always in a strange parallax out East. I'll be back, because I need to see what happens next...