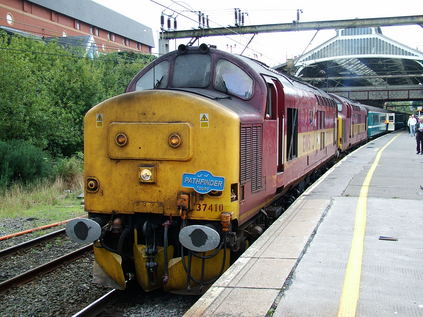 At last, found myself back on the rails and not a moment too soon. This tour, originally planned for June, was pretty simple - a pair of 37s would meander it's way to Lancaster, take the Cumbrian Coast line, and head back via the West Coast Main Line. Oddly, given the mess of cancellations and reschedulings this summer, the Lakeland Express II was taking place some months before the Lakeland Express I! It was almost inevitable given the state of the EWS fleet that we would have 37410 and 37417 today, but having heard about their performance on the Torbay Express a couple of weeks back, this wasn't a concern.

So, down into the depths of New Street after breakfast to watch the locos arrive double-heading a rake of ex-Anglia MkII air conditioned stock. Rather unexpected, but all was soon explained - the tight clearances between Maryport and Carlisle have led to tours being banned for a number of years, and having few opening windows was a condition for this trip running. Settled in for the ride out to Shrewsbury and through the Welsh Borders to Wrexham General. The pair of locos were performing perfectly, despite the timings being less than challenging. Extended stops at Shrewsbury and at Wrexham were followed by some more challenging times through Chester and onto the WCML at Acton Grange. We were booked a long stop at Preston to service the stock, and in weak sunlight we got our first real chance to see the 37s.

We passed Carnforth on the rather rare Up and Down Goods Line in improving weather, and started our long slog along the coast. The flat countryside gave way to increasingly mountainous terrain inland, and as we curved southwards towards Barrow the marshy fringe of Morecambe Bay dominated the seaward view. Another brief stop at Barrow, much as I recalled it from another visit coming the other way along this line just a couple of years back. Underway again, and northwards towards Sellafield. There had been much excitement earlier as we'd realised that the four huge cooling towers at Calder Hall were due to be demolished today. As it turned out, the towers fell at around 09:00 and as we passed the mysterious complex all was quiet and deserted, and the horizon looked strangely empty. A good few DRS locos on shed at Sellafield too, and as always, no people around. However a Police vehicle did seem to appear quite suddenly and prowl around the station area during our very brief stop!

Onwards along the coast, noting the strange beachfront shacks, some closed up for the winter and clearly holiday homes - but others inhabited and busy with activity. It must be strange to live hear, between the railway and the sea, and in the ominous shadow of the reprocessing plant. The last stretch of our outward trip was preceded by dire warnings about the tight clearances, and stewards were posted at every droplight by order of Network Rail. No-one lost any appendages, and we arrived in Carlisle only a few minutes late despite a slow trundle around the coast. 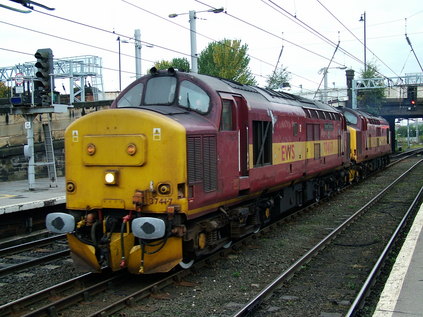 After watching our locos run around the stock, walked briefly into Carlisle. Despite many visits I've never really walked far from the station. On a Saturday afternoon, the town was busy with lots of young Emo types lounging around the square and outside the Courts. A European market was in full swing, and resisting the various delights on offer wasn't easy. Headed back to the station to find a tense situation between a couple of gangs of local kids. The Police shepherded them along, depositing the whole lot at the door of the station! The vague threat of teenage violence continued on the platforms, and a member of staff in the buffet remarked what a strange idea it was to take a gang off the street right outside the Police Station and to move them somewhere far more dangerous! After a bite to eat, back on board and ready for our long homeward journey.

Once underway, headed for the door and stuck my head out of the window. It was freezing and the light was failing, but the sound of the pair of locos thrashing up to Shap Summit was unforgettable. Stayed at the window for the curves and twists to Tebay - fantastic entertainment which reminded me why I love these days out so much. Back in the warm, surprised by a sudden flash of red light in the sky at Hest Bank. A huge sunset silenced everyone in the coach, and a few tried to capture it in a photograph. A magical moment to end a refreshing and enjoyable trip. Not long until the next one I hope...

What Did Your Last Server Die Of?

After a couple of weeks of messing around, the mikegtn.net server is finally up and running once again. After almost four years of trouble-free running, and with parts dating back much longer, I noted things were amiss a couple of weeks back. A quick swap of the power supply seemed to fix things, but eventually the little 16Gb Maxtor hard drive finally gave up the ghost.

I got things up and running fairly swiftly at first, but soon stumbled into trouble attempting to get Cyrus IMAP configured and playing nicely with Postfix and the various other bits of the mail system. It's been years since I played with these systems, and with my much tampered-with config files now gone and my skills very rusty, I floundered a bit at first!

Finally, today I managed to get the last bit of the puzzle going, and salvaged some final bits of data for this site. Everything should be back to normal, and given that I've had precious few hours to fiddle with the box I'm happy with the results. Finally, the machine really is a server, with no X or GNOME at all. Given it's age, the performance is pretty incredible.

Highbridge has had it's new roundabout for a week or so now. The contractors could be seen last week working well into the evenings to finish the road markings and segregated cycle facilities. Finally, only a little over a month late, the new road alignment opened to traffic. Almost immediately it caused problems. The long straggling queue of holiday traffic refused to acknowledge it, and ploughed endlessly forward. These people are habitual holidaymakers who perform this exodus to the southwest every year. They cannot countenance a change in the layout and drive ahead regardless. A few mount the kerb of the circle, or scrape the barriers in their attempt to retread the same ground as last summer.

The roundabout doesn't work - the volume of traffic on the north-south axis won't allow it to function as designed. Maybe in a few weeks time when the holidaymakers have gone home traffic will flow gracefully around the network again, but it's clear that for whole months of the year we will experience delays just like before. Once again a major developer is allowed to butcher the fragile infrastructure of Highbridge in the pursuit of profit, with no thought for how the town can continue to work.

Meanwhile, work on the superstore continues apace. The great white hulk is barely visible from the road, behind the houses and tucked in next to the waste transfer station. From the railway however, a low brick wall forms the boundary of the site and the extent of the building can be seen more clearly. For now at least, Springfield Road has disappeared. A strip of tarmac, now a contractors' car park, exits oddly onto the throat of the new roundabout. The area is a no-mans-land for pedestrians, and an appearance with a camera is now greeted with outright hostility.