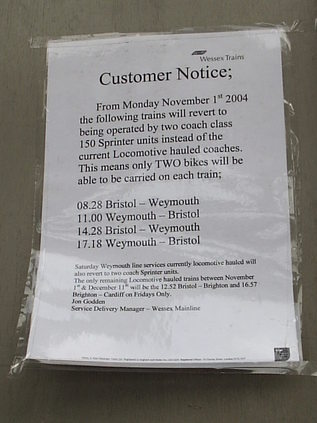 Not Quite The End of the Pier Show

Reportedly, today was the last day of Class 31 hauled services to Weymouth. Naturally, quite a lot of cranks planned to show up - and a general convergence on Temple Meads this morning made for something of an event atmosphere. Problem was, the Peds are back next week! Wessex reportedly have in excess of twenty units out of traffic - including the burned-out 143623 which is surely destined for scrap. Also, lets not forget 150234 which met a tractor near Newquay. I get the feeling there maybe several 'last ever' trains before this year is out - notwithstanding the plan to do away with locomotives on the FO Brighton run in December.

Still, I've not been to Weymouth for a while. I've not done it often over the summer, firstly due to the diversion of other things, and I confess I find parts of the run almost unbearably dull. I'm not sure why - I always have. The traction has often made up for this, and perhaps I will eventually get around to scanning shots of Class 37/4s on the 'Sand and Cycle Explorer' back in the mid-1990s. Today - overall, a good run - some of the best timekeeping on this route I've ever noted. Some interesting stuff at Westbury including half of the 59/2s, now here having moved home from Hither Green.

A short break at Weymouth. Time to wander a bit, and to spot the notice below pinned on the doors of the guard's van:

The indistinct bit at the bottom hints at December 10th being the last hauled Brighton service too. 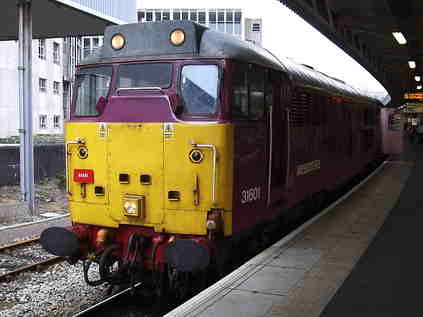 31601 at Bristol TM between Weymouth turns
Weather varied wildly during the return journey. Had a notion I'd get one of the Virgin shuttle services up to Gloucester and see if there was a chance of heading to Newport. Plenty of time to board the very late 221114 which was languishing without a driver. Nothing of note happening at Gloucester, and with the blockade between Cheltenham and Birmingham, few options. Back onto the Voyager for Bristol. Train Manager struggling hard to explain that as well as the coach journey that passengers had just endured due to planned engineering works, they may have to do another one if they were heading west of Exeter due to last week's events! Brief wander around a chilly and deserted (though mercifully dry) station before heading back to Weston.
Movebook Link 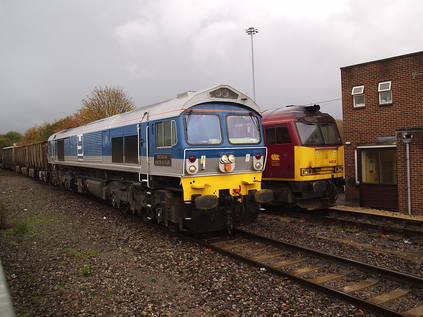 Took a day off work today, ostensibly to get some random refuse which has been lurking outside the flat collected. Neither the usual rubbish collection, nor the recycling people are collecting from the house at present due to the state that a recently departed tenant left things in. So, called on friends to provide a vehicle and finally saw off bags of general rubbish, some dodgy sixth form art projects, and several broken televisions. Once the recycling goes next week, things should be back to normal.

Celebrated by getting a Wessex Rover and heading out with little idea where I was headed. First to Bristol, and straight up to Parkway. Then on to Newport. Wandered around, checking Godfrey Road for interesting activity - nothing much going on. Weather still appalling, services to the South West remained chaotic.

Decided to head for Westbury. 158817 absolutely jammed most of the way, and particularly between Bristol Temple Meads and Bath Spa. Wessex dire unit shortage is biting hard on this route.

Decided to head back to Bristol. The Portsmouth to Cardiff/Penzance arrived very late, very full and after splitting, very confused about its destination due to the trouble on the sea wall and futher West. Flagged it for the Weymouth-Bristol unit which followed. On arrival at Temple Meads, headed for the pub for a belated, low-key birthday drink.
Movebook Link

Today I have a button on my radio I won't need to press any more.

Many years ago, I had a book. I used to write down the names of records, the obscure labels and just about every detail I could glean about the records John Peel played. Later, when I discovered Neil at Bubblegum, and then made direct contact with labels in the US I managed to finally track down most of them. I spent huge amounts of money on many obscure records, and I still own quite a collection of strange and wonderful music.

Occasionally, even now I will stumble across something from the book which I didn't managed to find back then. The record is eleven years to finally find an Ed's Redeeming Qualities cassette called 'More Bad Things'. Nowadays, in this remarkable internet age, I've even got a recording of the very night John Peel played the track, back in 1991. Times change. I probably wouldn't have a book nowadays, just a good connection and file sharing software...

And so farewell then John Peel, groundbreaking DJ, consummate family man and antidote to banal radio. The news arrived in the office late this afternoon. Didn't quite believe it at first - he is one of those people who has always been around, and seemed like he always would be. The few of us still around later talked a bit about his shows and the music he played. We're a diverse bunch, and perhaps the most remarkable thing was that everyone from 18-50 had a memory, an opinion, or some music which somehow was related to him. Some mentioned his unashamed pride and love for his family, which he expressed so strongly and frankly during his 'Home Truths' programmes, an unusual trait in these cynically detached days.

Thanks John, for opening my ears to lots of things I'd never have otherwise heard, and for one brief mention of a certain tape label a long time ago.

Yesterday evening I finally decided it was time to move my main machine to Ubuntu. I've hung on to an old Fedora Core 1 installation on this machine for far too long, wondering if my hardware would work with a 2.6 kernel. Things were beginning to get a bit flaky, and I knew I had to do something soon. I've not been convinced by recent developments in the Fedora camp, so the recent successful experiment with Ubuntu on the other machine was a relief.

The process wasn't entirely painless for me - but the install was, of course, completely simple and refreshingly straightforward. I struggled with getting my DSL modem working - all down to hotplug trying too hard, and then set about grabbing lots of updates. Finally, this morning I started restoring services - IMAP was much easier than before, the webserver confounded me for a while. Eventually, I'm almost back to where I started, but with a clean, quick and updated system. Best of all is the work put in on the Project Utopia stuff - just plug in the camera and I get the picture, things just work. Which is great.

Hard work, but worth it.