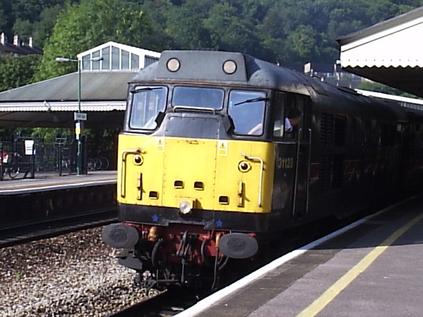 I remember when Skipping was a Playground Game

Another sort of vague and directionless, and also extremely hot, day - the problem is with Summer Saturdays and holiday specials, that there is a lot going on locally. I considered travelling further afield, but laziness and curiosity got the better of me once again, and out 'skipping' I went...

In an effort to get out earlier however, decided to try to get the Class 31s heading for Weymouth, for at least part of their journey, and as a result decided on a Wessex Rover. Out of Weston on the 0809 and onto the 0858 Weymouth as far as Bath, with 31128 leading and a respectable amount of racket as we went! Planned to stay on to Westbury but it became apparent that getting back for the next move would be impossible, so hopped off at Bath having just spotted a professional acquaintance on board too!

Back to Weston via nice cool First Great Western 180 in time for 67001 on 1E99. This was 67001's first outing for some time, having been out of service for around a year. Lucky to get it too, as it seems it later failed at Sandal & Agbrigg on the outskirts of Wakefield. Just a short hop to Bristol, but another 67 ticked off.

Lingered at Bristol to see the Virgin HST arrive, then off to Newport for a nose around and a spot of lunch. Not much doing at all - a single 66 on Godfrey Road in fact, so soon back heading for Bristol with a quick glance into Barton Hill where both a Class 73 and 5051 "Earl Bathurst" were present, the later for tomorrow's Kingswear trip. Watched the borrowed GNER HST pass by, before hopping onto 67014 on 1V19 heading back to Weston, and the inevitable photo call - producing one of my better efforts, which is reproduced below! 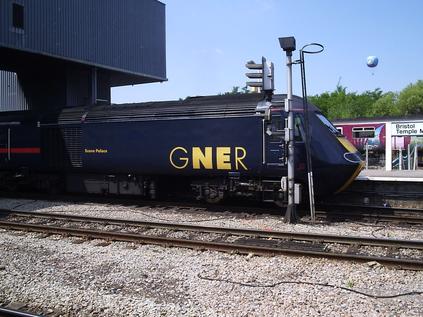 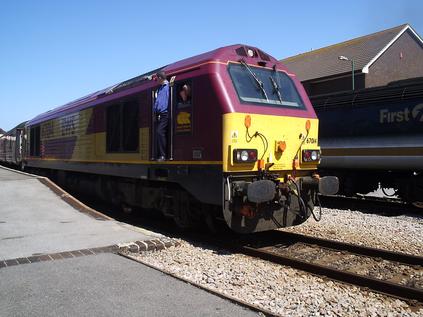 Used the rover to fund a quick visit to my parents in Highbridge, the return leg of which was delayed by a late running Virgin HST from Newquay which seemed to storm through at an incredible speed. Said goodbye to the guard at Weston, leaving him with a trainful of reasonably drunken passengers boarding for Bristol after a day in Weston. Normally, I get annoyed at guard's who do not check tickets during the journey. This one had my blessing!
Movebook Link

Today started weirdly, with strange but funny transatlantic messages, and an intercontinental conversation which made me chuckle, and started my day much better than I'd hoped. Its a long time since I traded on my English accent to get by. Made me want to visit the New World again, something I've not thought of doing for a very long time indeed. Its also very good to hear that friends are doing OK, and how fantastic it must be to re-establish contact after years. Wish I could find a way to keep the messages too...

Work was strange. More data cleansing in preparation for next year. Confident we'll have a really solid base for the work to begin soon. Can only hope that other coordinating LEAs have spent the time and effort to get things as close to correct as we have. A new employee started too, who lives in my old home town. Reminisced about our old school and teachers, many of whom are still around it seems. Burnham it seems, remains much the same as when I left - a little more run down, a little more depressing. Its almost comforting. I passed through on the bus last week and noted some changes, but reassuringly I think all the reasons I left remain much the same.

Browsed bookshop at lunchtime, since it was pay day - couldn't find a thing. Have a dwindling backlog of reading matter. Perhaps I will address that this weekend...

By helping with the arcane syntax of the tar command, I won the honour of testing the BlueVelvet theme for GNOME. However, myself and fellow #lemmings soon noted that gnome-theme-manager did not do anything with the BlueVelvet.tgz file. Some poking around showed it moving it correctly to ~/.themes but not unpacking it, and silently failing to report this to the user.

Soon found myself poking around in the gnome-control-center and ended up supplying a patch which firstly deals with .tgz files correctly, and secondly gives the user a clue when things have gone wrong. Another rather paltry contribution, but slightly amazed to find myself motivated to do such a thing after months of feeling utterly incapable of helping in any way!

Plunged headlong into a new week, and another meeting. This one however, had real and tangible results. We can now start getting on with work and turning piles of paper into preferences for 2005 school places. Its always a mixed feeling, a new cycle starting whilst the flapping threads of the last one refuse to fly away. To complicate things, had a brief meeting today which, despite being entirely expected, put the 'cat among the pigeons' to some extent. Cast in to competition - a situation I'm not comfortable with. A decade of government service puts me at a disadvantage where being competitive is concerned. Time to evaluate options, decide if I should fill in application forms, and generally start another (different) whole cycle over again!

Seem to be at a bit of hiatus in real life just now. A few minor things on the horizon, but mainly just coasting. Finding solace in reading as ever. Feeling an urge to study some more, but realistically this would depend on the future job situation - overcommitting myself would be a bad idea.

Interesting to note that the new American Music Club record will be released in the UK exactly 9 years and 363 days since I last saw them at Bristol University. Still, it will be a good birthday present!