The Eternal City Of York

Frustratingly, given that this is the first update for a long time where I've managed to get out and about, there are no pictures - due to some technical problems and very little spare time to sort things out. It's been an unusual couple of weeks - with family members descending due to a confusing house move, and lots of work related tribulations. I'd been looking forward to this trip for quite a while - a local start, decent mileage and a pair of Class 47s being the attractions. No particularly difficult track to score this time, but a few hours in York is always welcome. This would be my first trip with Hertfordshire Railtours, and the first operated by newcomers Victa Westlink Rail.

Set off with a lift from my sister to Taunton station. The tour commenced at Minehead and made slow progress over the West Somerset Railway, until Norton Fitzwarren where it joined the network and arrived on time. Spent the wait chatting with a few locals about the day ahead, and confirming the arrangement - double-headed with 47847 up front and 47815 tucked inside the train. The plan was to turn the train during the ECS move after York, with the same arrangement heading back. Once onboard, noted the SRPS stock which had been borrowed by the WSR was in very good shape compared to some of the Riviera rakes - but strangely not particularly comfortable. It was also incredibly hot, with the train heat blasting out unnecessary amounts of hot air. It was already shaping up to be a bright warm morning, and the people in the compartment stock further along the train looked pink and overheated already!

We made steady progress northwards, with stops at Weston-super-Mare, Bristol Temple Meads and Parkway, with the first real excitement occurring on the Lickey Bank. With only one loco running at this point and a load of nine Mk1s and a dead 47, there were moments when it all felt slightly impossible, and a great deal of noise and clag appeared to be coming from 47847. Moving at a relative crawl we reached the summit at Blackwell and began to accelerate once again. Took the Camp Hill line at Kings Norton, then avoid New Street entirely via Landor Street Jcn. Noted some impressive speeds between Water Orton and Derby - reminding me of some spirited Cross Country runs down here in similar circumstances a decade or so ago. After Chesterfield, took the Old Road via Barrow Hill to avoid Sheffield, and again made fine progress, having to wait time at the depressingly derelict Rotherham Masborough station. Once onto the East Coast at Doncaster, set out quickly before being briefly looped at Arksey. Rolled into a sweltering and bright York bang on time.

Another couple of tours had targetted the city today - including a luxury dining tour from Tonbridge and a steam hauled trip from Tyseley. Rood Ashton Hall was steaming gently in the station on our arrival at the adjacent platform. After the obligatory photo stop, set out for the city centre and a pint at The Maltings. Very busy - standing room only in fact, but cool and pleasant nonetheless. Wandered a little further into the city before re-crossing Lendal Bridge and walking along the City Wall back towards the station. Decided to retrace the route it used to be necessary to take to the National Railway Museum, along Leeman Road and under the railway. Not much had changed at the museum since my last visit, but a quick check in the yard saw Rood Ashton Hall being serviced for it's return trip. Made my way back to the station with the intention of getting a bite to eat and whiling away an hour or so on the platform.

After watching the departure of the 47 hauled Tonbridge trip and then the steam, wandered over to our platform for the return of our stock. Rumour has it that this went as far as Tyne Yard to be serviced - but that's not confirmed. Some early misinformation that this would happen with passengers allowed to remain on board was immediately denounced as 'utter rubbish' - appropriately by the man collecting the litter! Set out on time, and even after 17:00 the sunshine was still strong enough to make the carriage almost uncomfortably hot! Retraced our outward route, missing out Worcester, to Weston-super-Mare where I bailed to face the wait for the final stopper of the evening.

The Intercity Merrymaker format is interesting and good value, but I can't help but feel that some extra touches might have made the day run a little more smoothly - not least better buffet and trolley provision, although the SRPS folks did a fair job in the restricted space available. I can't honestly complain - 500 miles plus of large-logo 47 mileage for a reasonable price can't be bad. 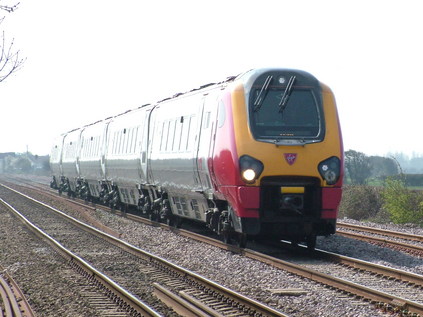 The haphazard approach to getting out and about continues, and with nothing planned for the long weekend, decided to take advantage of the various interesting photographic opportunities available locally. Things started badly - I misjudged the timings of a couple of the early southbound workings and completely missed 47840 hauling ECS to Laira and the Penzance-bound diesel hauled leg of The Great Briton. Both were coming back in some form later, but I kicked myself for letting an opportunity slip on an already fairly dull weekend. Heard that 47840 was returning early from Laira, so timed a mid-morning shopping trip to coincide with it's passing Highbridge in fantastic weather.

221104 passes Highbridge, ahead of the ECS working 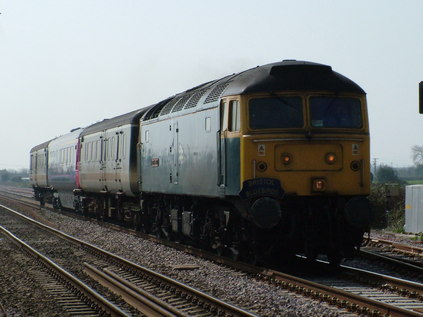 The plan for the day was to potter around home, doing bits of computer and website maintenance, then to head out for the return working of the two diesel engines which had hauled The Great Briton to Penzance, followed by the steam hauled return leg of today's part of the tour. Met some of the Bridgwater contingent heading for the station and passed on the news that the light engines were very early. Down to the station early to find a prime spot for the evening's entertainment. 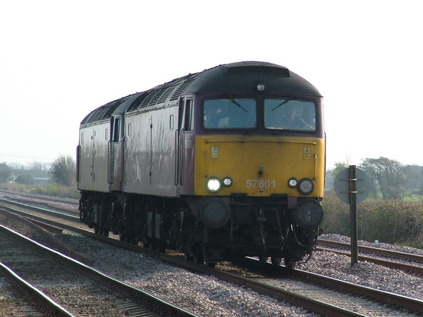 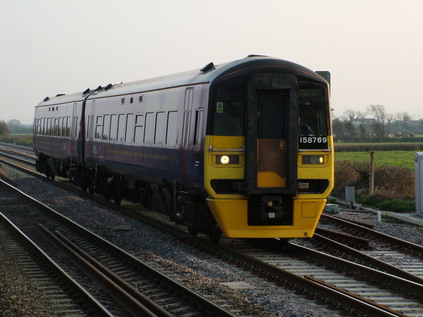 Ex-Transpennine 158769 on a local stopping service

A fair crowd had gathered at the station for the double-headed steam locomotives, and we though a few 'serious' steam types might elbow us out of the way. Managed to hold our spot, with a fair bit of hazy light left as the headlamp of 6024 appeared in the distance. The last couple of shots I'd taken had been a little dull, so decided to tweak the camera settings at the last moment - this stupid mistake, along with a case of fat finger syndrome saw me hit the button late and get a dreadful shot. Another opportunity missed. Cursed myself and headed for the pub! Strange day, but good to spend a sociable afternoon on the end of the platform.