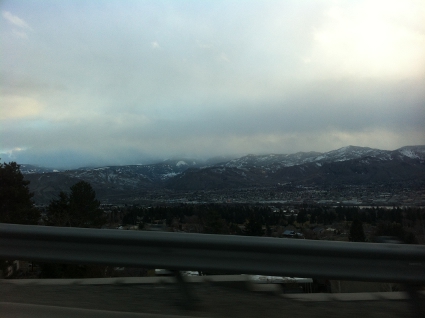 I've written elsewhere about how I ended up on my voyage of discovery across the UK... An early US trip based around music took me to places which were, it's fair to say, off the beaten track for most transatlantic tourists. But, as a result of making that epic - and in retrospect, pretty brave - jaunt across the sea I realised that I knew little of my home country despite poring over maps since childhood. So, twenty years later I found myself with a strange, unexpected connection to the Pacific North West - an area which had always intrigued me, and which was now important in so many ways to my future. Having visited twice before, this trip was a mixture of the comfortable assurance of knowing my way around Seattle to some extent, and discovering new things entirely. One of these discoveries was to be a jaunt into the eastern reaches of Washington - beyond the Cascade Mountains, into the dry and sometimes bleak hinterland which stretches endlessly inland. The area dominated by the mighty Columbia River - until now little more than a romantic notion in folk songs and dustbowl ballads. As ever, it started with a train ride...

Departing King Street Station heading north was a new experience, and once out of the tunnel the tracks swung onto the waterfront alongside Alaskan Way. The grey afternoon reflected in Puget Sound, giving the scene a quiet, wintry beauty which oddly reminded me of Scotland. It was strange - and more than a little emotional - to look on this scene which had signified so much which was new and different about these past few months, and to consider how things would soon be changing again. The tracks hugged the coast through Ballard and Mukilteo before swinging inland at Everett and starting the long slow climb into the Cascades. The scenery shifted - a rural patchwork of farmland not dissimilar to home in Snohomish County which became sparser, tougher country as we climbed through Monroe and Sultan towards the Cascades Tunnel. Suddenly, in the darkness outside the dining car there was snow beside the line. Deep, thick, virgin snowfall which was unlike anything I'd seen before. I was entranced. As we curved and twisted through the mountains, navigating Stevens Pass at ear-popping altitude, we chatted to a family heading home from a week in Seattle. We told them our plans, and once again we found a genuine happiness in strangers' responses which warmed the heart despite the cold outdoors. Our destination was Wenatchee, and we alighted at Columbia River station late in the evening. As the car drifted along the city's streets I recalled my first evening in the USA, looking out at the passing strip-malls and eateries of Granite City, Illinois - this was oddly similar, save for the looming mountains on the horizon. I felt comfortably familiar with this middle-American scene. 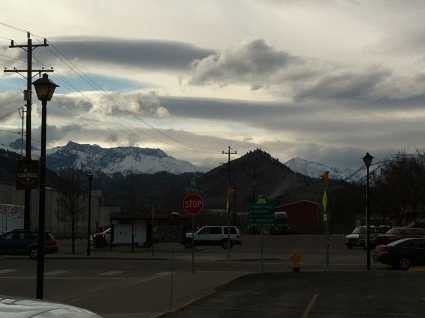 Waking to sunshine and mountains was a surprise after the usual slate skies in Seattle, and as I began to make sense of the surroundings I also began to rather like this little outpost of a city. Yes, it carries all kinds of emotional burdens for people close to me - and it shares my own former home town's ability to wind me back in time to a bored, ill-fitting teenager at a moment's notice. It's also an oddly conservative colony - a distinct contrast to things west of the Cascades - but in its little eateries and dusty corners, there is something here. History, events that were inconsequential at the time, but lead up to now - and my own entanglement in the story.

A day or two into the trip and we head out in the car to Yakima. It's a three hour drive across the plains of central Washington, largely following the valley of the mighty Columbia River and it's dams. The mountains loom on both sides of our route, but here between them it is flat, dry and empty. The river snakes in and out of view, running slow between its reservoirs now. Appropriately, the scene opens out at Vantage - the river a long, broad lake between steely ranges of rock. The highway swings west, across a low bridge which leads towards another climb. The sky feels closer here somehow. I'm moved to silence, taking in the broad-angle view. I've never seen anything quite like this before - never appreciated scale in quite this way. The midwest is a bit of a distant memory now, but it lacks the reference points which the mountains offer, and which dwarf the tiny strip of highway rising into the western sky.

At Columbia River station absurdly early and just a few mornings later, we're boarding the train back to Seattle. It's not been an easy visit for many reasons, but it has placed more markers in my mental map of the state, and in the timeline which stretches back. I think of my historical links to the area - the endless letters launched overseas to obtain music, the curious kinship of the low-tech labels. It's truly strange how the strands of the story should re-entangle here in this little gap in the mountains...