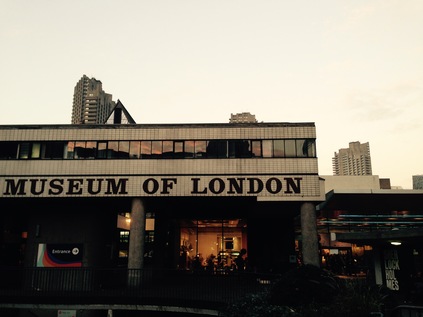 The Unnatural and The Commonplace - A City Weekend...

Aside from a brief walk across the eastern fringe, it's been a while since I wandered in the City. Thinking back, once I'd overcome my earliest misconceptions about London, my first great interest was this odd city-within-a-city, with its unusual traditions, archaic governance and strong sense of tradition. It always seemed particularly odd that this layer of the exposed medieval City existed as a backdrop to the intrigue and misdeeds of ultramodern high finance. The strange stories of Livery Companies, giants and royal subservience found homes in those few buildings which survived the great fire, and the evidence which that - and successive more planned conflagrations - has revealed. So, we'd hastily planned our first trip here in some time to be based around the 'square mile'. Yesterday we'd arrived and made a slow bus journey east through the Black Friday crowds. The unwelcome tradition imported from the US was filling Oxford Street with teeming crowds. Finally we alighted at Blackfriars and navigated a clutch of tight little streets skirting the still-noticeable dip of the Fleet Valley to find our hotel for the night. It was good to be back within the city walls.

Our excursion last evening had taken us along the embankment, west towards Parliament. Rising from the underground at Westminster, we skirted the House at dusk. Lights were beginning to twinkle across the river, the bulging oddity of St.George's Wharf now evident on the skyline. We moved along Millbank, passing the weirdly tired looking Millbank Tower which still symbolises the Blair-era machinery of Spin, with its Rapid Rebuttal Unit. Suddenly, the vista opened out and the startling white hulk of Tate Britain appeared. Nestled between the modern extensions and neighbouring buildings, the gleaming building both figuratively and financially appeared to be made of sugar. Still impressive if looking strangely overdone in this setting, the building continues to play a vital part in the artistic life of the capital. Ascending the steps we found the cafe and waited our turn at the Turner exhibition. Deep inside the building, the halls stretched out into blank eternity, the ethereal canvases swimming into view. It was mildly dizzying at times, the blasts of light and tumbles of salt water leaping from the paintings. In a corner was "Rain Steam and Speed" - our first encounter in the flesh, so to speak. As oddly moving as ever it looked on a page, the turbulence of speed, the rush of landscape and memory, and the indistinct and temporary nature of the train crossing a viaduct all seemed less real and more otherworldy in person. It's hard to imagine how this would have struck an early Victorian, experiencing high speed travel for the first time. We left utterly impressed, and on the way out spotted what appeared to be comedic genius Chris Morris collecting his bags as the gallery closed for the evening. We were late leavers too, hailing a cab back to busy Blackfriars along the stop-start tumble of vehicles heading east along the Thames.

The Museum of London, with the Barbican in the background

Today was planned at least to be a little less hectic. Setting out moderately early we headed to Bishopsgate by bus, breakfasting in a favourite spot from a while back, but alas finding no black pudding on offer. A leisurely start - followed by a much-earned walk through the City streets. Once we left the gravity of Liverpool Street, it fell immediately quiet. Workmen's hammers could be individually heard in the side-streets, the City as ever a continual churn of renewal and remaking. Streets closed for Crossrail were making our progress crazy and complicated. We zigzagged through Courts and Alleys, delighting in the fact they'd been there for centuries, before entering the Guildhall courtyard. The pale stone building gleamed across the amphitheatre, its modern extensions seeming to fall away from the main event. There was no getting inside today - but a moment in this quiet yard was enough, sandwiched between Guildhall and austere St.Lawrence Jewry with his sinister grid-iron weathercock. This was the centre of the city - and had been for many hundreds of years. It was hard to move on from this spot, but eventually we broke off west along the line of the ancient City Wall. At Wood Street, that edifice surfaces - beneath the victorian bricks, Roman stones mark the outline of a tower and the run of the wall along Aldersgate. We followed, ascending concrete stairs into the Barbican complex and the Museum of London. An overpriced coffee from the new concession, then down to the Sherlock Holmes exhibition. Entering through a bookcase, we were plunged into a gloomy corridor. Flickering excerpts from the Consulting Detective's manifold screen outings played on the walls, drawing us in. The exhibition managed to provide something for every kind of Holmes aficionado... For the literary purists there were manuscript pages and artefacts from Conan Doyle's life - his remarkably tidy handwritten notes set alongside the printed versions, indicating that he barely needed to alter a word! For fans of the filmed appearances there were endless clips and props, not least the overcoat worn by Benedict Cumberbatch in the detective's current masterful outing. Finally, for the topographer there was a wealth of material. Several adventures had been mapped across London, with time-lapse filmed runs through Holmes and Watson's routes through the modern-day city. There were also endless paintings and early photographs of the City as it would have appeared to Conan Doyle while he was writing about Holmes. Of particular note were the remarkable prints by Alvin Langdon Coburn - mysterious, only slightly focused cityscapes with brooding mists. His subjects were often not those which merited most attention either - canal scenes, wet pavements in Leicester Square, unusual views along Fleet Street. I was captivated. 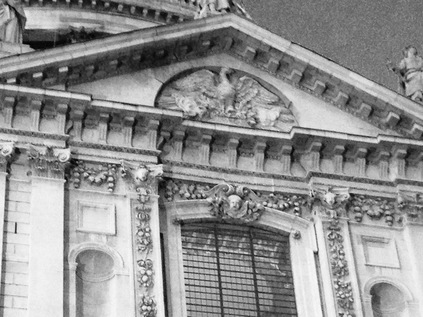 We spent far longer than I'd imagined in the exhibit, and after a brief refreshment stop, decided to look around the Modern London galleries. It was very special to revisit this old haunt in company, and good to see the Lord Mayor's Coach again, shining in the last sun of the day leaking lazily into the museum. We headed out on foot, enjoying the Barbican skyline in the wintery glow before heading south towards St. Paul's Cathedral. It's a great omission, and a source of some embarrassment that I've never set foot in this place despite many hundreds of passings by. Today wasn't to be the exception, as a service had curtailed sightseeing for the day - but we resolved to return. We edged around to the southern face of the building to regard the phoenix carved above the doors with it's 'RESVRGAM' motto. It was time to head back west, on a bus headed through the main shopping areas which was unexpectedly and thankfully diverted around the bulk of the traffic, delivering us early enough to relax and reflect on our trip over a drink at another favourite spot. This had been a hastily planned, purposeful visit which had at last returned me to the very city streets where my true obsession with London had begun. I think it may have won the City a new devotee too.