After a bewildering day, and with a painful eye infection I set off straight from work on a packed and sweaty train to Bath. The reason - a chance to see the Peter Hall Company performance of 'Waiting for Godot' at the Theatre Royal. Four friends in tow too - with varying expectations and ideas of what they were about to see, which was even more fun - what would they think?

I've wanted to see a performance of Godot for some time, having only previously seen a filmed version. This 50th Anniversary performance seemed an ideal time . I wasn't disappointed. It always seems that the play is treated with reverence and I've heard tales of some terribly serious productions, but the cast managed to find the space to enjoy themselves. They picked up the playful thread which Beckett wound through the work, running with it and engaging the audience. This exhuberance made the truly harrowing parts - particularly in Act II - by contract far more powerful. Jack Lawrence as 'The Boy' reminded me what a strange and sinister presence this character is in the play.

I'm no authority on theatre, but this was an enjoyable production of a favourite play. The audience generally seemed to agree. Polling my cohorts afterwards, most of them enjoyed it too. One or two of us talked at some length about the play trying to decide if it was 'depressing'.

A few pints of Pitchfork at the Old Green Tree convinced me it wasn't. 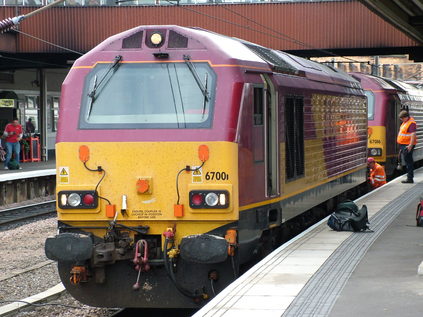 Woke up feeling groggy after a fairly late night celebrating my last day of work - as ever, only two of us managed to make the distance and now I was suffering a little. Hasty preparations, then down to the station around 06:00 with a fairly big crowd of fellow travellers already waiting. Exactly on time, 67001 and 67016 led the train into Weston. Found seats in a part of Coach G apparently reseved for Westonians, and settled in for the ride to York.

Speedy running throughout, keeping mostly to time with a few early arrivals at pick-up stops. The pair of 67s made short work of the Lickey, and we soon traversed the first bit of new track for the day - the short section between St Andrews Junction and Landor Street Junction which we took in order to avoid Birmingham New Street. Onwards to Derby, where a small line-up of Fragonset locos greeted us. Somewhat bumpy ride from here, with some quite aggressive braking. Turned right for the 'Old Road' at Tapton Junction passing Barrow Hill Roundhouse and a welcome handful of 56s at Ferrybridge.

Soon after arrival, noted the Network Rail New Measurement Train arriving. Having messed up a shot of the front power car, waited at the platform end to get a shot of the whole train. Surprised to find that there was no rear power car on the set! Completely failed to get a picture, such was my confusion!

Headed immediately for the National Railway Museum which I hadn't visited in nearly ten years. Only a short visit as others in our party had been there more recently, but good to see some new exhibits. Short trip into the yard behind shunter 08911 just for fun, then a quick look around new parts of the complex. In the works, noted 4472 Flying Scotsman and the (in my opinion ) far more impressive Duchess of Hamilton. Also noted a complete Class 71 loco surrounded by all kinds of junk in the sort of open archive/store room facility! Good to look in at the NRM again, and I think it may be worthy of another visit soon.

Into the city next, and for me a bit of a trip down memory lane. After a quick bite to eat, explored The Shambles and the bizarrely named but unimpressively tiny Whip-ma-Whop-ma-Gate. Lots of surprising memories of my last visit, which must have been around 1998 by my calculations. Return to the station via the Minster and a welcome pint of Black Sheep at The Maltings - a favourite watering hole when I've been here. 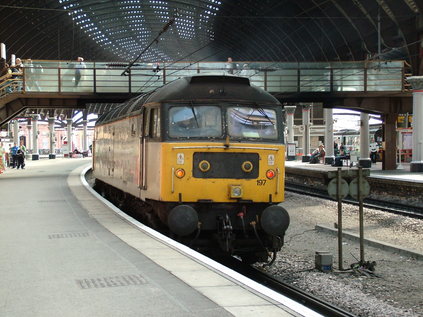 Back at the station, we were taken by surprise when 47197 crept almost silently under the famous roof returning from its earlier outing on 7Z51 hauling scrap wagons from Basford Hall to Tees Yard. Spent the last hour or so in fantastic sunshine watching HSTs and lots of Transpennine 158s coming and going. Also noted 60001 coming off the avoiding line - realising it was the first of the diminshing class 60 fleet I've seen in some time, though it seems some of them are now coming back into traffic. 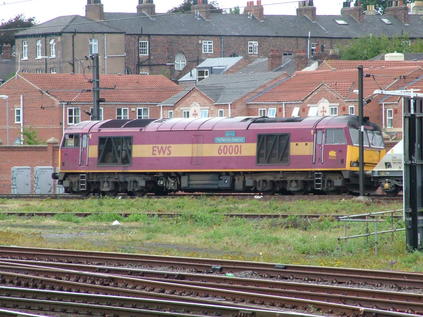 Away on time from York at 17:22, heading for Doncaster, then once again via the remains of Rotherham Masborough and Barrow Hill to Chesterfield. Feeling extremely sleepy in the evening sunshine. Despite running top and tail with 67001 on the front, braking continued to be quite a lively experience. Held at Tapton Junction for some time, which left us about ten minutes down but we made up most of this north of Birmingham. Amazing sunset over the Malvern Hills and a bottle of Spitfire to round off the trip. Arrived on time at Weston, and headed straight for my bed.

Well, for all the turbulence and trouble of the last couple of weeks, my final day at the office arrived and passed quietly enough. Mad dash to write up, pass on and hand over as much as possible of the informal stuff I do. Luckily, I'd spent some time documenting the formal procedures earlier on in the year - much to the disgust of then colleagues who didn't feel that it was 'work'!

My colleagues sent me off into the world with a book token and a survival kit including coffee and biscuits, so clearly my priorities have been recognised! A lunchtime pub visit was rescheduled for after work due to some protests, and a few stalwarts turned up - one or two leaving soon after due to other committments. As ever, it was down to the same old two of us to see the evening through to closing time.

Considering how I've left other jobs in the past this was quite low key - no speeches but then again, no recriminations!

I have as much to say as others...

Spent some time chatting to a friend I haven't spoken to for some time tonight. Strangely, during my period of near obession with B S Johnson she had selected a couple of quotes found in a Guardian review of Like a Fiery Elephant for a homemade bookmark. I know I'm probably a predictable bandwagon-jumper in some respects but I found it odd, especially as we usually have such different tastes.

Got chatting about bookish matters, and particularly the possibilities of both of us having small things published soon. Thought how strange it would be to see each other's work in print rather than on a computer screen prefixed by the message "What do you think of this then?".

A big stack of books has once again developed following the Literary London conference - including Ford Madox Ford, Patrick Hamilton, Woolf and Sterne. Where the time will come from between reading items on Management Theory, I have no idea.