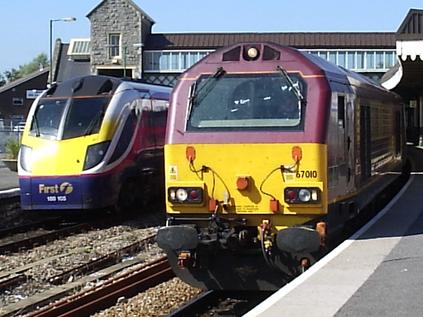 Blazing hot morning. Got up early to greet visitors, checked mail and dealt with a few chores around the flat, then headed out on the 1053 to Bristol, off for another session of Skip chasing. Started encouragingly with 67010 arriving slightly early at Weston.

Lingered at Bristol for the 1248 to Paignton, with 67006 doing the honours on 1V15. Temple Meads seemed strangely quiet today. Headed for my usual seat, and soon discovered why the front coach was near empty - no airconditioning, and a long hot journey from York! Explored some options for filling the time until 1V19 arrived including getting off at Dawlish and then back to Exeter on the Virgin HST, but decided the original plan of waiting at Exeter would at least present a chance to cool off and get a drink.

1V19 arrived on time, with 67002 in charge. Boarded for the short run to Paignton along the sea wall. Amazing sunshine, but again no airconditioning in the front coach. Began to wonder if this was some sort of anti-crank measure? Decided on a 'take no prisoners' approach to Paignton today! Refused to get bogged down in ruminations on Paignton visits of the past, and concentrated instead on working out how to get home. The timetable seemed to offer a connection into a Carmarthen bound service at Newton Abbot, but frankly I was sceptical. Tried the 1720 Wessex unit anyway, and soon discovered that the Carmarthen was only going as far as Exeter today. Waited at Newton Abbot for 1M28 which left Paignton at 1735 and would have been a simpler choice from the outset! Swift Voyager ride to Temple Meads, mercifully cooler than earlier trips today!

On arrival at Temple Meads, found southbound services in some disarray, with both an 1848 and 1900 service delayed. The 1848 Voyager arrived a couple of minutes after I did, so for fear of further delays I took the opportunity of a quick ride home. Overall, a successful day - managed to travel on three out of the four Class 67 hauled services and survived a trip to Paignton without psychological scars.
Movebook Link

Return of the Cursed Peds

A day off, and a spare day on a Wessex Rover. Slept very late, and set off on the 1134 from Weston to Bristol. During the week, 31601 had developed a major generator fault and was back at Derby. The replacement, 31106 was sitting on the stock at Platform 4. However, early indications were not good - with a 158 arriving in Platform 15. A quick announcement later, and a dash over to Platform 5 saw me surface just as the stock arrived with 31452 at the front.

Set off steadily, and all seemed well. Mysteriously looped at Bathampton - I assumed at first due to the Great Western diversions, but an announcement confirmed that staff at Bath Spa had spotted smoke coming from 31106. A dragging brake was quickly diagnosed, and the luckily very knowledgable crew of cranks up front managed to persuade the driver that this was not fatal. Howver, carrying a delay of over 30 minutes at Westbury meant the train was unlikely to make it to Brighton today.

Much confusion and changing of plans from here onwards. Talk of Fareham (seemingly the driver's preferred option) and Worthing as places where the train could wait and reverse picking up the return service. A report of a lineside fire between Barnham and Chichester put paid to that, but opened a rich new vein of speculation towards Fratton or Portsmouth Harbour.

My own plan to go from Southampton Central to Weymouth and pick up the other set of 31s to Bristol was likely scuppered now, so decided to go ahead if Fareham or Portsmouth were our destination, but to hop off at Southampton otherwise. Since a reasonably certain Barnham was announced, alighted and took some extremely poor pictures of 31106. Noted 1544 Weymouth was ominously 'Delayed' with no report, so decided to head back.

Decided to go for the 1533 to Swindon, via Melksham. Regrettably the usual 153, but made for a bit of variety, and it was much quieter than the preceeding 158 to Cardiff had been! Typically, the warm day became truly stifling as the poorly-ventilated unit trundled slowly northwards!

Off at Chippenham to find the 1725 back to Weston slightly delayed by a medical emergency at Swindon. Explored a bit in the sun, remembering spots from previously wandering around Chippenham Folk Festival on serious pain relief with a broken arm! After boarding, noted a truly stupid fellow trying to force the door open as the train moved off because someone had run alongside trying to catch the train! The guard yelled pretty colourfully that he should stop, but this goon did his best to force the central locking. The driver slammed on the brakes, but the guard steadfastly refused to let the latecomer board and once the door was secure, the train once again moved off. Not a popular decision with some passengers, but I think he was entirely justfied.

Back to Weston about twenty minutes behind schedule. A strange day, but undeniably interesting!

Finally managed to complete a job application form in time to send it, without dithering and wondering if 'the grass is always greener' and all the usual misgivings appearing. For the past few years, for obvious reasons, I've avoided change or upheaval at work wherever possible - not a simple task in our turbulent office. The idea of a future stretching ahead with more of the same, and more decent people sacrificed to defend one or two shaky reputations frightened me into action.

Sad thing is, and I know I'm repeating myself here, I really enjoy my work. I also work with some very good people. I suppose the important consideration is that I spend huge slabs of time at work, and it needs to be more of a challenge and less of an assault course. 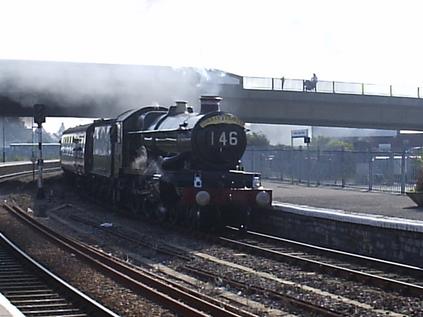 Out to the station for 0915 in good time for the arrival of 5051 "Earl Bathurst" leading The Torbay Express from Bristol to Kingswear. Intention was to grab a quick snap of the train arriving, then hop straight onto the 0930 for Bristol. Managed to do so, by virtue of the 0930 being a stock positioning move made up of a 158, a 150 and a 153 - this long train putting the front doors right next to my vantage point. Snapped rather randomly and boarded, not a fantastic shot but resolved to get the return working tonight.

5051 'Earl Bathurst' arrives on the down 'Torbay Express'

Alighted at Temple Meads only to realise that the front unit was due to form the 1015 Cheltenham Spa train, minus the attached extras. Boarded again, having decided a little shopping in Gloucester was in order. On my previous visit, I'd found the city centre on a Sunday reasonably quiet, easy to navigate and generally pleasant to wander around. Reminded that Gloucester was one of my early targets when I first began travelling around on the railways many years ago. Set off on time, but ominously halted several times on the bank up to Bristol Parkway due to congestion in the station - spotted a couple of 60s passing each other on freight or engineering duties.

On arriving at a packed Parkway, it was announced that a major signal failure near Charfield had closed the line northwards. Nothing moving in either direction. Eventually, our train was cancelled, and disappeared off back towards Filton empty. A London service arrived, discharging hordes of holiday bound (and somewhat inebriated in some cases) passengers from South Wales. Further anxious crowds arrived heading for the Test Match at Edgbaston and the Gloucester vs. Kent match. As more and more services were delayed or cancelled, the place became increasingly tense, and members of staff seemed to be getting quite violently abused in some quarters.

Finally things started moving. First northbound train was a Virgin service - slipped aboard and enjoyed much needed air-conditioning as far as Cheltenham. Changed and headed back towards Gloucester on a Central 170, shuttling back and forth between Birmingham and Gloucester due to engineering works at both ends of its usual run! Straight into the city, and the shops. As before, a quick dash into the record shop and bookseller. Time for a coffee break, then back to the station. Quiet, but far too warm run back to Bristol. Again managed to get off the train, only to reboard the same unit which then formed a Penzance service.

Later, headed out to the station again, with a rather glorious sunset in view. The return leg of the Torbay Express was reported running to time, and again there was a good turnout of photographers at the station. Still getting the hang of the Olympus camera, but even attempted a short movie. 5051 departed with a huge blast of black clag and a volley of camera flashes. 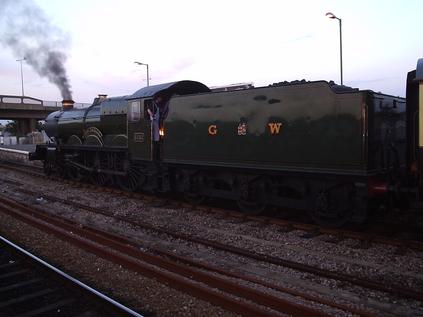 5051 back at Weston on the return service

It just remains to attempt to get a day off during the week to use up the last day of the Wessex Rover. Hardly epic travels this weekend, but plenty of variety. England also won another test match.
Movebook Link