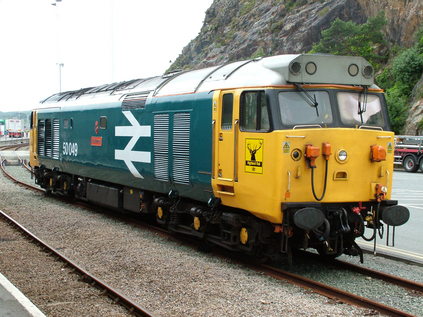 Hoover Haulage to the Harbour

A lot of miles have passed under the bridge this year, but so far it's been short of real events - no open days or galas have stood out as essential visits, and there have been few unusual passenger workings around here. So the return of locomotive hauled services to Fishguard for the Summer is notable - and well worth a trip to West Wales.

A fairly late start by my usual standards, hampered somewhat by festivities during the previous evening. Joined a small group of local cranks onboard the 0816 from Highbridge and half-dozed my way to Temple Meads. Over to platform 7 for the 0923 to Cardiff - a very hot journey which sent me snoozing again. We arrived at Cardiff Central in blazing sunshine to find a small but growing group of fifty bashers assembling on platform 4. Realised with some surprise that I hadn't been to Cardiff in over six months. Of course, besides the new ticket barriers nothing much had changed here.

My last Fishguard trips however, were in the Summer of 2004. Four trips in all - two of them abject failures, and two more successful attempts at locomotive hauled trips to the coast. The journey always seemed long and rather sweaty in the tired Arriva stock where the aircon rarely worked. The progress over the District Line is plodding at best. But for some reason, knowing this would be the first class 50 to make it out to Fishguard made this an occasion worth turning out for. More than pleased to see 50049 arrive at Cardiff, confirming that the trip was on.

Not much about the journey has changed over the last couple of years. The locomotive performed perfectly throughout the trip and we made steady progress - perhaps a little better than I recall the 37s making over the same ground. The sections of track alongside the coast made for good running and fine views, and rather sooner than expected we were slowing for arrival at the Harbour.

50049 runs around at Fishguard Harbour

The station here was much as remembered, but the cafe was closed, leaving us with a rather longer wait for lunch than planned. Lots of photo opportunities during the running round of the loco as usual, with a slight delay due to 50049 initially refusing to be removed from the stock. Noted lots of cranks running around for a shot of the off-side of 50049 which had been repainted to masquerade as 50012 for some reason connected with the recent Scottish tour. Once the loco was off and running alongside the road, made the customary dash to the other end of the platform to get the close-up as the loco thundered over the crossing to rejoin the train. Always an exhilarating and slightly scary proceeding! 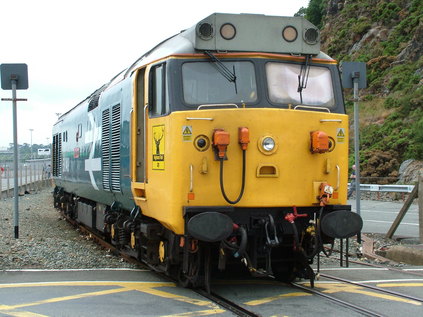 50049 is ready for it's close-up!
Back on board with slightly more passengers from the ferry than on previous runs. Raided the buffet trolley, but generally left rather unsatisfied with the catering arrangements. Should have purchased provisions at Cardiff. One or two of our group started to get a little cranky due to the heat, the lack of comestibles and the fact that we were being attacked for much of the journey by a five-year old boy in an adjoining seat! Again, some solid running throughout the return journey. No long wait outside Cardiff this year, so straight through to Central without a change at Bridgend this time around.

On to a boiling ex-Central unit at Cardiff, for a slow and drawn-out trundle into Bristol. Some strange noises from under the floor convinced us we might not make it in fact! Arrived at Temple Meads to find 6024 'King Edward I' awaiting a somewhat delayed departure on The Bristolian tour. Time for a few unsatisfactory pictures before an impressively noisy departure. Over to platform 15 for the HST back to Highbridge. A surprise ending to a day which went entirely to plan!