Whilst I have many obsessions, niggling irritations and obsessive compulsions, I don't really have many ambitions. Getting to Fishguard Harbour on a real train has become all of the above. People who know me in real life will know the frustration this has caused me, and regular readers will have seen my previous attempts fail.

So today, having little else planned and wishing to make a quick escape. I decided to try again. After hearing last week of 37417 failing and the train being cancelled completely, I figured that the law of averages pointed to things working out today. To be safe, bought a day return to Cardiff Central for starters. Changed swiftly at Bristol onto a Wales-bound 158. Just prior to departure a veritable armada of Spanish students swamped the train, providing an uncomfortable, cramped and noisy ride to Cardiff.

Arrived at Central to find the station in some disarray due to flooding overnight. The ticket office was closed completely, having suffered a torrent of water which worked its way through the trackbed above and into the building due to the persistent heavy rain. Purchased provisions and then got a day return to Fishguard from the solitary man with a ticket machine who was deputising for the entire booking office today!

Approaching 1016 and still the display showed Platform 7, there were no obvious replacement units on the station, and the growing crowd of notable faces indicated it might just happen. At just a minute or so past the alloted time, trusty 37419 rumbled in.

There isn't much more I can write about the journey to and from Fishguard which I haven't covered before, except perhaps to clarify the route of the return leg. It isn't booked via The Vale of Glamorgan at all - in fact the service runs via the South Wales Mainline to Leckwith Junction, then sits around outside Canton Depot for almost 45 minutes before heading into Central and thence to Rhymney. As we pressed on westward, the rain ceased and the sun came out. A pleasant run all-in-all. Its a pretty poor photograph, but for the sake of completeness here is a shot of 37419 having arrived, taken from as close as possible to the same spot as the previous picture of 158826. 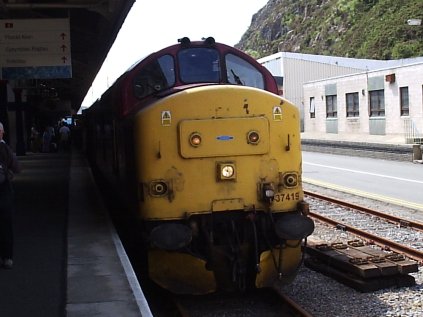 37419 at Fishguard Harbour
Sleepy ride back, including a change at Bridgend - a long fester at Canton might have been interesting but I just wasn't in the mood for it today! Noticed my occasional presence but relative silence has made me an object of note and some ridicule, but not unduly bothered. Pleased just to have managed to get this journey under my belt!
Movebook Link