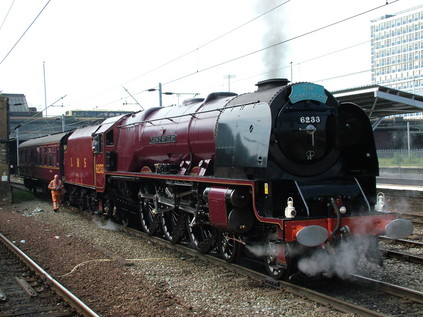 Another bewilderingly busy week, and another hastily arranged trip. In these kind of circumstances when I have no idea where to go and need to make a decision quickly, the lure of new track is often the easy option. So, continuing my bid to visit lines in Lancashire and Merseyside, I decided to head under the Mersey today and onto the Wirral. My profound fear of escalators has always prevented me from exploring the underground sections of the Merseyrail network, but recent visits have given me confidence in other ways of getting back to the surface at most of the stations!

A slight change to the routine this morning, running with 2M02 all the way to Bristol Temple Meads as 1S42 doesn't operate it's Weston stop in the Summer Timetable. Arrived on time and found the 07:28 waiting at Platform 3. Boarded, found my favourite seat and before we'd got to Parkway I'd managed to harass the RSM to sell me breakfast, despite him not really being quite open for service yet! An uneventful cruise through the Midlands and a rather busy New Street station, with Crewe the first port of call for me.

I know that for non-enthusiasts, Crewe is the ultimate joke at the trainspotter's expense. Why go to a rather tired, gloomy Cheshire town if not for the trains? Even though it is in many ways a shadow of its former self, Crewe continues to be an interesting spot. Today, it was the pleasant surprise of wandering up platform 11 awaiting the Pendolino to Liverpool, and finding the Duchess of Sutherland waiting for her train to arrive. Soon enough the coaches rolled in behind 47826 Springburn - another celebrity as far as I'm concerned!

6233 'Duchess of Sutherland' awaits her train at Crewe

No time to linger for further pictures as the Liverpool train, now on platform 6, crept in quietly beside us. Despite some of the Pendolinos in the Midlands being dragged by Class 57s today, we were unassisted. Found a nice seat next to the aircon in the quiet coach. Unfortunately found myself seating next to some irritating Liverpudlian revellers on their way back from London who were clearly still under the influence of something. Mildly amused by their weirdly self-obsessed behaviour at first, but soon tired of it. Last saw them wobbling around the concourse at Lime Street mumbling that everything was "mad" and wondering "what's going on 'ere like?". I wonder if they made it home - one of them was planning to 'borrow' a van I think!

It was stiflingly hot under the glass roof at Lime Street, and incredibly busy. Lime Street is up there on my list of 'real railway stations' where I could happily spend hours just watching people. No time today however, because the lift to the Wirral Line was out of action, which meant a swift walk to Central Station if I wanted to keep to my schedule. The city was heaving with people, and I notice the highlight of the entertainment seemed to be the chance to make rude gestures at yourself on the huge video screen in the centre, usually reserved for rolling news or sports events! Rebooked and descended into the thankfully cool tunnels under the city to await the train to New Brighton - the tiny seaside resort which sits at the northern tip of the penninsula. Once through the cavernous James Street station, we were in the long tunnel section which passes under the Mersey and deep into Birkenhead. Most of the stations have a strangely time-warped feel - with lots of brown plastic moulding. Tried to fathom out the junctions at Hamilton Square without a map and got confused. Soon enough we were out in the sunshine again, and passing the Merseyrail depot at Birkenhead North where a fair number of the Class 507 and 508 units were stabled. Arrived at the tiny seaside terminus and sorted out onward tickets. Briefly lured out of the station by the inviting aroma of a small cafe near by. Struck by the sleepy air to the streets around the station. Having played with the timetable, realised I could do the trip slighly more quickly and get back to Lime Street in time to shop for a Father's Day present, so decided to head back out on the next service.

Next destination was West Kirby - which meant retracing my steps to Birkenhead North. Over the rather decayed footbridge in blazing sunshine and only a couple of minutes wait for the next service. West Kirby seemed from my brief visit like an interesting little town - a small station with a sizeable concourse surrounded by shops, and a town centre immediately outside with some interesting Victorian buildings. No time to explore however, as the plan was to complete the final missing link on the Merseyrail network this side of the river. It's many years since I travelled on the line from Chester to Port Sunlight in order to explore the fascinating village. I recall wondering at the long, straight railway stretching into the distance above the rooftops of the village. Today's visit was short - after plunging back into the tunnels at Hamilton Square, changed and headed south through Birkenhead Central. Spotted the telltale architecture of Port Sunlight village after leaving Bebington, and wished I had more time to explore. Instead, only time to mark off the track and book a ticket back to Liverpool before the 1309 service from Chester appeared from the haze. This service would take me back under the Mersey, and around the deep-level loop line to Liverpool Central. Noted the odd arrangement at James Street, where the inbound platform is in a 'tube' separate to the imposing older station I passed through on the outward journey. Made a note to find some sort of history of the railways around here.

After wrestling my way into a packed lift and upsetting some pushchair-wielding mothers, made for Lime Street through a heaving city centre. The station was still baking hot, so having done the necessary shopping retired onto the already waiting 1438 to Birmingham a good few minutes early - just to take advantage of the air-conditioning. A quick and smooth ride back on the semi-fast Central Citylink service, using one of the neat Class 350 Desiro units. A slight air of chaos at New Street however, with lots of platform swapping and delays. Noted the 1642 Bristol service getting later and disappearing from it's platform - and I'm sure a fair number of passengers intending to catch it went unwittingly to Cardiff Central! My own choice of service, the 1712 Plymouth was unsurprisingly delayed behind the Bristol - all down to 'congestion at Sheffield' we were told. Once finally underway, we made fairly good progress in making up our 20 minute delay until Gloucester. We waited for some time at Barnwood Junction before giving up and passing an apparently stranded empty engineer's train which was blocking the junction. Made a very unusual reversing move at Gloucester Yard Junction, meaning we kept to our booked stopping pattern but increased our delay. Slightly concerned on arrival at Temple Meads to see the 1915 HST leaving ahead of us, but relieved to see it looped for us to pass at Bedminster. A swift same-platform change at Weston and home, only a few minutes later than planned.

A fairly swift, whistle-stop kind of day, but interesting nonetheless. Must get back to Port Sunlight soon for a longer wander around the village.