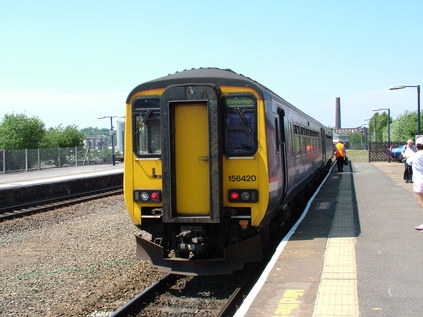 Parliamentary to the Pennines

Had the foresight earlier in the week to try to plan something for this weekend. Managed to find cheapish tickets for a circular jaunt up to Stockport and via the Parliamentary to Doncaster. Having had a couple of pretty gruesome work days, set out to enjoy the amazing weather we've been having. The start of the journey went a little more to plan than last week's football-fan interrupted efforts. A quick change at Weston, then a pleasant and unhurried breakfast on a fairly quiet 1S42. All went well until a little south of Bromsgrove, when we were checked at a signal. It turned out that there were reports of trespassers, so we were cautioned past the signal, but except for a couple of dog walkers (who appeared to be safely inside the fence) we saw no-one. Another stop at the next peg to report back, and the damage was done however, as we rolled into New Street about 15 minutes down, just as the 09:20 Manchester train was leaving.

Over to platform 5 via the Customer Reception where I got my ticket endorsed for the 09:48 Pendolino. An on-time arrival meant plenty of time to settle in for the journey. A fairly busy train by all accounts, which filled with a hen party and an unconvincing gang of apprentice would-be football hooligans at Macclesfield. Not sorry to get off at Stockport after an agonising wait for a platform which left me with a three minute cross-platform connection into the 'Ghost Train' to Stalybridge.

The usual bunch of neds and cranks on board for the last Parliamentary of the old timetable. We made a slow start, and seemed to hang around forever at Guide Bridge waiting for another unit to pass, with constant enquiries as to whether we were the Manchester train, given that we were waiting on the wrong platform as usual! Finally into Stalybridge, and oddly signalled into the through platform rather than the bay. Driver and guard appeared as puzzled as the rest of us, but it shortened the walk to the Buffet for a welcome (and this time rather quiet) pint.

I'd hoped for a 185 through to Leeds, but having not found the Saturday diagrams yet I left it to chance, and got a slightly tired looking 158 through Standedge Tunnel, bursting out into bright Yorkshire sunshine for the descent into Huddersfield and Leeds. A nice run, if not quite the traction I'd hoped for. Leeds was busy as ever, but with the first England game of the World Cup about to start things were thinning out fast! Shopped a bit and took up a sunny spot at the end of platform 6 to watch the world go by and grab a few pictures. Realised I was standing beside the very loco which would get me back to Doncaster on the next leg of my journey. 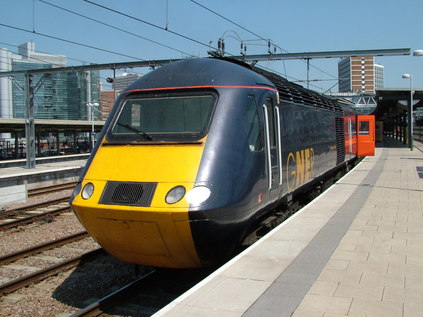 Just time for complimentary coffee before we arrived at Doncaster. Explored a bit to see what was happening - a few locomotives stabled here, but nothing major. Found my platform and settled in for the short wait, half wondering if I should try to get a picture of custom-built maintenance unit 950001. In the end, it was a little two far back from the platform.

Aboard the 14:55 Virgin service for the sleepy and rather too warm run into Bristol. Very quiet in my coach, possibly due to football fever! Some strange signalling choices saw us following not one, but two delayed stoppers en route to Cheltenham. By Bristol we were about 10 minutes down. Also sad that they didn't tuck the Voyager into the bay at platform 1 like last week, which would have been a novelty for me. Just by chance as I ambled past the screens, noticed that 1C50 was running late, and that I wouldn't have to wait for a later train if I made a dash for platform 15. Stumbled into the Coopers a little later for a relaxing pint. A fine day, with great weather and interesting travels.