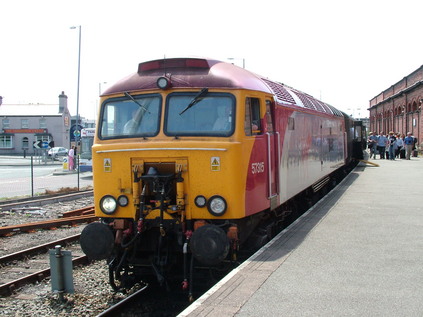 Roasting on the Coast

For some time, I'd planned to try to catch Arriva Trains Wales' locomotive hauled service along the North Wales coast. I'd even tried to factor it into a previous rover trip, but it didn't work out somehow. Knowing that I'd be effectively taking a weekend off for the upcoming Literary London conference this month, I plucked up the courage to pay the full fare for a trip to a favourite old haunt - Holyhead. There is considerable history for me here - from last year's Class 40 powered outing to numerous trips in the 1990s with Class 47 powered West Coast DVT sets and Class 37s. Hearing that the Arriva service might be reverting to a unit again soon made the trip all the more urgent.

A warm and brooding start to the day, with some grey skies overhead. Usual start and onto 1S42 from Bristol. Much silliness with the on-board shop however which didn't open until just prior to arrival at Cheltenham Spa! Managed a late breakfast and settled in for the ride up to Warrington. Arrived a little before time, and wandered over to platform 1 in what was now quite extreme heat. Noted lots of very well turned-out types and surmised that Chester Races were on today. A little after time 57315 'The Mole' crept in at the head of six coaches of ex-Virgin Mk 2 stock. What followed can only be described as a stampede. A rush for the already packed coaches resulted in a severely, maybe even unsafely overcrowded train. The rear two coaches of the rake were locked out due to some short platforms en-route - where I'm not sure, unless it was at the additional stops we made at Runcorn East, Helsby and Frodsham. These stops proved problematic in themselves, with even more passengers trying to press onto the train. We tried to tell them there was a unit to Llandudno following, but they'd have none of it. Arrival at Chester was equally traumatic. Hundreds of race-goers trying to alight whilst equal numbers of holidaymakers made a surge for the empty seats. A bunch of us were forced to step outside to let people safely pass - and not everyone managed to get back onboard. Staff in general seemed disinterested and just let things happen, dispatching the train with people left on the platform. Unbelievable scenes, and sadly indicative of the morale of Arriva staff.

Having survived the crush at Chester the next problem became apparent - no air-conditioning. Sweated and suffered my way through the remainder of the trip, made worse by the moans and groans of other passengers - one of whom was convinced we were all going to be seriously ill, and delighted in telling everyone her theory that we'd all be 'rushed to hospital' because it was so hot. Blanked out the droning by enjoying the stunning coastal scenery, passing Kinlet Hall in steam at the Junction, and most particularly hanging my head out into the welcome breeze as we passed over the Brittania Bridge high above the Menai Straits.

Arrived a little late, very hot and fairly exhausted at the terminus. Watched our loco run around the stock, then - with only minutes to spare, decided to wander over to the snack bar. It's a good thing I did, because in their wisdom, the powers that be at Arriva had substituted 175101 for the loco-hauled set on the return working! In fairness, it was probably in the best interests of the customers who had a couple of hours in hot sweaty carriages, but for me it was a disappointment. On boarding, some benefits were immediately apparent - a blast of icy cold air signified working air-conditioning. Found a spacious seat in a fairly lightly loaded train beside some passengers heading for Glasgow, and settled in for an uneventful trip back the way we came - not in nearly as much style of course! More strangeness at Chester however. Seconds before we exited Windmill Lane Tunnel just outside the station, the guard hastily announced that the service would terminate at Chester. The people from Glasgow were thrown into confusion - they'd booked assistance with luggage at Warrington, and had tickets for a service from Bank Quay. As I made a dash for the Crewe train, I tried to find a member of staff to go and help them - but once again Chester station proved to be lacking any form of customer service - despite the fact that a train on a fairly infrequently serviced route had just been cancelled and people needed information and help.

Not sorry to leave the melee at Chester and head for Crewe. Another hot train - this one a 153 with every hopper open but no air. Noted 46035 at The Railway Age as we passed into Crewe station. Half thought about wandering a bit, perhaps getting a picture of the other Thunderbirds, but a swift check of the departure board noted 1V61 heading for Penzance delayed by fifteen minutes and arriving imminently. Weighed up my options swiftly, but decided to go for it. A breathless dash over to platform 5 later and I was boarding the train. Smacked immediately in the face by a wall of humidity and heat. Staggered down to the First Class coach with the intention of upgrading, but found it full of people escaping the heat - and one particularly annoying woman who tried her best to prevent us from even getting into the carriage! Headed for the quiet coach and found the same situation. It seems that a failure of the aircon in coaches B,C and D meant everyone had moved to the end coaches. Virgin staff did their best to keep us informed and to dish out water - but the water always seemed to run out just before it got to me! I wasn't sorry to arrive at Temple Meads today.

Just when it seemed like the day had produced it's last surprise, there was a last twist. 1C50 was delayed by well over fifteen minutes coming in from London, and it looked after some educated guesswork like the 1825 service would leave first. This is the train which sits for 20 minutes in Weston-super-Mare, awaiting the passing Voyager. Its a useful service if you're on the connecting Voyager - but its not fun to sit in a stuffy ex-Central 158 in this weather! Literally seconds before we left, heard the announcement that 1C50 would proceed but would not call at Weston - presumably because of the congestion and delay due to us and the Voyager blocking the place up. Once the plan had been confirmed by the information screens at Nailsea and Backwell, decided to jump ship at Yatton and await the following HST which made a rare trip on the Weston avoiding line. Met a fellow crank on board who'd come home early just to do the same thing.

A strange mix of a day - despair at the situations in Chester, exhilarating moments on the ride over to Holyhead, and something close to heat exhaustion during the trip back to Bristol. A trip on the coast is always eventful and never dull.