The Truth Slips from Sloping Shoulders

Once again, work confounds and unsettles me. I had another bout of the 'you don't do much' or 'you're not as stressed as your colleagues' commentary today. As I later mentioned to a colleague - I'd be less bothered if these people had an inkling of the things I'm involved with alongside the day-to-day workings of the department. It doesn't usually get to me, but in the context of today, it took on a new significance.

We had a meeting of Senior staff, at which plans most secret and only previously hinted at were given a (premature?) public airing. With my own discussions and piecing together bits gleaned and inferred I'd got to much the same conclusions, but this adds a difficult and challenging dynamic to the team right now. The timing of this remains somewhat questionable.

So, the future is exposed rather prematurely, the team are already taking their corners and I'm left wondering if this is worthwhile. People tell me it most definitely is. Time will tell.

Hey, thanks everyone who sent abusive mail after yesterday's rant about the Flag of St. George. Most entertaining.

Here is a far more interesting, and to recent correspondents, probably even more infuriating article from a fellow flag fan published in today's Guardian newspaper. 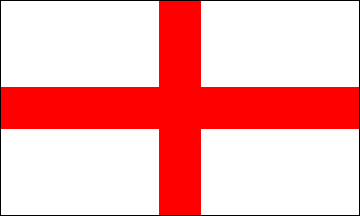 Among the Dark Satanic Mills

This is the Cross of St. George, the National Flag of England:

For some reason, it has become associated over the years with the extremist right, with racial superiority and frankly, with little to do with the modern, multicultural England in which I live.

It is therefore, encouraging to see it rise again (albeit due to a football tournament) as a symbol of Englishness. I think most English people are big enough to shoulder the burden of history, and to be aware that the actions of our government or armed forces have not always been pristine. The simple fact is, I'm English. Its taken me an awfully long time to be proud of that - and before they are levelled I must point out that the accusations of racism I have weathered have more than tested me - they've cost me a career and several years of my sanity after all!

The point of this rant? Well - I was moved to write to the BBC about this today too. Why do people adorn their car, desk or home with the Cross of St George augmented with the word "England" emblazoned across it? Its like writing the word "Car" on the side of your Volvo estate, or shaving "Haircut" into the back of your "Hoxton Fin! Let the flag quietly make its own statement, its almost indecent to turn it into a sports club emblem. I'm not asking for this kind of treatment or anything nearly like it!

There is, after all, nothing wrong with being English. Now, about that National Anthem...

Went to see my nephew this evening. In the couple of weeks since I last saw him he has grown a great deal. Still seems unbelievable that its only five weeks since the desperate panic around his birth. He seems to be a contented little fellow too, quietly sleeping through the raucous attempts of my entire family to wake him up!

Arrived at Highbridge & Burnham to find my train home cancelled due to a failed unit. Suspect it may have been the ailing 143611 from yesterday, as the weekday evening service is usually the preserve of these units. Pleasant evening to wait around and relax, following an initially frustrating exchange of calls with Wessex Trains. Later, they became much more helpful, and about an hour later (but still 45 minutes before the next train) a large green coach appeared. I was the only passenger from Highbridge to Weston, so I chatted to the driver - who has a rather nice little business doing tours around the UK and Europe which he enjoys so much he doesn't want to retire!

Ordered a couple of books to get me up to speed before The Literary London Conference, although how I will find time to read them at the height of the appeals season is debatable!