What Did Your Last Server Die Of?

After a couple of weeks of messing around, the mikegtn.net server is finally up and running once again. After almost four years of trouble-free running, and with parts dating back much longer, I noted things were amiss a couple of weeks back. A quick swap of the power supply seemed to fix things, but eventually the little 16Gb Maxtor hard drive finally gave up the ghost.

I got things up and running fairly swiftly at first, but soon stumbled into trouble attempting to get Cyrus IMAP configured and playing nicely with Postfix and the various other bits of the mail system. It's been years since I played with these systems, and with my much tampered-with config files now gone and my skills very rusty, I floundered a bit at first!

Finally, today I managed to get the last bit of the puzzle going, and salvaged some final bits of data for this site. Everything should be back to normal, and given that I've had precious few hours to fiddle with the box I'm happy with the results. Finally, the machine really is a server, with no X or GNOME at all. Given it's age, the performance is pretty incredible. 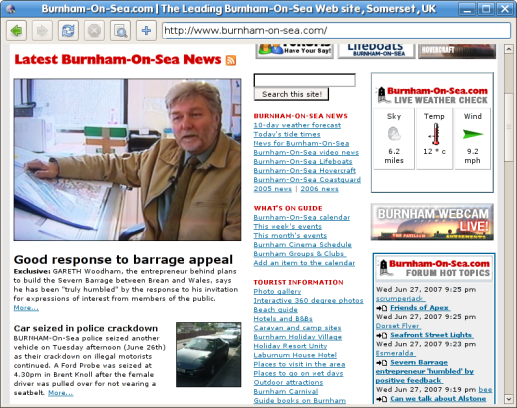 Many years ago, as part of a project to make lots of tiny applications, I wrote a web browser. It linked with the Gecko rendering engine from Mozilla and even though you had to have a whacking Mozilla install around, it was a quick and useful way to view URLs from chat programs and suchlike. FuzzyTheBear loved it, and spoke highly of Denzil far and wide - and a fair number of people downloaded it and used it for simple, quick tasks. The source code has lived on this webserver ever since, and I've dutifully moved it when hardware has changed or the site has been updated - but it's fair to say I haven't thought about Denzil for a long time!

Last night, I wandered into the #lemmings chatroom on Freenode to see which of my old friends was around. It's been a while, and following a few turbulent times lately I felt like I needed to catch up and relax a little. It was good to see some old faces around, and I was welcomed back into the fold like I hadn't been away. Later, when I was happily chatting and completely off-guard Fuzzy posed the question:

Could Denzil be compiled against a modern Firefox or Mozilla installation?

I'll confess I've wondered myself in the past - and even experimented a bit, and I shared my thoughts on how it would work. We even managed to get it building and running - but things had changed a little and it crashed on https:// URLs. We also talked about how the configure ought to try to check for Firefox or Mozilla and proceed accordingly. After agreeing this would make someone a great project, and remarking on how I'd used mental muscles which hadn't been flexed for years, I slipped off to bed happy to have chatted with friends again.

Well, a curse on FuzzyTheBear because I think he knows that once he'd woken me up and placed the trap, I'd fall right in! I never could resist a challenge, and tonight in an unguarded moment I set about figuring out why Denzil crashed on secure sites. I soon cottoned on to it being something to do with the Firefox and Mozilla profile system, and found a neat fix by looking for a user profile in .denzil. If it wasn't there, the libs were smart enough to set things up. Great! Next I tried to fix up the configure script. This was tougher, and the arcane syntax took awhile to resurface from the depths of my mind. After a bit of playing, tweaking and research I got the application to check for either Mozilla or Firefox, but always to prefer Firefox - because it just seems lighter and neater to do so. Inspired by this success, I fixed a bunch of warnings and complaints caused by building an ancient package, and even got the .desktop file installing correctly into the Applications menu.

Soon, not noticing how much time had passed since I sat down to 'just see if I could fix that bit...' I found myself bumping the version number, writing up my ChangeLog entry and doing make dist...

Looking at the local news with Denzil

Denzil still does what it always did, still has its funny 'self-contained' bookmark system, and still relies on wget to download things because I still haven't managed to figure out a smarter way. Best of all though, the stripped binary is still less than 20Kb in size! I'm sure that there are still lots of ways to break it too, and I'd be interested to hear of them - but for now it seems to work well enough.

You can download the source code for denzil here:

If you find it useful, I'm glad to be of service...and don't forget to thank FuzzyTheBear for knowing just which buttons to push to get me working!

When asked what I'd like as a gift this year, I had no ideas at all. Then, while browsing Amazon I remembered a neat little device someone at work had mention some time back, which would play streamed music from a PC via a wireless network. Having done a little research on Slim Devices' Squeezbox, I was intrigued to discover that it was powered by a clever little Open Source server which was actively developed for Linux in it's various flavours. I also noted some neat Internet Radio related touches, including the ability to access BBC Radio's 'Listen Again' catalogue without recourse to their painful web player. This was also one of the only devices of this or similar types which didn't seem to have a single bad word said about it anywhere. I was sold.

The Squeezebox in action

So far, things have gone well - the Squeezebox discovered almost all of its own network settings except of course the WPA key, the server software was simple to set up and the quality of the audio is excellent. I'm really impressed with how solid and well put together the unit and the remote control feel too. I had some brief problems with the box losing network connectivity today, but I think that was probably of my own doing, and some tweaks to network settings seem to have cured this entirely. If I lived somewhere larger, I think I'd be looking for one of these in every room. Time to buy more storage space and start digitising more of the collection...

All sorts of things planned for today which didn't quite come off. Firstly to be in London, but my stupid and annoying illness conspired against that. Then to be in Newport, but general confusion and a desire to stay warm and recuperate scuppered that one too. So, nothing to do but stay here and work on some bits of the Movebook which have been bugging me for a while.

Dusted off my PHP skills, and added the 'via route' option and made the mileage pre-filling code cope with routes we've used before. Mucked about with some monthly mileage reports, and finally plugged the stock reports into the user interface. Along the way, did some tweaking to Areopagitica too to keep pace, and lots of general database maintenance.

So, I still have no voice and a stupid sounding cough, but version 2.0 of the Movebook is here, with whizzy reports, cleverer recording of routes and easier ways to get to things.

You can enter the Movebook here.