Messages from Beyond the Internet

The Colas Class 47 visiting the bay platform at Weston spurred me to write an entry for this blog earlier which I mentioned in a post to the South West Rail Gen Group. I also indicated my dismay that I had no idea what date I took the picture on. Photography wasn't a big hobby for me then and I was three years away from owning a digital camera which would free me from the frustration of waiting for a film to be developed.

Amazingly, the message elicited a response from Tony Hughes, a local who posts regularly to the group, giving the date as 2nd May 1997. This fits into my memory of a strange time - I'd just fought an election campaign, stayed up all night at the Wells Constituency count and turned up at Bridgwater Town Hall for the local election count which I lost - but not desperately embarrassingly. I was on my way to my grandmother's house in the Midlands. When I got to Redditch station I was so exhausted I got a taxi to her house, which caused quite a stir on Batchley estate! I can't remember why I had my camera, perhaps I'd wanted to capture something of the atmosphere that night?

A lot has changed, but how amazing that this history is all out there in the information democracy. 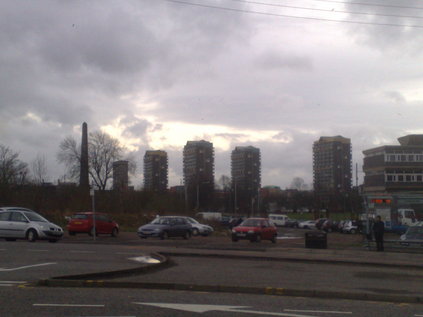 Ticking the Boxes in Glasgow

Another trip to Glasgow is over, and as ever I'm confused about my relationship to the city. It's not a case of being hooked by mythology - my usual entry point - as when I first turned up at Central Station well over a decade ago I had no preconception of the place. My earliest memory of knowing about Glasgow was in fact looking at my dad's discarded 1976 AA Road Atlas and marvelling at the swathe of urban motorway cutting through the city. Moving forward, as a rather underpaid railway enthusiast in the 1990s it became a target of sorts - to reach Glasgow and to tick it off the map, probably the furthest north I'd ever journeyed at that point. However, somehow I've never quite managed to tick Glasgow off, and I've continued to return year after year.

This trip was rather different. Organised as part of a birthday outing for a friend, the responsibility for finding constant entertainment and sustenance fell heavily on me. Add to this the need to fly to Glasgow rather than to arrive via the time-honoured processional route over the Clyde into central, and there was much which might have been unnerving. As I stepped onto the tarmac at Glasgow International on Friday evening however I knew things would be fine. A light flurry of snow around me, I marched purposefully ahead and instantly adopted my role. I knew though, that some of the wanderings I'd perhaps wish to undertake myself would not happen this weekend. An excuse for a further visit.

A desolate view from London Road under brooding skies

Our party was also made up of Real Ale fanatics, and it was also therefore my unenviable task to ensure that only the finest establishments were visited throughout the trip. This was no great hardship of course, and we managed to visit a fair number of venues over the weekend and sample a good few Scottish beers which are unlikely to make it over the border and home. For me though, the interesting part was the journeys between these watering holes - encouraging people to look up at the buildings, or to enjoy the spectacle of views along certain streets. I've remarked before that I'd make an appalling guide - too caught up in the place to see it through a strangers eyes.

The Open-top tour bus also served us well, despite the eye-wateringly cold climate and the threat of snow, we circled the city from empty brooding east to opulent west. Allowing someone else to be the guide gave me time to sit back and experience again the thrill of visiting the city from a newcomer's viewpoint. It was hard though to pass the less-travelled roads and not hop off and hurry away. This wasn't that kind of trip. 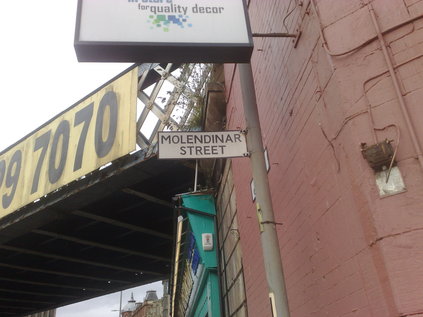 The only inkling of what lies beneath the streets

So as I boarded my flight home in driving rain, with heavy heart and leaden boots, I speculated on the success of the trip. Everyone seemed to appreciate the city as being somehow different - but I'm not sure how far my ramblings influenced this outcome. We drank a lot of beer, covered a lot of ground, and saw a great deal of the city. Perhaps for some of the party that is Glasgow 'ticked off' the list. For me, it's never quite that simple...

Are You Coming Over for Christmas?

It's become customary over the past few years for me to update the old daylog on Christmas day. Not so much because of any specific significance of the day - but it's served as a marker, and a rare moment of peaceful reflection. It's been a much more settled festive season for me this year - with work issues finally less directly painful, a few fantastically funny nights with good friends, and despite the persistent coughs and colds, almost all of us healthy. Naturally this didn't stop me finding the whole occasion particularly emotional where my nephew was concerned - and his ever growing understanding of the world, sense of comic timing and social confidence continue to make me proud and honoured by his presence. Most of all, I'm excited by the thought of the next addition to the family because I think he'll make a fantastic big brother!

So, as I face a year of potential financial upheaval amongst other challenges, my immediate thoughts turn to a number of planned excursions - not least those to Glasgow - and the soundtrack of Belle and Sebastian's rather wonderful Are You Coming Over for Christmas? seems appropriate. Despite the aches and pains, coughs and sneezes and trials and tribulations which led us here, it's been a calm and peaceful day.

I'm no longer accustomed to baring my soul in these entries like I used to. Somehow the arrival of the blogging phenomenon made the idea of the original c.1999 'daylog' seem painfully self-conscious and eventually just obsolete. However, for a brief change I'm going to stick my head above the parapet and talk about me rather than where I've been or what I saw. No train pictures, none of the shielded allusion and coded sentimentality of the usual entries.

The bottom line is I've had a really positive, busy weekend. You won't see that kind of unqualified statement much here, and I feel the need to explain to an extent. When I left Weston, things weren't great, but a new job and a new place to live offered a chance to start afresh once again - I've been lucky like that I suppose. Now, the job is more challenging than ever and I'm feeling tested almost to the point of incandescent anger by it's politics, but I can take refuge in a place I've carved out for myself in my home town and my community. When I first moved here, I think people felt I immersed myself in my local pub out of pure desperation and barely disguised alcoholism. It wasn't so, I met decent people who I'm proud to say are now friends and acquaintances. Over the past year, my family has been tested too and has gathered ever closer together which has also changed life much for the better.

Things move on and times change, and I realise that I'm no longer the solitary character I'd become in the final days in Weston. I spent Friday with friends who I rarely see altogether and away from professional circles, and had a silly and entertainingly drunken Saturday. Today I saw my family, and spent a rare sunny afternoon watching music on the Town Green until the jazz band scared us into leaving despite the cheap beer. In short, I had the kind of normal, happy, carefree weekend which people are having all over the place, all the time. It might not sound particularly special to most.

But it was, and now it's back to work to face more of the impossible challenges. The difference is, nowadays I look forward to the weekend - whether it's spent at home or travelling the rails.