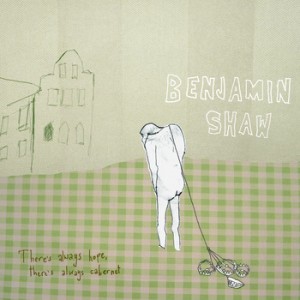 This blog doesn't generate huge amounts of feedback, at least not much that the spam filter doesn't happily discard for me because it involves enlarging at least one body part. However the two issues it does generate some occasional heat around are its unremitting praise for things, and its geographical focus. I've covered the former in bitter tirades before - I don't write about boring, dull or uninspiring things by choice. The second is tougher to explain, and is as much to do with personal circumstances as anything - but when I have defended the blog by mentioning the occasional forays south of the border, I realise that very rarely do I get further south than Lancashire. The county crops up again and again in my ramblings, and indeed it's the place of origin for the enigmatic Benjamin Shaw. He's now based in London, but this record is unmistakably something of the north. From it's grim humour and its stark, wide open but sometimes mist-obscured soundscapes to Shaw's warm but broken vocal style, it's never far from the challenging landscape of the county. You can take the musician out of the place, but perhaps you can't take the place out of the musician?

The scene here is set by "How To Test The Depth of a Well" which musically consists of a queasy, damaged waltz punctuated by scraping violins and rattling percussion, while Shaw intones a mournful but redemptive list of do's and don'ts culminating in the observation "You shouldn't make up stupid songs just to get applause". There's nothing stupid about this it's clear to see, and this quiet and almost distracted delivery is about as far from attention-seeking as it's possible to get. Sometimes almost drowning in pops, crackles and electronic buzzes the song reverberates with warm humour and turns its ramshackle origins to clear advantage. "Interview" opens with uncertain, quavering vocals and another compelling violin dirge of the type which pepper the record and give it a melancholy timbre. Meanwhile a lone guitar plucks a melody which isn't a million miles away from the Twin Peaks theme tune. The lyrics illustrate the curious talent Shaw has of taking a fairly mundane episode out of the context of everyday life, elevating the consequences and the apprehension to become the central drama in his songs. This particularly sorry tale ends just as abruptly as the protagonists job prospects appear to. When all of the elements of "There's Always Hope, There's Always Cabernet" drift into focus - like they do here and in countless other spots - it's simply and unnervingly lovely.

Linking directly back to its place of origin, "Somewhere Over The M6" is a minor epic. Drawn out over six minutes or so, and marching along at a funereal pace, Shaw sounds intoxicated and beaten here which makes it perhaps even more compellingly voyeuristic listening. I'm also struck here by a kinship with artists such as Thirty Pounds of Bone and Sweet Baboo who are ploughing similar furrows in a wholly different geography, and using music which sometimes sounds as old as the hills to express entirely modern sentiments. The addition of shattered, ill-governed intrusions of electric guitar build an uneasy drama here, and the extended squalls of noise which end the song blur into, and almost entirely make up the following instrumental interlude "An Exciting Opportunity". Unhinged laughter and an apparently untuned piano bring in "Hey, Where's My Deputy?". A slightly dizzy, rather uncharacteristically summery melody supports Shaw's quietly introspective half-spoken, half-sung observations. It's brief, perhaps even unfinished, but tells a complete enough story. In a curious way it's got hints of country and western in its DNA, like hearing Hank Williams through damaged speakers on a market stall. The song finally implodes and disappears into a haze of tape hiss and feedback. A lyrically graphic depiction of childbirth - and oddly enough a strong case for home birth - provide the opening images of "Home", a more traditionally constructed ballad built around a minimal melody and a distant, fractured vocal. A harmonium winds in to support the fragile guitar and adds a sense of timelessness - the themes and lyrical preoccupations are absolutely 21st century, but the music sounds like it could have been drafted in from a wax drum discovered in an attic somewhere. It's perhaps the furthest that Shaw's songwriting falls from the more evidently directly personal, drifting rather unusually into the third person, but it's no less bleakly funny and hard-edged for that. This all builds into a cacophonous, but satisfyingly dramatic ending.

While the title of "The Birds Chirp and The Sun Shines" displays a fair bit of irony, there is a sense of bitter triumph in this. Shaw's vocal is oddly confident, in contrast to his lyrics which are resigned and beaten-down. The track trots along with a little more pace than those which precede it, driven by a crazy shimmer of violin and a simple melody. Somewhere, mid song Shaw observes that he"...never wanted to stare into the abyss" before appropriating Kool and the Gang's exhortation to "celebrate good times, come on!" for his own purposes. This pretty much sums up "There's Always Hope, There's Always Cabernet" for me - yes, it's dark and it doesn't seem to hold onto any of the optimism it's title implies, but there's plenty of scope to enjoy the gloom while we still can perhaps. Finally, the sprawling and ambitious "HULK" arrives to close proceedings. Led by an echoing piano and a multi-tracked vocal which strains at the confines of the low-budget production, there is a hint of the damaged genius of Brian Wilson about this performance - the difference being that Shaw's feet are firmly on the ground without a surfboard in sight, his songs anchored in a particularly British strain of dark, bitter delight in misfortune - most notably our own.

It's always good to know that I can still be surprised, despite my advancing years and growing cynicism, and despite a sometimes pretty bleak musical landscape this early in a new year. So when I received the email introducing Benjamin Shaw full of self-deprecating northern humour, I was perhaps unprepared for just how this strange little recording was going to affect me. But from the outset this is clearly something pretty special which repays the effort of listening - and to fully appreciate how these songs are built from layers of found sound, recording artefacts and gently uncomplicated instrumentation it's necessary to don headphones and completely immerse yourself. But be warned it's also full of rough edges, sharp corners and exposed nails to snag your jumper on - all of the things in fact, which the health and safety experts warn you about.

You can purchase Benjamin Shaw's debut album right now from Audio Antihero as a physical CD or digital download.


Benjamin Shaw - How To Test The Depth Of A Well