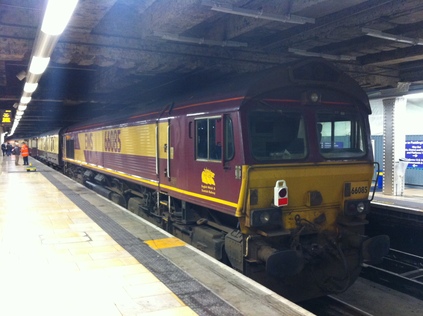 Less than a month into the year and I'm writing about my second railtour - this is far from the usual course which January takes. However, years back when I had a lot less ink in the atlas I used to see start the year by how many weeks I could keep up the practice of covering a new bit of track. For a while now, that's just not been possible given all the easy bits are covered, but this year would have been a pretty good one in those stakes by all accounts. I found myself in Watford once again this morning, with an early start ahead of me. Staying in Central London had proved pretty costly when I set things up for this tour in October, with a Travelodge sale being announced after the fact, but I had a comfortable Premier Inn bolthole in familiar surroundings. The only drawback was the long, dark DC lines slog into town first thing, but with headphones on I was soon coasting into Euston and heading for the bus across to Paddington where the tour started. Plenty of time to breakfast, watch the day start and witness an assembly of rather odd looking cranks descending on the Upper Crust concession the second it opened. It's times like this that appearing relatively 'normal' in the rail enthusiast world is a welcome choice. Instead settled down to coffee and wandered over to the stock which had arrived early.

I don't travel often with UK Railtours, but the increasing number of 'Forgotten Tracks' trips which they operate, and the recognition that not all First Class passengers want dining has opened a few more of their trips to my interest lately. This one was a winner from the outset, reflected in it being fully booked very quickly and a re-run programmed for next week - almost unheard of in these austere times! With a couple of winning locos - one which had reputedly never worked a passenger service before - and a realistic itinerary all reasonably comfortably achievable in the short winter daylight, this was going to be a good one. So, out of Paddington on time for the short run into Southall Yard where we reversed for the first of many times today. The branch to Brentford Goods curved behind the sheds and workshops of the preservation group, with a couple of the Class 08 shunters which had been involved in the production of The Railway Children at Waterloo International spotted on site. Then we pulled alongside the Grand Union Canal, passing under Windmill Bridge where three tiers of brickwork see the railway, canal and road stacked together in an impressive engineering feat. The lines began to fan into a range of sidings before the end of the branch in the West London Waste terminal.

66085 in the gloom at Paddington prior to the tour

A swiftly accomplished reversal took us back to Southall, and a brief run along the main line to West Drayton, where we took the line at the far north of the station which would once have served Uxbridge trains. The line curved tightly to the south, with little trace of the former junction, passing under the mainline and heading towards the perimeter of Heathrow Airport. Progress was slow, with points being clipped ahead of us as we passed - but the operation was pretty efficient, with a single Network Rail operative managing the whole process on both of the branches so far. We were soon cutting along at a faster pace as we entered the curious section of line which passes through the M4/M25 interchange. The huge four-level stack junction was constructed with the two lowest level sliproads running along the fringes of the single line at ground level. This gives the weird sensation of having high speed traffic zipping past both sides of the train in the wrong directions! However, it's a tribute to the ingenuity of the engineers and planners that this freight branch was stitched into the complex road works rather than being closed or diverted from it's historic route. We slowly made our way to the terminus, this route being protected due to the Elf Oil depot. With the loco practically touching the gates to the facility, we turned and headed back towards the mainline.

We now made a circuit of north west London via the mass of lines which tangle around Willesden. This has always fascinated me, and no amount of coverage on numerous railtours and diversions has every quite led to a complete understanding of how it works. However, with Quail maps out and some eagle eyed companions, we plotted out course which took the lesser used connection from Acton Canal Wharf down to Willesden No.7 Junction. After a tiny burst of speed on the West Coast Mainline we crossed under the fasts and came to a rest near Wembley Depot. The tour was almost in two parts, with this marking a crew change and the start of the second half so to speak. Once underway again we headed north. It was now a remarkably bright afternoon, with the few tiny showers we'd had earlier soon dispelled. Thundering past the hotel I'd left about eight hours earlier at Watford, we made our way out into the Buckinghamshire countryside. Once through Milton Keynes Central we slowed, coming to a stop a little shy of the platforms at Wolverton. This is where things got complicated! The layout here is essentially the remains of a flying junction which connects the works to the mainline. However, the road allowing entry from the Down Slow has long gone - its alignment still apparent on waste land, before disappearing under new flats and a large Tesco. The connection to the up lines rises between the slewed pairs of tracks, but is connected only from the north - essentially the 'wrong' end. Thus we now reversed into the 'Incline' siding, before turning north again, and taking the steep grade which dips into a brick culvert and passes under the lines. Emerging to the west of the mainline, we passed the point where the lost 'down' connection would have trailed in and proceeded along a straight beside a road and much new development. Some warehousing here had been recently built - or perhaps rebuilt - in the style of the original and once vast carriage sheds. We finally entered open waste ground as the extended headshunt of Haversham Bank curved back in towards the mainline - of which is was once a much straighter and more direct part! The connection to the works trailed in from the left, still a vast site despite it's much reduced output and rather uncertain future. Parts of it lie derelict and are, it seems home to an unofficial BR museum of sorts!

So with today's rarest of track covered and the record set right after the cancellations which followed the unceremonious scrapping of the Wolverton Works Open Day a couple of years back, we headed back south via the reverse of the complicated manoeuvres we'd taken to access the works. For me the final part of the tour was less novel, having covered the flyover at Bletchley previously - but as the daylight was holding it was good to be seeing where we were heading this time. At Denbigh Hall Junction South we peeled away and climbed behind Bletchley station, curving west over the unloved but impressive concrete viaduct which stands as a folly to BR management - opened to keep the Oxford-Cambridge 'Varsity Line' traffic from crossing the WCML on the flat, it soon foundered - the 'modern' hump yard at Swanbourne sensibly knocked on the head as those at Tinsley and elsewhere were proving less useful than expected. Then the passenger trains ceased too, and now the line proceeds only to a run-around at Swanbourne where interested neighbours poked their heads out of windows and waved at us. The line doesn't end, but from here through to Claydon it is unused - and having frustratingly visited both ends, there is hope that the now funded East-West Rail project may join up the gap and provide Oxford-Milton Keynes services, with ambitions to restore the final but more complex link to Cambridge too.

Reversing once more we headed back over the viaduct with the sun beginning to set, then down the eastern arm which descends to join the line to Bletchley. At Fenny Stratford we reversed again, curving back to meet the mainline near the now almost abandoned Bletchley Depot, still kept remarkably tidy I noticed. Finally we had the fun of a fast run into Euston arriving a surprising ten minutes early - with the odd novelty of a railtour finishing before 6pm. However, it had been an incredibly successful day - mostly on time, all of the interesting stuff done in daylight and exactly as planned and described. I don't do many of Mr Farrow's trips - because they start in London most often, and have few non-dining options primarily - but the reawakened 'Forgotten Tracks' programme has provided some gems in recent times. Long may they continue to provide fantastic days out like this one.