Single Ticket #6 - There Will Be Fireworks & So Many Animal Calls

I realised recently that one reason this blog will never be wildly popular or highly regarded - aside from my contrary tastes and over-complicated ramblings - is just that I'm too damn slow! I could of course pretend that this is some sort of defiant refusal to play the industry game, choosing to do things at my own pace. But it isn't - it's pure laziness and navel gazing, with a dash of irritating real life getting in the way too. No amount of new year's resolutions are likely to get me to pick up the pace, but perhaps it's time to not worry so much about how timely these reviews are, and just get on with listening to interesting music? With that in mind, here are a couple of things which keep cropping up in my playlist just now - one which from the tail end of last year, and one so new it's not even available yet.

There Will Be Fireworks - Because, Because EP 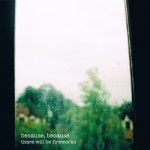 In keeping with the theme of my ponderous pace, I remember stumbling almost accidentally across There Will Be Fireworks majestic first album, far later than the rest of the world, and being amazed that something so striking and explosive could have escaped my attention for so long. Regular readers will know that I spend much of my time apparently stumbling around the internet with my fingers in my ears, so probably won't be surprised. But that record was packed with swooping dynamics, huge crashing guitar endings and vocals which veered unsteadily from whispers to hysterical screams. In short, it was the kind of record I'd normal have been banging on about for ages. This is the first recorded output from There Will Be Fireworks since 2009, and reflects the journey so far towards their second album. The EP hints at perfectionism and slow, steady progress - there's nothing rushed or unfinished here - and while it's a close relative of that first blast of a record, there are subtle changes afoot.

The record opens with "Harmonium Song", which sets off with a steady rhythmic single note piano refrain and a gorgeous drone. The understated vocals provided by Nicky McManus are supported by little bursts of controlled guitar. It's an unrelentingly grim tale of loss and being lost, which builds to an ending drenched in mournful Joy Division synth sounds which finally fall away leaving just that nagging, stark piano motif. Next, "This Feels Like" builds around simple acoustic guitars and a sinuous bassline. With vocals further up in the mix, the lyrics merit closer attention - densely packed couplets and neat observations which set this apart from almost all of the band's obvious comparators. But the images of passing time and vague regret are never far from the theme, with lines like "the message reads like your first school bible/meaningless, dull" hinting at off-screen sorrow. Vocal dynamics are at the heart of the equally simple "From '84" too, with lupine howls and yelps of frustration. This is pretty much as close as There Will Be Fireworks get to a straightforward love song - but through their dark lens it's all frustration and unrealised opportunity. Finally "In Excelsis Deo" is a Christmas song by all accounts, serving to illustrate just how out of touch this blog is! It couples the introspective, acoustic themes of the rest of the EP with an increased tempo and a choir of backing voices. Lyrically it's hardly "Frosty The Snowman" - with casual, dark observations like "I'm drunk and hearing voices in carparks" reminding that Christmas isn't just full of happy excess. The increasing tempo builds to a sudden flourish of strings and a tumultuous crash of guitars which the band have resisted until the very end of the EP. Ususally, I'm no lover of festive novelty songs which can only be dusted off once each year, but this is quite different - and it will get filed away in the library for future use alongside Withered Hand's superb 2011 effort.

There's a strange sense of being teased by this EP, with the explosions and dynamics reserved for the very last seconds - but that's perhaps no bad thing. The triumph of the first album was in it's dynamics and epic shifts of tone and mood, and perhaps this EP serves to prepare the ground for more of the same on album two, bringing the quality songwriting and intense lyrical observations to the forefront. The message seems to be that There Will Be Fireworks aren't just another quiet/loud/quiet post-post rock outfit - this is something a bit different and a bit special. It's a bit late for Christmas, but it's not too late to enjoy this slow-burning gem of a record.

The four track "Because, Because" EP can be purchased from Bandcamp or iTunes.

So Many Animal Calls - Traps 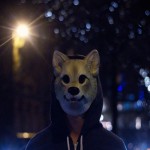 Despite setting out to write about rare examples of the traditional single format in these posts, I find myself straying towards the far more common EP these days, and in the process breaking all of my own rules. I can understand this, and given the relative ease of digital releases it makes abject sense for bands to get as much representative output available as possible. But the single still has a place - the chance to make an announcement, signal a change or just get a couple of songs out there which are too good to hold back. I suspect that final case is the drive here, and it's encouraging to find I finally have some real, old-fashioned singles to consider, including "Traps" by So Many Animal Calls. This band sit in a category of acts which I read about much more than I've actually heard so far, despite being a very well regarded EP into their career. There's always the nagging worry in those cases that the story is more interesting than the music, but it's hugely pleasing when the reverse is true and you realise that the hype is well worth believing.

Lead song "Traps" is a strange collision of the precision, turning-on-a-dime dynamics of post-hardcore and a gorgeously melodic brand of abrasive, intelligent pop which seems deeply unfashionable these days. It's an unlikely mix perhaps, but somehow, fused together they produced a proper old fashioned pop single with strident choruses and blasts of harmonic guitar. It's the kind of thing which has lured me back from my more obscure musical wanderings for years, and which has more often been the preserve of bands across the pond. But Glasgow's So Many Animal Calls seem to have nailed this genre by pure musicianship and hard work, making the band's self-coined 'failpop' tag completely inappropriate. There's nothing slack here - Sean McKenna's vocals are clear and pure, with a seemingly infinite range and a genuine melancholic ache bursting to escape. The whole complicated structure is supported by a superbly tight rhythm section including Ross Coll's liquid bass. As the parts tumble into place, and the song builds through chorus after naggingly memorable chorus, I find myself grinning like an idiot and feeling like reliving my distant youth. Flip side "The Best Way To Be Broken" is a different prospect entirely, but no less well crafted. Kicking off like a soft-rock piano ballad it drips regret and experience far beyond the years of it's ridiculously young creators. A couple of verses in and the solo piano is joined by swooning bass, military drums and chiming guitars which finally explode abrasively into life. It's like the theme tune from Cheers undergoing a genetic mutation before your ears, and once again it's very, very good.

So Many Animal Calls ability to manage the dynamics of a song is remarkable - particularly in the sense that they're not afraid to leave space and silence between their explosions and epic choruses, and they never seem tempted to go for the overblown or overwrought. I can't help but feel this is an early step on a potentially very exciting journey.

"Traps" will be released on 13th February by Overlook Records.