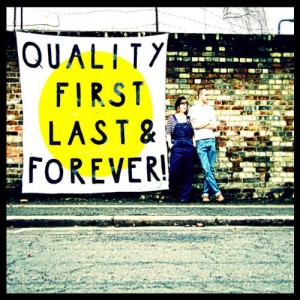 Folk music. Love it or otherwise, it's everywhere lately. With even the biggest acts keen to break out the banjo and brush up their authenticity by referencing traditional music of various strains, it would be easy to get cynical about the way it's become so marketable in recent times. However, there are beacons of genuine commitment and inventiveness still, and Trevor Moss and Hannah-Lou shine out in dark times on this uplifting and inspiring album. I've said before that it's been a strange year for me and Trevor Moss and Hannah-Lou, with frequent crossings of path. Starting with their "Tin Tabernacle" tour and ending up at Homegame, I've listened to many of these songs developing and changing in a variety of live environments. So, their inclusion here, often with little more embellishment than they received in their live, acoustic setting feels like a chapter completed.

"Spin Me A Rhyme" was always a playful, rousing call to arms even when it was just Trevor and Hannah-Lou and their guitars. Here it is transformed into a stomping, pop gem with big drums and a beautifully brassy ending. While this opens proceedings with the clear message that this isn't going to be another attempt at dour traditionalism, there are clear links back to the canon of protest songs with Spanish Civil War era references to "joining the brigades". The politics are rarely overt in Trevor Moss and Hannah-Lou's work - but there is a thread of communalism and a sense of pride in being British which seems terribly unfashionable now, even in these post-Big Society times. On the frenzied "Making It Count" this full band sound returns, with all kinds of joyous clattering percussion, bayou accordion and a lyrical tale of runaways which brings Brotherhood of Man's "Angelo" right up to date. It's audacious, ridiculously enthusiastic and impossible not to dance around the room to. A raucous folk-pop storm delivered with glee.

A spellbinding feature of recent live sets and captured perfectly here, "A Hill Far Away" is just two voices, two picked guitars and a slinky cello line winding around them. The voices entwine beautifully on lyrics which return things to a more prosaic everyday level, wistfully asking "have you ever had a day/when you wish the time would just slip away?". It's a quiet plea amongst the stomping celebrations and spirited clarion calls elsewhere on this album. One of the more positive forces at work in modern folk music is a willingness to blur tradition in order to convey a message, and "Big Water" exemplifies this perfectly. The landscape of picked guitars feels expansive and owes plenty to Americana, but here it meets some very traditional English balladry. This is beautifully played and touchingly sung, the traditional instrumentation supported by respectfully distant drums and organ. Over the course of their two records to date, it's clear that Trevor Moss and Hannah-Lou's songs are often connected to our times - with a focus on the late 20th and 21st century which is perhaps a little unfashionable in this kind of fayre? Bringing things right up to 2011, "Stargazer's Gutter" is a thoughtful take on the widening effects of the economic downturn, with a dramatic chorus urging Presidents and paupers to "come lie down next to me" in Wilde's universal gutter. Bankers and lawyers take a not undeserved swipe here, but ultimately the democracy of the gutter is preserved. We're all in it together it seems, and if this is the soundtrack then perhaps it really is going to be OK?

And as if to soothingly confirm this, it's time for "Feel At Ease". An eerily echoing introduction gives way to an understated guitar introduction, but then Trevor and Hannah-Lou's voices soar in, and the catalogue of painful everyday experiences racks up. But this is all about shoring fragments up against those ruins, rather than wallowing in self pity - and I'll confess that the part of this song which implores "when your blood and your sweat go unsung, hold your tongue" has had some personal application this past week! Coupled with hammond organ flourishes and a wonderfully retro guitar solo grafted from a Johnny Cash record, the truly transporting chorus anchors this as a personal favourite.

Whether they're being performed near a blustery Fife harbour, or in a tiny tin church these songs have a strong universal appeal - the sometimes sparse delivery provokes a sense of the familiar, but this record is packed with new ideas. It's also exploding with enthusiasm, defiance and a peculiarly English sense of workmanship. The roots of this album spread deep into a variety of traditions, but the curious blend of the personal, the political and an unashamed urge to write genuinely democratic popular songs make this much more accessible than any academic collection of traditional songs. Bursting with joy, tenderness, righteous indignation and ridiculously great tunes - what more could you ask for?

You can purchase "Quality First Last & Forever" from iTunes, Amazon or of course your local independent record retailer.