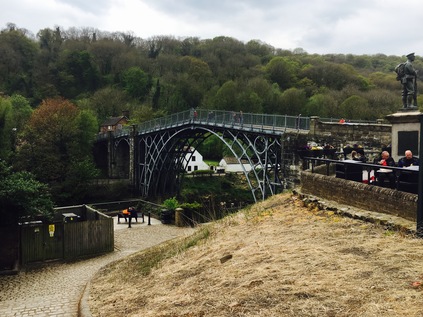 An Easter Escape to the Midlands

Bank Holidays are rarely my favourite times of year - and despite the extended Easter break being far more pleasant than I've often found it, I was eager to get moving. We set out, perhaps a little earlier than planned, heading for the Midlands via the M5. Traffic wasn't heavy and the weather had stayed remarkably good since the weekend. We were on the road again at last...

Our first target was Ironbridge. This was a late addition to the agenda, having debated whether we could squeeze another night away into our itinerary. I'd remembered this area as I scrolled aimlessly around the map looking for opportunities in Wales, and particularly recalled how aside from a railtour to the gates of the power station, it had been very tricky for me to get to this part of the world. Now of course, it was relatively easy, and we found ourselves in the village overlooking Abraham Darby III's bridge - the first such metal structure in the world. Its graceful curve to a summit in the middle of the deck emphasised the deep gorge in which the Severn runs here - already a wide and deep river. On the northern shore, the village gathers about the entrance to the bridge with the Tontine Hotel dominating the view as homes and churches step back up the steep green slopes. We walked south, over the bridge and by the Toll House to find the old Ironbridge and Broseley GWR station on the line which south of here has reopened as the Severn Valley Railway. 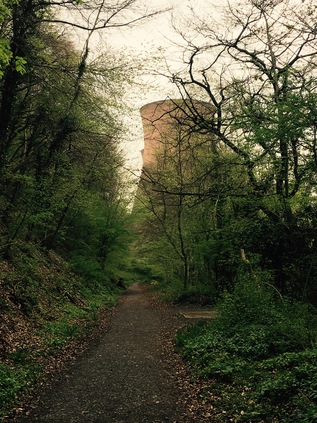 After a swift lunch and relocating the car to a longer-stay carpark south of the bridge, we followed the former railway line west along the gorge and into woodland. The path was quiet and the walk was a bonus since I'd been feeling cramped and restless since my last trek. As the path swung a little to the south to follow the broadening of the gorge, the terracotta red cooling towers of Ironbridge B Power Station were suddenly above us, dominating the view. The insistence on this unusual pigmented concrete in the construction is one of the impressively precise steps taken to ensure that the more modern of the two stations on the site fitted into its surrondings. The towers can barely be seen from Ironbridge, appearing slowly and ominously as the view west unravels, the gorge turning slightly south towards Buildwas. We walked to the fence where dire warnings were present about demolition - and while I'm sure the locals don't particularly value a decommissioned power station as a neighbour, I hope that these iconic and innovative towers will remain.

We set off to find our accommodation for the evening - a fine old Ironmaster's house in Jackfield, a little east along the gorge. It was undeniably a fine place, well-run and beautifully furnished with items which reflected its age and origins. However, beds were not made for larger and taller men it seems, and I found myself relegated to the hard, wooden floor of the room for the night. It wasn't a comfortable experience - and sleep was elusive it's fair to say. A little recompense was made in the form of a very, very good breakfast with generous amounts of black pudding. I was ready for the next leg of our trip. This time we headed south, via Broseley and towards Kidderminster. Passing into Worcestershire I felt a little pang of pride mixed with regret. It had been a difficult week for me remembering my mother - and somehow being here in our family's home county felt like a little pilgrimage. We paused briefly in Kidderminster to watch a steam-hauled train departing on the Severn Valley Line, before exploring the fine station a little. 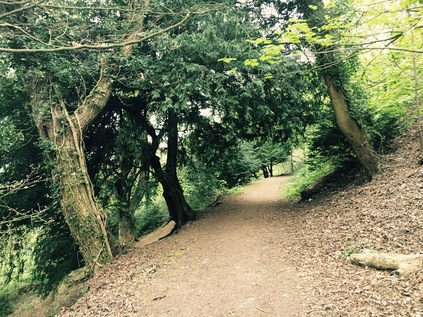 Arriving at our hotel in Great Malvern was, as previously, a pleasure - and we were soon enjoying the splendid views across Worcestershire from our room. This had been our original target - a night in the same spot we'd stayed last February. With even better weather, the views across the Vale of Evesham were longer, and the hazy evening sunshine allowed us to sit outside the hotel playing boardgames before heading indoors for dinner. The newly refurbished dining room was beautiful and the food was as ever fantastic. This felt like a real escape - and a welcome chance to reflect on my response to anniversaries. I was actually relaxing for the first time in a while. After a much better sleep, I rose early and headed onto the paths behind the hotel which lead onto the hills. I didn't walk far - it was chilly and I needed far more coffee before attempting an epic hike - but the bracing zig zag above the buildings below was surprisingly rewarding. I headed south to a break in the woodlands and found superb vistas to the north and east while standing surrounded by bluebells. This isn't bad country to call ones' own!

So we headed back, via a break in Worcester and a quick spin back along the motorway. It has been good to have a longer break - and refreshing to get away midweek. The restorative power of the Malverns was, once again, not lost on me.

A few more pictures from the trip are here.