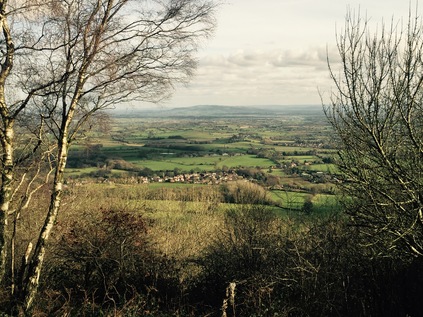 Taking the Waters: Back to the home county

I woke early this morning, despite trying not to. It's become my custom on our more urban breaks to use the golden morning hours wandering deserted city streets or staking out turgid waterways while my wife prefers to sleep in. We're agreed that each other's chosen way of spending those hours between the time that fools and decent-minded people rise isn't for us - another way in which we complement each other it seems. In fact, I'd worried a little that being out here in the countryside, out of easy range of civilisation would leave me pacing the room in frustration at the waste of these quiet early moments. Once I'd accustomed myself to being away from home I remembered the rather splendid location we were in, and padded over to the patio doors at the end of our huge room. We'd gone to bed on a wet, dark February evening with the lights of Worcestershire twinkling happily in the rain - but I woke to a wonderful vista - the Severn valley fell away from the Malvern Hills, a vast pool of mist capped by the distant, purple smudge of the Cotswolds. A patchwork of green and yellow could just be discerned through the cloud, and above it all a weak but persistent winter sun was rising. It was a beautiful scene, and I quickly dressed and slipped out onto the little balcony with a fairly horrible coffee for company. 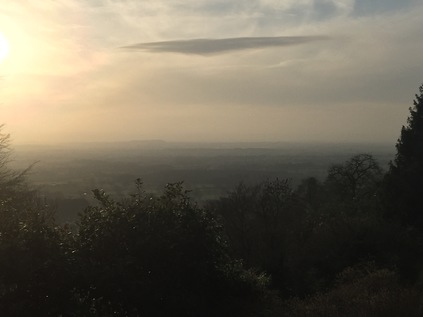 Morning in the Malverns

I'd intended to read, or to write - but for the first time in a very long time I felt content to do virtually nothing but look. I watched the sun rise, the first time this year that I'd really felt it's warmth, and start to burn off the mist. I watched the first, intrepid birds braving the chill and diving for worms in the dewy grass. Slowly people began to stir and wander towards the breakfast at the main hotel building in pairs, holding hands. It was Valentines' Day and we were part of a band of people getting away for the weekend. For me though it was an anniversary - three years ago I was preparing to head for Seattle - a nervous, painful time of fear and uncertainty which seemed a world away here. Particularly here, because this place - these hills specifically - had fascinated me from an early age. From my school playground I could see across the flat plains of Northern Worcestershire towards the Malverns. They were a dark, ominous presence on the horizon, and I remember a game I instigated where we were tribesmen bowing down to the hills. I really don't know where I got the idea, probably some comic or history book - but little did I know how I'd be venerating the topography all those years later. I had relatives who lived on the other side of the hills, and travelling to see them was a delight - would we skirt the hills on the dull, flat road or take the exciting Wyche Cutting with it's switchbacks and hairpins, and it's curious amusement arcades and attractions lining parts of the route? I remembered too a journey with my father, when I insisted on dragging along a Tonka tipper lorry. I recall we walked up a dry, scree-covered slope and he paused to let me repeatedly fill the truck, run it a way along the track and dump it's contents. It felt like a rare moment of calm in my dad's life - a time when he wasn't rushing to work or snoozing over his dinner.

Worcestershire, from the Malverns

Later, we walked into the hills together from the southern edge at British Camp. The track runs along the ridge, rising gently at first then undulating as it climbs. From the first peak, the views were sublime. The sun had stayed high and surprisingly strong, and up here the wind was blustery and refreshing. I asked if we should turn back, but I was assured we could go a little further. Finally the views opened on both sides: to the west, the shadows of Welsh mountains adumbrated the rolling country of Herefordshire, and to the east Worcestershire's typically English blanket of farmland rolled towards the Severn and the Avon. We stayed up there for a while, letting the wind whip our hair in our faces and thinking about the journey we'd both been on to get here. I realised too, as I looked out over my home county that I missed my father terribly - more than perhaps I ever expected. I missed both of my parents more in fact than I'd dared to admit to myself over the past year. But I wasn't alone up here - and that is perhaps the most surprising thing of all.