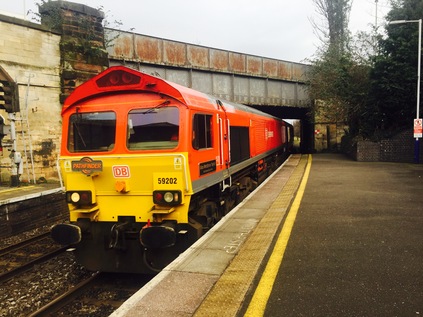 In some ways it felt strangely familiar to be heading out at the crack of dawn, on the very first possible train of the day in pursuit of new track, joining the surly nightworkers and early airport crowd. But in many ways it was far from it - deposited at the station via a warm car ride, and knowing I'd be picked up at the end of my day was quite a new experience. So too was doing this directly from home, rather than from a bolt-hole somewhere else in the country - a hotel room in Crewe or Birmingham seemed to be almost home for a good few years of my life. It was though, surprising how quickly the sense of excitement and contentment of a day on the rails returned. I think I'd almost worried I'd lost the thread of this hobby somewhere - but with the sun just rising as I was deposited in Bristol it promised to be an interesting day. I settled into my familiar seat on the Cheltenham-bound 1M21 like I'd never been away.

Arrival at Cheltenham was absurdly early. I'd not quite believed the timings when they were tentatively announced and then withdrawn, so I'd gone for an excellent cheap fare on my old stalwart services. This meant a pleasant linger over coffee and breakfast in the station buffet, watching the world go by. I've missed this a lot I think, and in some ways I replace it with my local coffee shop jaunts or time in London, but there's nothing like watching people going somewhere - some are agitated by running to a schedule other than their own, some are excited - a first trip for a young, wide-eyed youngster on a train perhaps. Some are clearly upset, bewildered or just beaten down - and there are a fair few intriguingly mysterious types too. Perhaps I read too much into the faces of people impatiently waiting for watery lattes in Cheltenham? Perhaps though that's one of the things which has always fascinated me about travel - who are these people, and why are they out here doing this today? As I started to get myself organised for the trip - copied Quail pages, Baker atlas to hand etc. - I realised there was a really excellent independent coffee shop a stones' throw from the station. Next visit, I reassured myself, and headed out to the platform.

It's equally interesting how similar the platform felt as we waited for the tour to arrive. Bewildered normals wondered why all these odd, excitable folks had suddenly appeared, tripods were assembled at the platform end. At the north end, where messages had told me our coach would be, there was a more subdued and discerning crowd. They all seemed to know each other - and I felt out-of-the-loop. Of course this is because I was boarding at a station I used very little. If I'd appeared at Crewe or New Street, I'd probably have ended up in a spirited conversation with someone who didn't realise I'd been away from the rails for three years or more and just assumed it had been a while since we'd crossed paths. But just now I felt a little pang of panic. How would today pan out? Before I could get too deep into that concern, the familiar whisper of anticipation passed around the platform. In the distance, a red speck shimmered on the horizon. 59202 was approaching with the tour almost exactly on time. It's like I'd never been away after all.

It was great to catch up with the folks on board - people who I'd spent countless hours with over the years in all kinds of places - sometimes interesting, sometimes hilarious, sometimes whiling away boring scoots back to Crewe or Doncaster in the dark after a day out. Things hadn't changed much - and we were soon discussing the day, the railway scene and catching up on events pretty effortlessly. The tour had extremely lazy timings, and aside from some interesting shenanigans switching lines around the curve at Westerleigh, all went smoothly and I was soon back at Temple Meads. A break here to attach 59001 to the front meant a chance to grab coffee, take a picture and to enjoy the atmosphere of the station with a 'proper' train for a change. We were soon back on board, and heading towards Bath in gloomy and damp conditions. Taking the curve to Westbury and negotiating the through line behind the station, we slewed across an unfamiliar connecting line to head for Frome. I was really only a few miles from home at this point, but I felt like I'd travelled more today than for a long while. Our first call was at Whatley Quarry - new track for me - and after a surprisingly swift run up into the Mendips we soon came to a halt outside the sheds. The Pathfinder publicity machine had - as usual - ground to a halt now, and there was no announcement about what was happening at all. A slow trickle of vestibule-huggers passed through the carriage, and soon we were moving slowly back towards the mainline. Apparently at this point we were being propelled by the resident shunter - but we'd never have known! After a brief halt to detach our additional power, we headed back to Frome, reversing again and heading south through the town's rather quaint wooden train shed on route to East Somerset Junction. From here, it was a slow, wet crawl towards Merehead Quarry. I'd been here before - or at least close by, and we set out by following the same curve towards Cranmore before coming to rest in the long siding beside the through line. Again, no announcement but we were soon reversing between rakes of wagons on the northern edge of the triangle. Apparently, this road was obstructed, so we retraced our steps forwards into the siding, then back around the western side of the triangle. Here, back at the entrance to the complex we forked right and crept around the eastern curve a short way towards the A371 bridge which was our destination. But we didn't quite make it. In fact those at the rear of the train would barely be past the junction. As we sat waiting for a water tender to tank the coaches, an announcement was made about what we'd done and what mysterious engines were on the shed we couldn't see! I shouldn't be surprised - it is perhaps always like this on these trips, but it was a little deflating to sit in the rain for forty minutes when we knew there was track we hadn't done.

The return trip to Bristol was a chance to relax and chat with the folks from up north who I don't get to see too often, a chance to share a few bottles of beer and to speculate on when we might all be out on the same trip again. It had been a fine day out despite the challenges and disappointments - which are of course, all part of the hobby I remembered. Leaving the train at Bristol was tough, the urge to plough on into the night and up the Lickey Incline was strong - but for the first time ever I had a reason to be heading home after a trip. Some things have stayed the same these past few years, but some are very, very different!