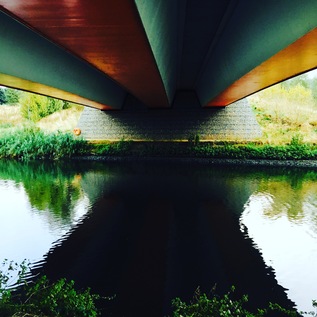 Growing up in the relatively rural westcountry, there have been few enough occasions where I could open an entry here with a Ballardian broadside. But today I woke up on the tenth floor of the Premier Inn which towers over Westfield. From the narrow window in my eyeline as I oriented myself to where I'd awoken, I could see the truncated bowl of the London Stadium surrounded by precariously slender, nascent towers with cranes still embedded in their steel and concrete cores. The sun was slowly rising behind the hotel, casting a strange shadowy light over the dusty building site which marked the boundary between the mall and the Olympic Park. Moving to the window, I took in the panorama to the west - sweeping from the copper flashes of autumn sun on the glass of Canary Wharf to the purple bruise of high ground in the distant north. In the midst of this, the green waters of the River Lea and its tributaries appeared oddly luminous in the morning light. Last night, as I'd dozed after too much good food at Lance Forman's place on Fish Island, the lights on the stadium had malfunctioned. The claret and blue neon winked out WEST Â Â Â  UNITED. As their first official day of playing at the stadium came to a close, ham, it seems, was off. I dressed swiftly, heading down to the ground floor and into the chilly October morning. I had no plan as such, and no real goal in mind. It was enough to be out here on this much raked-over ground so early. I skirted the car park and the concrete trough bringing trains to the International Station, and found myself walking the ghost of Waterden Road. This empty street, wheeling in from the midst of the retail complex wasn't the road I first knew - but it covered the same ground. 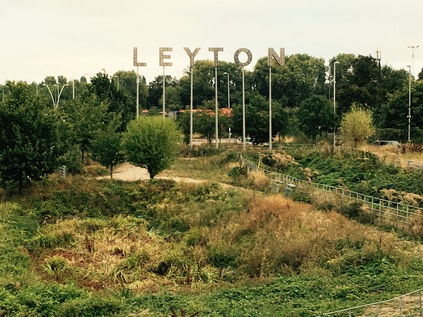 LEYTON above the Dagenham Brook

At the river crossing, I headed down onto the silent towpath by way of a steep staircase and passed under the road. The emerald waters rippled as birds took flight on my passing, and the reeds swayed in the ebb of the stream. As the sun began to climb, forcing through a dull morning mist, the scene began to take on colour - the swaying grey mass atop the bank revealed itself as a sward of yellowing marsh grass. The summer's growth almost concealed the Olympic Rings, glowering over the area and staking their claim. I walked on, the yellow stone surface of the path making for a pleasant crunch to my step. But I noticed this coating which had made the park an appealing swirl of colour from above was looking threadbare. The underlying asphalt was exposed in places, the true industrial nature of the area returning to the surface maybe? Passing under the bridges carrying the tracks from the Lea Valley Velopark, I was aware of the approaching drone of the A12, with the swishing grass no longer managing to mask the sound. I took the path up to Eastway, emerging on a familiar corner. Across the street, Homerton Road led into the Wick Woodlands - and eventually to a what had become significant walk for me alongside the Old River Lea. Overhead a fading 'get in lane' sign for the IBC/MPC was partially whitewashed out. This junction had felt so impenetrable and inhumanly teeming with traffic on my last visit, but now it was eerily quiet. I turned east with the vague intention forming of taking a circuit back to Stratford via Leyton.

The early mist began to rise as I trekked along Ruckholt Road, remembering the desperately hot summer excursion I made along here during the Games. Today it was almost silent - with New Spitalfields Market closed for the weekend and traffic surprisingly quiet, I ambled along interrupted only by the occasional bus setting off from the nearby depot for the day. At the abandoned gates to Eton Manor I saw a temporary roadway slowly succumbing to nature behind the fence. The football pitches had been restored, and the lanes for guiding traffic into temporary parking slots were redundant, their patchwork of temporary paving cracking and dissipating. As I climbed towards the bridge which had nearly defeated me in the heat of Summer 2012 I took the opportunity to look north and east - it had been an unknown world then, beyond this edge of the park - but now I had a tolerably good idea of what lay beyond. Beneath me, the Dagenham Brook edged around Orient Way - Leyton's only partially ironic version of the 'Hollywood' sign on poles protruding from the greenery. There was a walk in this - linking the Olympic east with the edgelands I'd walked in more recent times, but for today it was time to turn south. I headed into suburban Leyton which began abruptly after the rail depot at Temple Mills. Suddenly I was in an avenue of victorian terraces, with only a corner site being redeveloped as luxury apartments to give away the proximity to the new megacity at Stratford. Soon, even the tallest of the towers around Westfield had slipped below the roofline and I was surrounded by a calm Sunday morning of aromas - breakfast cooked, washing steamed, dinners roasted. Ahead, the High Road was coming to life with a gentle whirr of traffic. Pedestrians lazily dragged suitcases up the rise over the A12 in its concrete gully towards the tube station - and I remembered gratefully sliding onto a cool trackside bench, dry-mouthed and with a racing pulse at the end of my previous walk. By my current standards it was a fairly short tramp that August day, but it came with the added jeopardy of being stalked by paranoia courtesy of LOCOG. Today the progress along the High Road beside the dew damp grass of Drapers Field was more leisurely. I passed tiny cafÃ©s peddling giant breakfast plates and my thoughts turned to coffee... 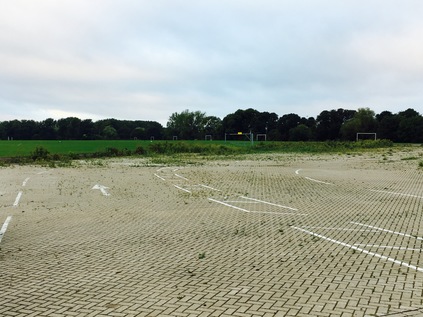 Over the railway lines I could see our hotel in the cluster of towers - it seemed I'd come no distance at all, circuiting the manufactured centre of Westfield. The road dog-legged crazily towards Stratford, rising over the railway near an old pub - still here despite being surrounded by nascent towers and concrete retaining walls. Below us, somewhere, the dead culvert of the Channelsea River ran dry and the old Angel Lane of pubs, schools and shops was similarly absent. Ahead of me Joan Littlewood's theatre seemed a gaudy scarlet against the beige of the old Stratford Centre. Nothing could be expected to bring this resolutely 1960s conception up to date - its winding service roads and jagged edges hinted at a time gone by and contrasted jarringly with the smooth curves and shiny surfaces of Westfield. Inside, the centre was deserted with few of its stores open until later in the morning. A few locals used it to shortcut to the station, skirting the market traders wheeling in ludicrously overloaded barrows. Even they couldn't quite figure the place out - artisanal bread duelling for space with poundshop 'phone cases. I soon burst out into a surprisingly sunny morning on the High Street - traffic hummed, people bustled, little had changed. I settled into the window seat of a coffee shop before venturing into Westfield to complete my circuit. I'd woken up with the city today, and was finally ready to face it.