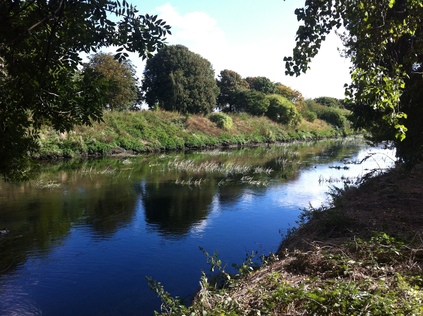 Not Afraid of the Dark: The Old River Lea

There is a fairly certain sense to my London wanderings, built around a particular set of trains and a surprisingly uniform pattern of travel. I haven't, in the main, set out to do this consciously - more it's a mixture of necessity, comfort and the repeated urge to walk certain paths. In part this has been down to a sense of impending change to the structure of the area or the looming denial of access necessitated by the Olympics. However, today was different on many footings. Firstly, I was arriving from Marylebone having spent the previous evening at the London Palladium seeing bands. This in itself was a strange take on London, with me having to negotiate the less than loved West End. Secondly I was very conscious that my mind was elsewhere today - an ocean away in fact - and that my focus was dominated in a far from unwelcome way by influences elsewhere. Oddly though, this dazed and planless situation led me to familiar territory - and after a winding and surprisingly warm sun-drenched journey atop a No. 30 to Hackney Wick, I found myself touching down on Eastway - resuming the lost threads of earlier walks which seemed to unravel in the incomplete traffic interchange.

This meant initially managing the mess of pedestrian facilities at the end of Ruckholt Road once again. I dashed across, uneasily eying a pile of memorial flowers in the circumstances, before discovering that the route I'd picked my way along before was stopped up - a barrier pointlessly cable-tied across the path with no obvious purpose. I had to turn back and make an increasingly fraught set of dashes across roads of uncertain priority. The last one took me uncomfortably close to the decaying flowers, but suddenly and unexpectedly I came upon the continuation of Homerton Road, and beside it the slope down to the course of the Old River Lea. The history of the river in this area is complex - with channels being opened and dammed, made navigable then abandoned. But this ancient course persists despite falling on hard times more than once in the last millennium - a sluggish, curling, snake-like presence which defines the eastern edge of the vast and dizzying space of Hackney Marsh for much of its length. Once on the official path I quickly realised that the river was hugged by an unofficial path which ran close to its western bank. This well-worn trail was almost silent, occasionally frequented by dog-walkers roaming off plan, or by fishermen - but usually oddly silent beyond a screen of trees which eventually became a thick tangle of woodland. I set off, dodging the odd encampment of blue bags and burnt logs which indicated recent, if provisional, occupation. It was quiet and cool at the waters edge and I found my way to a quiet spot near a stopped-off bridge bearing the ODA's "Changes" notice which now looked forlorn, damaged and inconsequential. However, the changes it wrought were still real enough, as at the end of the bridge was East Marsh. Now the Eton Manor Transport Hub - a temporary facility now being inelegantly removed and restored against all good advice. Still this process confounds and destroys, even after the last javelin has been thrown.

I wait at the bridge, take pictures and with a desperation and enthusiasm which catches my still bleary-eyed self off-guard, read the latest transatlantic tract. Cheered beyond reason, I move on - the river cast in a new light as a channel of hopeful emerald, swinging to the west and skirting common land - Lammas Land no less. Ancient and open by statute, but today occupied by a loud, howling tannoy as part of the Countryside Live event. I can't imagine any speck of wildlife for miles around tolerating the keening noise of feedback and banal chatter, and I follow the path towards the confluence with the Lee Navigation which completes the circuit for me. At the junction, a grassy path leads away under the range of electricity pylons which dominate the scene, towards the familiar exposed innards of the abandoned power station - a brooding presence. I stop for wide-angle skyline shots to indulge my obsession with the changing and shifting London boundary here. To the south, the Arcelor Mittal Orbit and the upturned skeleton of the Olympic Statdium, to the west is Canary Wharf, the sinister pyramid atop One Canada Square dominant, and to the north, the ruins of the power station. Between them, the barcode facade of the flats on the Lesney Site and the inelegant high-rise planning gain of Stratford City. But separating them from me, a sea of marshland and bent municipal football goals. The sea image is strong, distance acutely observed. It's time to move on... 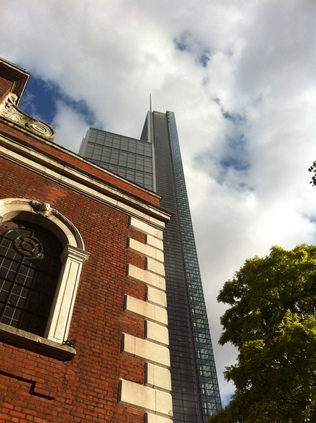 Heron Tower and St.Botolph's
I take an uncharted path which promises access to the Waterworks Nature Reserve. However this seems to be tucked inside another fence which runs parallel, a ghost of the path on the other side of the fence. None of the gates are open, but the route turns into a long straight dipping valley. This is the point where the Waterworks River heads underground - it's gummed up, filth strewn junction with the Lea a little way back. I take the path which climbs to Lea Bridge, walking slowly behind a group of Polish mothers and children. The kids play creatively with found items, while the mums on one of their rare outings are glammed-up absurdly for a walk on the river. I realise how hungry and thirsty I've become and hop onto a No. 48 back towards Liverpool Street. I especially enjoy it's slow crawl through Clapton and Hackney Central. I'm seeing the city through strangers eyes now, observing details to report back in near-obsessive fashion. At times like this I delight in the complexity and darkness of London, drawing light from outside. But it's a strange contrast being out of the green-tinged tunnel of trees on the edge of the water. I soon find myself in the churchyard of St.Botolphs, a little of the day's sunlight still lingering and bouncing off the unrelenting glass facade of the Heron Tower. I take a snap of the skyline with the intention of comparing it with one thousands of miles away from here. The light flares from the windows of the inelegant building as the sun edges down behind the aspirationally incomplete skyscrapers of the city. But I can honestly say, I'm not afraid of the dark.