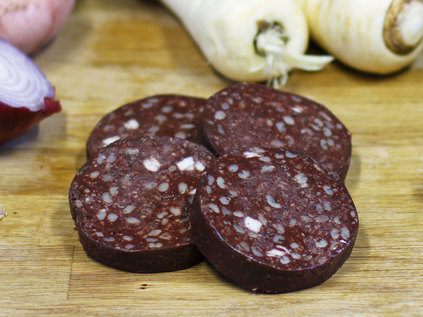 Breakfast is by far my favourite meal. There are a number of reasons for this: firstly, it's usually accompanied by copious amounts of coffee. I love coffee. Don't misread this as "Mike likes coffee" - I appreciate it's subtleties and variations, I love the flavour and the ritual of making it, and I drink a ridiculous amount of it. I really like it a lot. Secondly, I'm an early riser - and by the time breakfast comes around, I'm really hungry. So, I don't suffer from the "hmm, I just woke up and I can't face food" thing which many people do. At breakfast time, I'm ready to eat! Finally, and rather simply, breakfast gets all the best foods. While you're probably inserting your own favourite breakfast food here - maybe a glistening link of Cumberland Sausage, a gloriously sticky waffle, a flaky croissant, a crisp edged sliver of back bacon or even a fluffy golden pancake - there's one food that I grew to love and which I feel the need to speak up for - and that is Black Pudding.

I grew up in a Midlands household where three generations of the family were living close together. My great-grandparents had come from farming stock and were certainly not squeamish or sentimental about livestock. My grandparents had survived the hardships of the Second World War too, and didn't believe in wasting food. As a child, I was more than comfortable with the idea that kidneys, pigs feet or chitterlings were being cooked in the kitchen when I arrived home from school. Some of them even smelled pretty good - but I never really tried them. They were 'grown up food' which I imagined I'd discover one day in some greasy-fingered right of passage. Black pudding fell squarely into this category, and stayed there for many years.

Travel broadens the mind in many ways, but for me one of the things it opened up was the joy of breakfast away from home. Perhaps in some lurid, plastic-tableclothed B&B or better yet on a train scudding north - it's hard to beat the travel breakfast. It's here I found myself experimenting with Orange Marmalade for the first time - something we rarely found at home - and it's here too I first tentatively tried black pudding. By turns smoothly unctuous and rather grainy in texture, the rich pork flavours lured me in. It was like the most bacon tasting bacon ever, essence of fried pig. In short, I was hooked. A lot of my travels took me to points north, and I found it easily enough. I remember strolling through Bury Market and seeing a stall entirely devoted to it. It even formed the basis, along with haggis, of one of the best hangover cures I've ever had one fuzzy-headed morning in Anstruther. Suddenly TV chefs were using it too - sliding it under seared scallops as a sort of middle class middle finger to 'poor food'. I could have found some woolly-headed Liberal offence to take here, but I was happy. More black pudding is a good, good thing.

But it's not always that simple. Black pudding has a pretty poor reputation in many quarters - which might be down to that complex class-related issue, or might just be because people don't enjoy the thought of fried pig's blood? Certainly, living as part of a joint UK/US household I've had my own acceptance challenged of what we delicately call 'offal', but what across the pond is known plainly and anti-euphemistically as 'organ meat'. But my position remains that if people taste the stuff, they'll at least decide on rational grounds - and sure enough, this household now has TWO pudding eaters! However, this ambivalence to the stuff causes some very strange things to happen. Firstly, its sudden vogue means it can be found on the menu everywhere - but the generally lack of enthusiasm means it's equally often the first thing to become unavailable. I'll often find my lips smacking at the thought of a slice of glistening, dark savoury pudding only to be told the chef is out of it. Or more strangely still, it appears to be listed as a standard breakfast item but simply doesn't appear. Is the assumption that it's OK to leave the pudding off because people don't like it? Or is it something more sinister? I've noted this and pointed it out as we travel around the country - and I think at first it sounded like I was being over-dramatic or pudding-paranoid, but after yet another non-appearance today I think my conspiracy theory is gaining more general acceptance here. Today's excuse? They are changing the menu but hadn't updated the card yet. But of course because it was 'only the black pudding' it didn't matter at all.

I realise that this is an awfully long tirade about something very, very unimportant. The very definition of the first world problem perhaps. But there is something slightly serious hiding here. The whole North/South divide thing hasn't gone away at all - it lurks in these strange culinary, linguistic and class prejudices which are riven through British life. But please, breakfast chefs of Britain, don't deprive me of this wondrous food on the basis of an amateur semiotic analysis. It tastes good, it's traditionally British and it's pretty darn cheap.

Give me back my Black Pudding!