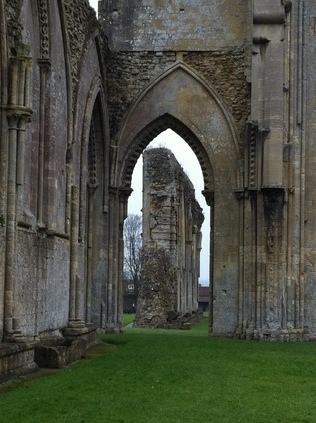 History Lives In The Cold Ground

With a long-planned trip to Scotland looming, continuing the revisiting of local landmarks seemed like a sensible plan for today. I'd also become curious about the growing network of local services provided by WebberBus. They seem to want to challenge the local monopoly in a fairly positive way - decent services, good vehicles - even, and this seems almost too good to be true - friendly drivers! Having used their service to get to Wells, we decided on a trip to Glastonbury via Bridgwater today. The services linked up nearly seamlessly at Bridgwater Bus Station - something of a relief as it was very, very cold. Winter seems to have developed a second wind after it's deep cold snap earlier in the year, and wrapping up warm we were grateful for the heating in the vehicle as it crested the Polden Hills near Puriton. Running along the causeway, the misty freezing morning provided truly wonderful views across the Somerset Levels. Our distant goal was evident from the Tor, occasionally emerging from the mist as we progressed towards the ancient town.

We emerged from the bus in the centre of town, where a farmer's market was ranged around the stone cross. We lingered awhile, finding good bread among other produce, sold by people keen to talk about their wares. The town was largely as I recalled on a school trip many years ago - even some of the more established esoteric outlets for crystals and aromatherapy oils remained. In a vegan cafe fronting a courtyard of these places, we relaxed with coffee and watched the inhabitants of the town walk by - a strange mingling of the commonplace with the truly unusual. Robed monk-like men, women with layers of knitwear and stars on their cheeks, all rubbing shoulders with seemingly unruffled white-van drivers and families. It was pleasant to watch the odd parade as we sipped coffee and deferred our return to the cold.

Eventually though, the Abbey called. Once through the modern visitor centre, and having marvelled at the tiny St. Dunstan's Chapel, we explored the grounds. It was bitterly cold, and getting colder as the day progressed and the little weak sun began to disappear. The ruins were nearly deserted and we had the opportunity to range wherever we wished, largely without interruption - though one young woman appeared to be performing yoga and summoning energy at the top of the site - the ancient span of once truly magnificent ruins before her. As we explored the simple, earthly truth of the site emerged - the ruins are here because a King wanted to divorce his wife. All the sublime beauty we'd seen at Wells a little while back could be here too, but for greed and lust.

After feeding some grateful and frozen ducks, we headed back into town. The Chalice Well could wait for another visit - food beckoned in the Lazy Gecko - a surprise find which turned out to be the perfect spot for warming, hearty fare. As we waited for the bus we talked a little about the two sides of Glastonbury - the haven for oddballs and mystics, and the deeply religious and serious history. Whatever you make of ley lines or other mystical connections, there is no doubt that something special surfaces here.