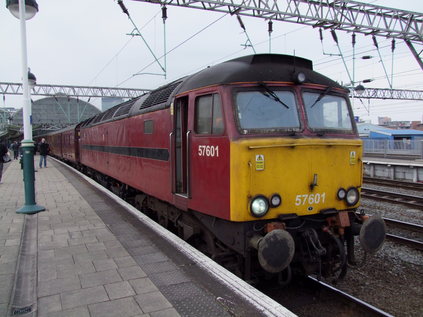 Despite its reputation as a rather gloomy, windswept locale, Holyhead has always been a special place in my railway geography. Early dashes along the coast with Class 37s, then later weekend escapes with a Class 47 hauling me back to Crewe. Yes, the locals changed over to Welsh TV when you ordered in the pubs, and the weather does swing from cold to positively baltic - but even so there is something special about getting to the end of the line, so to speak. On that basis this tour was always going to appeal to me - starting locally, a dash up to the North West to drop of the normals for shopping in Manchester or exploring in Chester, then along the coast for an hour at Holyhead. The novelty of being able to catch the first train from Highbridge to reach the start of a tour was today's initial excitement - would the train run, given that the railtour stock had been prevented from getting to Taunton by engineering? In fact, the timing was uncharacteristically impeccable and I found myself passing the tour stock at Bleadon, heading down to Highbridge loop to reverse - not more than a few feet from my front door in fact. Met some local folks - some rather unexpectedly - and chatted until the train arrived for our 06:42 getaway. Despite the presence once again of the dreaded "Green Knight" in the rake, most of the stock was pretty good. My coach was warm - rather warmer than I'd usually like - but it was a cool morning, and I could slip the window open a little. Settled in for the run up to Bristol and Worcester.

After rejoining the main line at Stoke Works, we took the Camp Hill route before passing through Birmingham New Street non-stop - not even a crew change here, unusually as we headed north to Soho for a detour around Bescot. Rejoining at Bushbury, we made good progress along the West Coast Main Line as far as Basford Hall Junction where we slowed to a crawl. As booked, the train swung left and began to skirt the western edge of the vast yard. A train full of enthusiasts craned their necks and leaned out of windows as we made a slow progress around the huge fan of sidings. At Sorting Sidings North we began to descend into the 'Muck Hole' to pass under the station area, the mournful rakes of Class 56s returned from duties overseas and now redundant above us at the Diesel Depot. Resurfacing on the Manchester lines, we had a rather stop-start run into the city for our first set down. The plan had been to use the 'ghost train' route to access Victoria, but a points problem at Heaton Norris had led to the junction being temporarily plain lined to keep services running until a repair could be effected. So, instead we ran into the main train shed at Piccadilly for a reversal. A loco hauled train is now a fairly unusual sight here, and we attracted a fair bit of attention!

With 57601 now leading, the run along the coast lost a little of it's glamour. It was becoming very hot and stuffy in my coach, but the older folks across the bay didn't appear to mind this at all - and when I opened the window wider they pointedly cupped their hands and blew into them, and put on their coats. I dozed along the rather dull slow run via Mouldsworth to Chester before deciding to get some air at a droplight for the run through Rhyl and Abergele. Remarkably, despite a gloomy start to the day down south, the sun appeared to be coming out on the coast. Despite the 37s being on the wrong end of the train for my liking, the run was superb. Seeing the landmarks along the run again, including the rusting hulk of the Duke of Lancaster moored alongside the line was fantastic - and I was reminded why I loved this trip so much. Scenic in the sense of some classic journeys it probably isn't - but then over the years runs like the Settle and Carlisle have lost some of their glamour for me too. However, this one never seems to tire - and as we curved under Conwy Castle, I noted a good few lenses poking out of the windows too! It was particularly good to see a new generation of enthusiasts discovering the line and the classic loco-hauled trip along it. However, this also meant them discovering the delights of Holyhead - and on arrival in really unprecedented sunshine, they scattered to the bridge for that special shot over the fan of sidings, now empty except for the stock of a UK Railtours excursion to the Welsh Highland Railway. Got some shots myself before wandering around the station to see what had changed in the past year or so. In answer, not much - the facilities remain concentrated on the ferry terminal with the tiny buffet now closed and a larger facility providing refreshments. The sweeping steel bridge directly into the town centre seems to be a blessing, and a steady trickle of passengers made the walk in order to secure provisions or seek out the few pubs still open and recommended. I elected to find a spot in the sunshine, get a decent coffee and watch the activity around the station before heading back to the train for the return run. 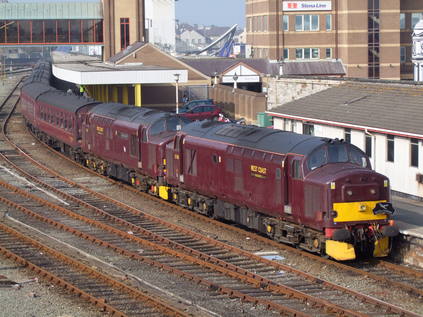 With the 37s leading, things were a little more exciting on the way back. Once up to speed and scudding across Holy Island, my neighbours once again asked for the window to be closed. This was frustrating as even from the back of the train, the noise the pair of engines up front was making was impressive. The afternoon remained bright and warm and with Summertime about to officially commence tonight, the daylight lingered fairly late meaning that we still had a little light as we left Chester and headed for Warrington. However, just as I was becoming impatient with the heat in the coach, the "Green Knight" saved me. As ever, the light and heat in there had failed, and with a full train Spitfire were doing their level best to relocate the passengers somewhere warm and bright. Sought out the organiser and offered my seat - initially thinking I'd end up with a whole bay in the "Green Knight" - not ideal, but without anyone else around possibly tolerable. Instead I was invited down into the staff BSK, where I found a comfortably warm but not sweltering bolt-hole in a fantastic old Mk I First Class compartment. Settled in for the run back via Manchester Victoria and derelict Denton, still open in this direction at least. Pleasant conversation and decent food too most of the way back which made the time pass incredibly quickly. All went well until we ground to a halt just after leaving Worcester. A points failure at Abbotswood Junction seemed to be taxing local Network Rail resources to the limit, and there we sat for some time. In my warm, dark compartment I was quiet happy to pass the time pondering things - what time would we get back, and would they have locked up Weston station by then? Just how would about 150 passengers climb over the fairly robust and rather fierce looking picket fence which now surrounds the station. Finally underway, and with a bit of a chase on the locos performed impeccably. We had to be out of Bristol around midnight, and with a possession closing the line behind us too it had all the hallmarks of a classic movie chase. After a spirited run south we made Bristol a little after midnight and made short work of the last leg to Weston. The delay wasn't ideal, but the resulting high speed run was entertaining. Another fantastic day out with Spitfire folks, with a classic route and fine traction.