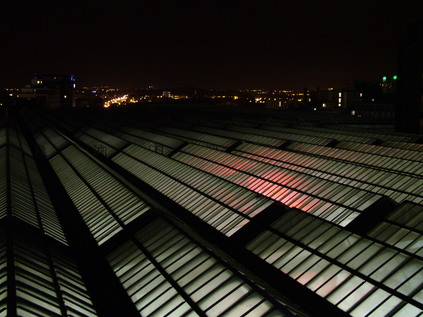 Never attempt to cover track in anger. Just like last time it seemed like the first day was going to fall apart - this time at the very first hurdle. My determination to cover the 'missing link' between Kilmarnock and Ayr - so short, but so annoyingly missed on the last rover - had persuaded me to make this the target for the first day of the trip. Met some of the Bridgwater gang on the way to the station, who filled me in on goings on at the WSR steam gala. A crowded but fairly straightforward trip to Temple Meads on the 07:54 - usually a train that takes me to work. Lots of time at Bristol to get coffee and a bite to eat, and to watch the goings on at the station - with 57303 passing through following seawall duties at Dawlish this weekend.

Noted the 09:17 Penzance delayed by a bridge strike. From my vantage point on platform 3, couldn't see if the train was in the station or not. Soon heard that my own train was also delayed, as the bridge strike was to the West of the station. Ten nailbiting minutes where the display just flashed 'Delayed'. Then noted the 09:17 moving slowly out of the platform towards the West. Things were moving, and soon enough so were we.

However, we didn't really recover from our shaky start. Further slow going between Birmingham and Wolverhampton left us nearly thirty minutes down. My connection at Carlisle was looking very shaky. One glimmer of hope was that the 14:22 to Stranraer was a through train, originating in Newcastle and booked to use the same platform as we were. A journey which should have been fairly relaxing was once again becoming slightly tricky.

Once north of Preston we seemed to pick up, with the Voyager tilting like crazy around the curves of the WCML. Noted we were a little over 20 late now, and the connection was looking possible, if shaky. They would presumably let the Voyager go first anyway. Finally rolled into Carlisle to find the 14:22 idling at an adjacent platform. Through the buffet and on board. No seats so languished in the vestibule as far as Gretna, making checking Kingmoor depot fairly tricky. It was turning into a bright autumn afternoon, and the slow meander to Kilmarnock was very pleasant. Here the train filled up again, mainly with students I think, before turning west again and heading for Troon and Ayr. Finally, this track is off the list!

The final leg for today was to change at Ayr and head into Glasgow. Curious platforming made this an easy cross-platform switch, and soon I was heading into the City, along with thousands of others who piled into the train at Prestwick Airport. Really good to be able to walk directly off the concourse and into my hotel too. The hotel lived up to expectations - cavernous and slightly spooky in some ways, with my room at the end of a long echoing corridor. The view from my window was fairly amazing too - a panorama over the glass roof of Central Station and the lights of the city South of the Clyde.

It's always good to be back in Glasgow, and my first instinct is always to visit all of the old haunts - impossible in an evening. Straight out to the 13th Note - still possibly my favourite drinking den in the world. Sure it has no beer range to speak of, but the jukebox is always inspiring and intriguing, and it's the only place I've found where you can encounter a young girl knitting and drinking coffee in the same establishment as a vegan cafeteria and a live thrash metal night! Spent longer than I meant to before going in search of food. I'm glad I spaced out my Glasgow visits this time around, because I hope to be back on Friday.