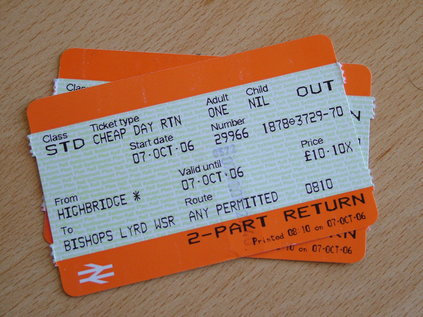 This weekend the West Somerset Railway holds it's Autumn Steam Gala. Much as I love the scenery and the ambience of the WSR, I'm always disappointed by some staff member's attitude to Diesel traction. This seems to have been compounded by a lack of Diesel gala this year and by management recently announcing that "the WSR is a steam railway". In this climate, and alongside First Great Western MD Alison Forster recently saying she "'didn't think steam engines should be on the mainline" today saw an unlikely alliance!

Through ticketing onto the WSR

Set out on the 08:07 from Highbridge. There appeared to be a few steam cranks on board. The guard had a little difficulty issuing the return to Bishop's Lydeard but eventually coaxed the Avantix machine into action. Wonderful weather on the short journey down to Taunton - can only hope it holds for my week away. Platform 2 at Taunton packed with WSR staff, FGW staff and a few press interested in the event - the first service train to work through to Bishop's Lydeard since 1971. On time, a single 158 crept into the platform with a makeshift route indicator for Lydeard. We piled on and crawled slowly past Fairwater Yard and onto the branch at Norton Fitzwarren. After passing the army base and the location of the WSR's proposed turning triange, we were soon passing a line of steam locomotives ready for the gala, and drawing into the station. 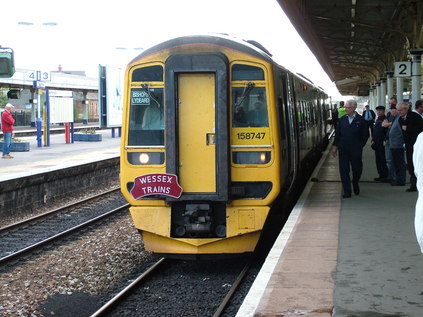 Stayed aboard for the return trip, and I was surprised at the number of people who got on for the first ride back. As we passed Norton Fitzwarren we halted - an elderly female was walking her five dogs on the track. A British Transport Police officer travelling with us stepped off to have a word - "but I've been doing this for thirty years officer!". Held again at the junction for 6201 Princess Elizabeth to cross into Fairwater Yard awaiting an incoming charter. Soon arrived at Taunton and the adventure was over - a tiny bit of track in some ways, but one I've waited a long time to travel.