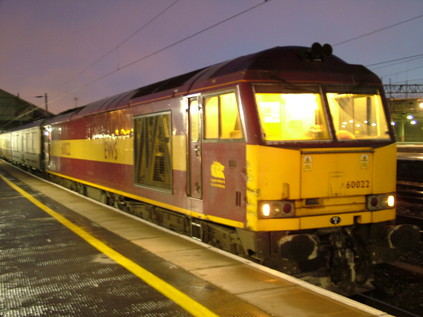 Reluctant got up around 5am and checked out of The Crewe Arms. Over to the station for a very quick breakfast and a chance to look at 60022 which was at the head of the stock for our 0650 departure. Grabbed a shaky snap in the dark, before finding my seat and preparing for the trip. Soon joined by a couple of companions, and we were off on time travelling first to Shrewsbury, then via pick-ups at Birmingham New Street and Nuneaton to Leicester. Despite starting out misty and damp, things began to clear as we approached our first locomotive change at Toton.

60022 prepares to haul The Grid Arising to Toton

Railtours are often prey to last minute changes and confusion - its part of the fun in some ways. This one was no exception. A little after boarding we learned that due to the derailment at Copmanthorpe earlier in the week, we couldn't get to York. Network Rail's plan was to have us sit on Doncaster Two Way Goods line for ninety minutes and meet the Fastline 56 there. Whilst we waited to hear if any off-train break would be possible, we also learned that we weren't going to be meeting a GBRf 66/7 at Toton due to a lack of availability. After a short wait, and a chance to view the contents of the depot in unusual detail, 60028 was attached to the rear and 60022 headed for the shed. The next stage was a turn across Lincolnshire, taking the rare Lincoln avoider between Boultham Junction and Pyewipe Junction, and heading via Gainsborough to Doncaster. Noted some curious cabbage-like plants growing in the cess at Gainsborough! From here our route was a little altered to account for the problem at York, and we completed a circle via Shafteholme Junction, Knottingley, Hambleton and Temple Hirst, arriving back in Doncaster with 56302 ready to join the train. Not my finest photographic moment. 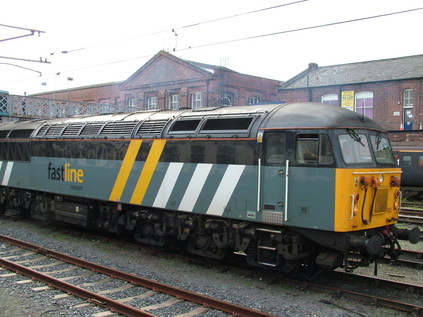 56302 sneaks past to join the front of the train

With our celebrity locomotive and headboard attached we set off northward again, branching east towards Scunthorpe. This was an interesting diversion, via the Immingham Tramway, passing the Traction Maintenance Depot and the docks, before heading back towards Gainsborough and Retford. Once onto the the 'tramway' at Ulceby, we made slow progress, giving again ample opportunity to see what was stored. Back onto the mainline at Grimsby Marsh West Junction, and things picked up a little.

There was a further section of rare track today too - after heading south at Worksop onto the Robin Hood Line, we turned west again to Pinxton, rejoining the Erewash Valley Line at Pye Bridge Junction and heading once again for Toton at a snail's pace on the freight lines.

We'd known all day that there were problems with finding a Freightliner driver for the last leg of our trip. However it had been unclear what EWS had in store as a replacement. Soon heard we were to be double-headed by 66043 and 67005. After a sluggish loco change we were running around 20 late and my 2045 connection at New Street was looking shaky. 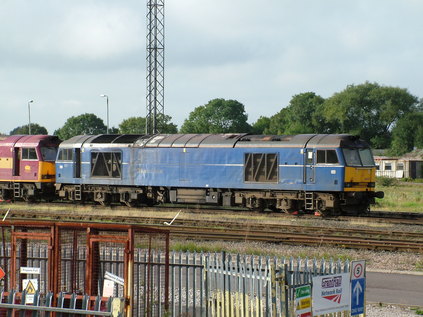 Once past Loughborough and onto the fast lines, we made better progress and started to pick up time. Connection was more or less out of the window however, so started planning for a later arrival in Redditch. Finally bade goodbye to the train and my fellow travellers in the dark at Birmingham. On the way upstairs heard the 20:45 to Kings Norton being called as just arriving. Used the very last of my energy to haul my ridiculous bulk over to platform 12 and collapse into the 'Quiet Section' of a 323. So exhausted neglected to get the numbers for movebook purposes. Made a couple of calls to indicate I was back on time, and changed for the bus at Kings Norton for a quick, sleepy and smooth ride into Redditch.

An entertaining day, despite concerns the buffet would run out of food due to lack of a stop! Sometimes things don't go to plan, but this kind of tour is beset by such difficulties, and will often turn up a gem. The chance to ride behind 56302 on the first railtour for this particular subclass was a real pleasure though. Another happy day which has left me exhausted - fifteen hours without a break being tough, even for a ned like me!