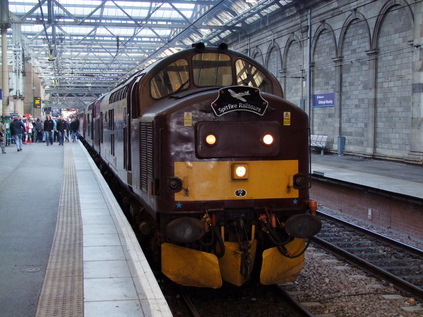 Discussing today's trip last week on another tour, staff and punters alike had expressed some trepidation. There have been lots of stories about how Network Rail have been slow or uncooperative about tour timings recently, but few tours had suffered the the number and scale of cock-ups which this one had endured before it even turned a wheel. However, the important thing was that it was happening - and despite feeling a bit post-viral I even managed to feel pretty enthusiastic as I trudged through Birmingham before 5am! Despite the lift being awash with discarded chips, and some very dubious goings on in the telephone boxes, I was looking forward to the day ahead. Found my way to the correct platform thanks to an announcement - rare at this time of the day at all, and particularly for charter trains at New Street! Bang on time, 37038 and 37601 thundered out of the tunnel and I found my usual seat in the pleasantly warm carriage, alongside the usual suspects.

The early start meant a couple of hours of darkness so time was spent catching up with news, welcoming another familiar face from previous tours, and enjoying an excellent breakfast. Once the sun rose, it did so in some style with clear blue skies as we sped north along the West Coast Main Line. As we passed Crewe, noted that the Deltic tour operated by Pathfinder clearly hadn't left before us as booked. We later heard the train had departed around 40 late, and was behind us. Despite this, we still ended up looped as booked. The train was still some way back as we reached Carlisle, where our paths would part temporarily as the other tour headed for Kilmarnock, and the freight-only line via Mauchline Junction - track I need which caused a twinge of regret. However, the day had become pretty sociable and entertaining, so I settled in for the trip via the Edinburgh Suburban line into Waverley. Spent the short break here finding lunch, getting some photographs and noticing how cold and wintry it was!

On departure from Waverley, noted that the weather was getting pretty grim as we headed west. Out via Haymarket and onto the former branch to Bathgate. Now a double track mainline, we made pretty swift progress, passing on to the new line proper at Bathgate via a surprisingly tight curve which took the line south of the town centre. New stations on route were in varying states of completion - but overall things appeared to be shaping up for the official opening. Three Class 334s - the unit which will work the line - sat in the new Depot facility at Bathgate, from where they have been working test trains over the line. We should have passed the Deltic tour somewhere on the line, but in fact didn't see it until Bellgrove - meaning of course that we'd traversed the line completely before the other tour. This wasn't lost, and some good natured texting went on between the tour trains. Noted later that Internet chatter had tried to make a bigger deal out of this than was necessary - a shame, as two well-loaded charters can only be a good thing in these times? 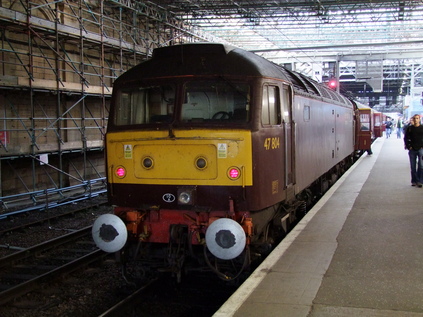 47804 provided ETH and hauled the tour back to Edinburgh

Out train made rather sluggish progress through a very wet Glasgow now, using the City Union line, and passing high above streets I was walking just a couple of weeks back. Spotted some key locations, and confess I experienced a pang of regret that we weren't getting the originally planned break here, or that I wasn't around for longer. Soon found ourselves at Shields Junction where we reversed, rather than heading into Central Station. From here, 47804 led - doing pretty well with a heavy train over the Shotts route in wet and slippery conditions. Back into Edinburgh for a very short break before retracing our steps towards England. The route back was dogged with odd timing issues - a fair number of loops, then a diversion via Bolton and Manchester Piccadilly. The biggest issue though, was the refusal of calls at Wolverhampton and Birmingham New Street on the return trip, despite pick-ups being made. A Tame Bridge Parkway stop had been inserted - initially in the return, but eventually both ways - but this meant a range of options for me to get back to my hotel, depending on our timings. In the end, feeling tired and having eaten and drunk more than was strictly sensible, decided to bail at Crewe for a fairly sensible connection to Birmingham. Tame Bridge was possible, but meant either a mad dash or a very long wait - neither of which I felt up to at all!

So, I headed back into New Street feeling pretty rough on a unit full of screaming Saturday night revellers, at the end of a very long day indeed. Not quite how I'd planned this trip, but overall the day had turned out pretty well. New line done, old friends caught up with - and a lot of mileage with a decent trio of engines. Certainly not sorry to see my bed though!