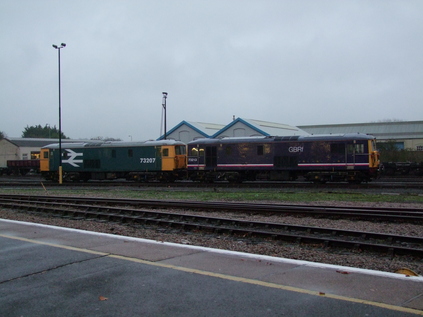 It was almost light when I set out for Southampton Airport Parkway station, which was something of a novelty after recent weeks. An Eastleigh start meant a fairly simple manoeuvre to get to the tour today, using the tried and tested airport Premier Inn. Pondered as I walked to catch a train for the short hop into Eastleigh, how I'd spent a fairly significant chunk of the last month in these places. It's a strange hobby at times - and once I find difficult to explain! Time for breakfast at the station, with the always entertaining Italian proprietor of the independent buffet over-run with orders. The advance gen that no hot food would be on the train due to Riviera not having suitable stock down south had clearly got through to the masses. Noted as I queued that our train had made it onto National Rail Enquiries too, as the 07:30 to Tilbury Town. This of course only told a tiny part of the story! Soon heard that with ballast trains making heavy claims on the locos here, one was being sent from Westbury to form the other end of our train. This led to a delay of about 35 minutes, but it was pleasant to wander about the station chatting as the sun rose, and to finally get a picture of the pair of Class 73s lurking in the yard. This was in fact pretty much the only picture I managed all day, given the nature of these tours and the dark and dingy conditions this morning.

Soon off, with a fast run into Waterloo. More seats filled here and later at West Hampstead, with an almost complete set of BLN sub-editors in attendance once again! The train was pretty full now - with none of the mass invasion of part-fare vigilantes which had been threatened. One interloper appeared and was dealt with stiffly and surely by our Gen. Sec. without too much fuss. Quite right, since these tours with their unique opportunities to get into some of the most curious corners of the network are costly, and as a society it's a given that we share this in order to get the opportunities. No doubt a dissection of the tour on the internet will throw up all sorts of silliness however. From Waterloo we took the very rusty looking Sheepcote Lane curve to access the West London lines. Onto the North London at Willesden, and a chance to discuss with people much more expert than I how these lines had changed recently. Noted an all-Class 172 service now running on the Gospel Oak-Barking service too. Using the connection at South Tottenham, we ran through Barking station and onto the LTS, nearing our main objective for the day.

Here we slewed into the once busy Ripple Lane Yard, now a pretty desolate spot, the area has been altered considerably to accommodate the Channel Tunnel Rail Link, which surfaces from its tunnel into Central London here. Our first goal was the Stora or H Group siding, and creaking along the goods line we were soon curving away from the yard into thick vegetation, climbing over what may well have been the 'hump' from the days of wagonload trains, and as far as we could get into the siding. The plan was to reverse back to the West Yard here, but instead and to our surprise, we used the flat crossing over the main running line to reach the gates of the shed marked as Ripple Lane Railhead on the Quail map. Once again, Gas Hill's persistence and knowledge had paid off with a bit of unexpected track! After further machninations in the Ripple Lane area, we set off east and passed through Tilbury on our way to Thames Haven. I'd been here once before and if anything the place had become more unloved and decayed than ever. Evidence of life at the Gas Works, but the yard seemed to have barely been visited since my last trip. We pressed on right to the end of the siding, the tracks disappearing under grass - and getting much further than the Traffic Centre where we halted on the last trip. A further reversal here, and a bit of lost time as we headed back west to Purfleet. The last bit of industrial track in the area was the 'Long Siding'. Apparently in fact, two sidings considered one long branch operationally, with a number of connections leading from them into an aggregate terminal and the Ford Motor Works. Our progress along this branch was a little less complete, reaching a crossing just short of the Ford works - but even so, it was clear that this was not track which would crop up on any other tours soon - so another job well done!

Our route back was equally interesting, after passing Stratford and negotiating the tangle of track around Channelsea Junction with its changing Olympic landscape, we reversed at Temple Mills loop, beside the Eurostar depot. From here, covering the third side of the remodelled triangle at Channelsea, we headed into Liverpool Street, where many of the London contingent left us. Naturally I remained on the train for a traversal of the Graham Road curve, still an interesting area given my perambulations around Hackney. As it began to get dark, the journey over the rooftops of North London took on it's normal comforting and rather magical feel. One last bit of unusual track on the way home, as we headed via Acton and Kew onto the Reading line, and used the connection at Addlestone Junction to get back onto the route to Basingstoke. Pretty much back on time now, we made much quicker time on the mainline and sped back to Eastleigh for a sensibly early finish.

Getting involved in the Branch Line Society has brought a fair bit of stick for me - it seems that in a hobby universally derided by the common populace, there is a pecking order - and that those of us interested in track, routes and operations are somewhere near the bottom. It's a sad irony, since its that very track which underpins all the other railway interests from haulage bashing to photography and all points in between. I could call for peace talks, and try to explain that by bickering within the hobby we all suffer, but I suspect it's a pretty human approach to create hierarchies within hierarchies. In any case, if the Society continues to operate such interesting and successful trips and remains such a sociable and knowledgeable bunch, I'm happy where I am in the food chain!