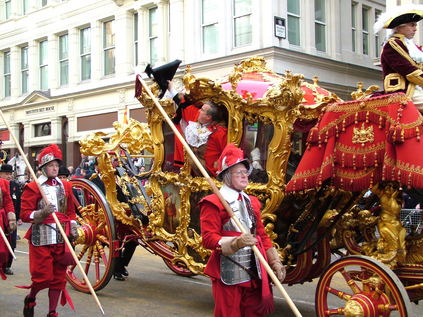 Up at the now customary time to head out of Highbridge on 2M02. Quick journey up to Bristol, with time to note that pet powercar 43130 was on the front for our journey via the Berks & Hants to London. A cold clear November morning - perfect weather for another Lord Mayor's Show. Breakfast plans in tatters due to a lack of 'hot breakfast items' in the buffet. Can't imagine the rugby crowd in Standard Class were too happy! On arriving, tube to Blackfriars for coffee and a bite to eat. Wandered up New Bridge Street and onto Ludgate Hill, and found a spot not far from last year's vantage point. Bang on 10:55 the RAF flypast signalled the start of the parade.

As usual, a fair selection of military bands, community floats and livery company efforts - many focused on the interests of David Brewer, the new Lord Mayor. Hence Cornwall, China and Basinghall Ward Club all got involved. Noted a high profile security presence atop the buildings around us.

Wandered into the city to find lunch, and as custom dictates, picnicked in Abchurch Yard. Confess I was feeling pretty exhausted by now, given an early start and what felt like the beginning of a nasty cold. Tried to walk it off by heading east, then through Austin Friars and Moorgate to Whitecross Street. Arrived at Farringdon station feeling thoroughly sick and tired, so headed back to Paddington. Had considered staying for the firework display, but it's really not the same when you're watching on your own. A quiet and relaxing journey back meant lots of reading, and a slight recovery by Highbridge - certainly enough for a few pints at The Coopers Arms before struggling home on aching feet.

The Lord Mayor's Show doesn't change much from year to year, but for a cynical atheist like me this kind of continuity is strangely important. 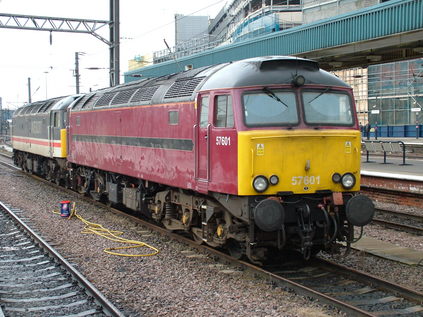 Another early start in the darkness of Highbridge station. Changed at Weston for the soon to be legendary 1S49. Met a work colleague heading for the Midlands to buy a car, and passed the time to Birmingham chatting happily in rapidly improving autumn weather. Once again, sent via the scenic route of Worcester and Kidderminster. Off Birmingham after quite a wait, and some quick running as far as Derby where we reversed via Long Eaton and a first for me - the run through Toton to Trowell Junction. Any hope of getting everything on the depot was dashed by the presence of a massive crowd of football fans heading for Chesterfield wondering why the journey was taking so long. Chatted to one or two of them as far as their destination.

The weather deteriorated as we sped north, and on leaving Sheffield things looked bleak. Put it down to the gloomy stretch via Mexborough and Swinton, hoping for a change. Arrived in Doncaster in a deluge and sprinted for cover so quickly that it was some time before I realised that 57601 and pet Duff 47826 were stabled just inches from where I arrived!

Queued for coffee among a crowd of very damp passengers, then wandered around the station chatting to fellow cranks and generally watching what was going on. A busy couple of hours for a Saturday including a number of weedkiller workings and a few freights. Highlight in this respect must be the surprise convoy of 66080, 60087, 60027, 60011 and 66208 which passed by at speed - not making for the best photograph. 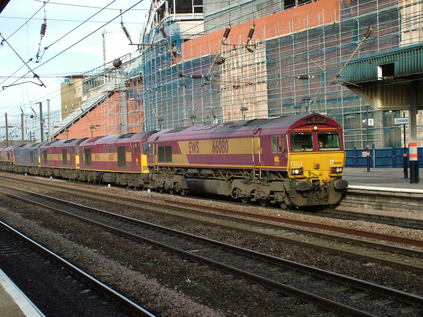 Determined to get a least a quick look at one of Hull Trains new 'Pioneer' units. After a wander over the rickety footbridge to find Cotswold Rail's freshly painted but unnumbered 47033, I finally got a chance when 222101 arrived on the 1359 to Hull 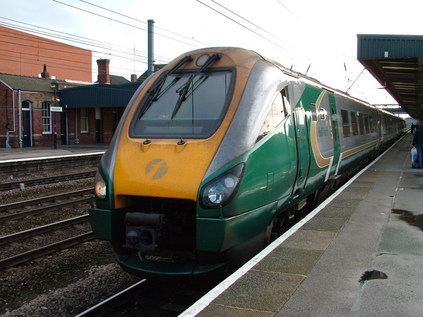 Left Doncaster after a pleasant couple of hours on the 1435 to Kings Cross. Speedy running in fine evening sunshine. Even this wasn't simple however as south of Stevenage, moments after seeing my last class 67 pass by, we forked left for Hertford North and Gordon Hill - more, albeit unexpected, new track for me. A quick underground trip to Paddington and aboard the 17:30 for Highbridge along with lots of Arsenal and Reading fans heading home. A relaxing trip, followed by a few welcome pints at the Coopers. Some decent mileage, interesting sightings and an excellent way to wind down after a busy week.