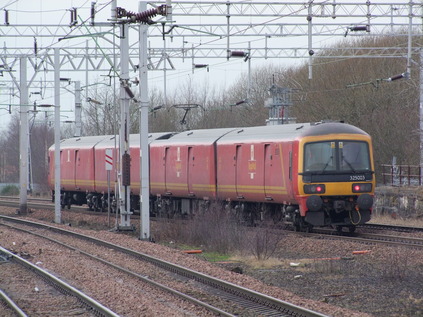 It seemed strange to be waking up in Glasgow. Although I've paid several flying visits during this past twelve months, it's been a full year since I spent any amount of time up here. Once again I'd made the mistake of sharing the city with an unsympathetic soul, and as I gazed out of the window overlooking the burial ground of the Ramshorn Kirk, I reminded myself that it wasn't anyone else's fault that I had a such a strange attitude to the place. Resolved to have an interesting day pottering about the railways and revisiting some of the trips undertaken back in 2007, the inaugural year of these February excursions. My setting out was delayed by needing to get a little work done, but since the Strathclyde 'Daytripper' tickets don't start until 09:00 not much time was lost in the event. So the first move of the day was an Anniesland train via the North Suburban line from Queen Street. Little piles of snow were stacked neatly against the back of the platforms as we passed the stations on route to Anniesland. The train was quiet, and the sun was just breaking through. It promised to be an interesting day.

Without a plan as such, I played things by ear and decided to zig-zag around the city for fun. My travelling companion needed the majority of the track in the city, so there was no conflict of interests here. At Anniesland, onto a Motherwell train via the Argyle Line, which we saw through to it's conclusion - rounding the Hamilton Circle and into the furthest reaches of the odd station. Used the new footbridge to head over to the main concourse for a Cumbernauld service via Mossend Yard. I was feeling a little under the weather to be honest, and suspected missing breakfast wasn't the best idea. Finding the much respected snack bar at Cumbernauld open despite its barricaded appearance, I finally breakfasted - and regretted it for much of the day as the greasy but tasty local morsel sat heavily in my complaining stomach.

325003 passes Newton in a rare solo movement for this class

From Cumbernauld, back to Queen Street and a walk over to Central Station under slate grey skies which the sun gave a characteristic silver hint. I was happy just to be here, zipping back and forth on trains which I'd done before. Next plan was to head out to Newton and back, covering each side of the Cathcart Circle. A rather quiet trip out, soon arriving at the forlorn outpost at Newton. Found a spot at the end of the station and watched traffic on both the suburban and mainlines. Plenty happening, including the rare sight (nowadays at least) of a 325 unit moving under it's own power. I'd reassured my companion at arms that the wait at Newton would fly by, and sure enough it did and we were soon heading back via the other side of the circle. Time for one last trip before the evening peak began in earnest - a little earlier of course because it was Friday. This last turn of the day was an out and back jaunt to Paisley Canal, passing the depots at Shields and Corkerhill - though little was on them with the busy evening due to start shortly. Back into Central just as the crowds began to gather for the dash homeward. 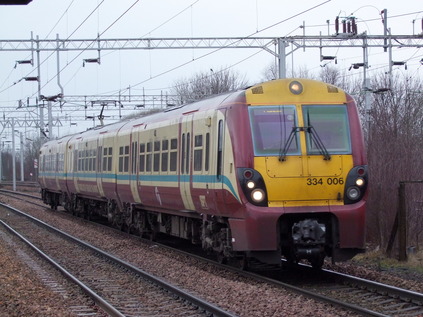 334006 calls at Newton
Later, still feeling a little below par, headed out for Chinese at the Kings House and then walked over to the 13th Note - for me a sacred place of happy evenings just watching the world go by and listening to the best jukebox in all Scotland. Or lurking downstairs while bands, just formed and probably not far off breaking up, tried out their songs in front of a noisy crowd while minor local celebrities handled the door duties. To a fresh pair of southern eyes though, it was a bewildering place - neither pub, nor cafe, nor restaurant - it just did not compute. I asked my colleague what he thought of the place, and he mumbled something about the graffiti in the gents before dashing downstairs again.

That graffiti is of course a little bit of Glasgow history. I'm not sure it was appreciated though. Another strange night in Glasgow I pondered, as I trudged back to the hotel feeling very sluggish and still wishing I'd not bothered with breakfast.