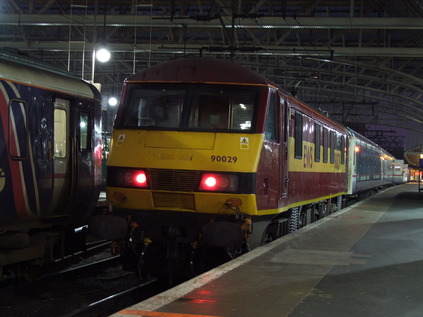 The second and final full day of my Winter retreat to Glasgow started with a promise of decent weather - but there wasn't much sunshine to be seen as I stumbled along George Street in order to get to Central Station for the 08:00 departure. The plan was to head west to the coast today - covering as much of the track as possible, though for me there was nothing new. However, I've always this journey and it did seem like too long since I'd covered some of it, so I was happy to tag along for most of the day at least. However, I also had an itch to be abroad in the city again - something that I hadn't really done this visit. I'd wandered a little on the first, practically wasted afternoon after arriving - but I needed to wear my boots out a bit on the pavements again. Time for breakfast at Central Station before snapping the recently arrived 90029 which had hauled the Lowland Sleeper. After stowing the camera away, boarded the Ayr train which was unusually a pair of 318s. Off on time, through Shields Junction and Paisley Gilmour Street, with the sun just coming up as we curved to head south onto the coast. There was just a hint of an orange glow over the Firth of Clyde as we pressed on, making good time into Ayr. Time for a coffee here before heading back the way we came, at least for a while.

I'd calculated we could arrive at Dalry with only a few minutes to wait for an Ardrossan Harbour service. Since the Harbour trains are perhaps the least easy to work into the schedule, felt this was a good idea even though it made getting to Largs difficult this morning. Consulted the fellow traveller who was keen to go with the plan, despite not sharing my romantic vision of railways to port towns, which he just saw as "run down dumps". With a little sun glancing onto the distant isles though, the visit to Ardrossan Harbour was a rather pleasing and quiet few minutes before once more heading back inland. This time as far as Paisley Gilmour Street, where a cross-platform change (via coffee emporium) left us with minutes before the next Gourock service. Managed to completely miss what should have been a fine shot of a freight working which sped past behind us however. Gourock has a decent service of semi-fast and stopping trains, which meant we could hop off at the once impressive terminus to wander around this rather strange corner of the coast. The rather hard-to-please fellow traveller actually rather liked this tumbledown corner of Inverclyde despite it's clear dereliction in places. Wandered briefly before heading back into the station to get the train back as far as Port Glasgow.

90029 on the blocks at Glasgow Central

Port Glasgow was equally odd - almost a single street with a couple of cross streets. Lined with tired looking shops and sliding down the hillside to the inevitable waterfront where there was evidence of docks and shipyards. Times looked hard, and there couldn't have been much to do around here. From Paisley to Greenock we'd seen endless boarded up housing blocks - some being redeveloped but others just burned and abandoned. Not sorry to return to the station - particularly as the next trip took us to Weymss Bay, surely one of the most remarkable gems on this coast? First though, the unit made short work of the bank at Bogston as the Gourock line fell away steeply to the north. Remembered the fun of doing this with 37s a few years back very fondly. The run to the coast felt no less grim that the Gourock trip, with some genuinely horrible places to live in evidence near the stations we called at. Weymss Bay however was wholly different - the line curving through the platforms under the smooth winding glass roof which all swoops down into the ticket office. There are few more dramatic examples of railway architecture, and it would have been interesting to spend longer here - however, the city called. I left my former travelling companion here to explore as I headed back into Glasgow at last.

On arriving at Central I headed first to Avalanche Records, before going briefly back to the hotel to regroup a little. I felt pretty awful still, yesterday's unsettled stomach developing into a full dose of the bug which had been circulating before I left England. Finally decided that sitting around was something I could do anywhere and dragged my miserable self out into the city. The afternoon had turned a little gloomy and the sky was a grey sheet. I turn east and headed towards the High Street - and thus began a retracing of old steps - cobbled and tumbling Nicholas Street on the old College lands, then south to Saltmarket, before dodging through backstreets to get to Osborne Street and then a pleasant hour spent browsing in Monorail. After that, a somewhat feverish dash back up the High Street to the station, where I headed down into the brick trough to get the next Springburn service. The light was fading from the sky now, and I made a quck change to a Queen Street bound train here, disappearing into the tunnel in twilight and emerging in full darkness it seemed. I found food and headed back to the hotel. It had been a strange and rather bewildering trip, and it was now practically over. Felt a bit guilty for once again dragging someone along with me and abandoning them in favour of the city I can't ever explain properly, but oddly found myself looking forward to tomorrow's epic journey south.