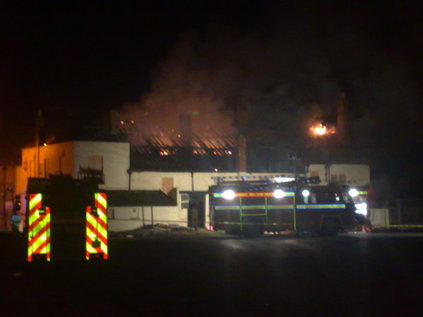 The debate about the regeneration of Highbridge turned ugly tonight. Over the weekend, a series of small fires have occurred around the town, most notably including a minor incident in the abandoned and boarded-up Highbridge Hotel. The same hotel which is Grade II listed in part, and currently owned by Mead Realisations - a group of businesses that specialise in redeveloping 'difficult' sites. Since the pub closed in early 2008, security on the site has been poor, and this once proud building, parts of which have survived since the 18th century, has slipped quickly into decline.

Tonight, after lazily listening to more fire appliances screaming by and sparked by a message from my sister, I looked out of the window to see smoke and flames in the sky. A quick look at the internet indicated that a fire had taken hold of the hotel. Like many others I was drawn out of my house to watch the building disintegrate before our eyes. I thought it would be crass to take my camera - but plenty didn't. My 'phone had to suffice to document events.

There was a strange, almost dangerous and semi-criminal taint to the atmosphere. Much of the town seemed to be lining the fence, groups of children playing chicken with the Police Officer put on crowd control duty - sprinting across the former market grounds to the line of tape and back as she lunged for them. Next to me a young boy said quite simply "this is the most exciting day ever!". Older folk reminisced about the pub, and about its decline - both before and after closure. Someone called the former landlord "Its OK, your 'book early for Christmas sign' isn't burning!". With the railway bridge closed again and the police turning cars back at the roundabout, the road began to fill with cars - mostly those of locals down to get a picture or watch the action.

Strangely, the Market was the centre of Highbridge once again tonight. People passed the time, bemoaning 'kids' or adding to the conspiracy theory about planning consent, listing and conditions. Only a full hour after the drama began did someone - a kindly soul - say "I hope there was no-one in there". Names of potential pyromaniacs were tendered. People reminisced about Jewson's burning many years ago. It was like the Carnival had finally come to Highbridge. I took a brief and very poor quality video, and again cursed my sensitivity at not bringing a better camera. It's curious to note the general level of excitement and banter among the watchers.

Whilst the conspiracy theories may well be unfounded, there are questions for the developer to answer about the security of the site and protection of the public. Since the Police were keeping us away, its hard to know if a salvagable facade remains. I left as the fire had died to embers, but it continued to retain the power to regenerate in a way the Town has never managed - springing up, bright and hot again in some new corner. The roof, collapsing under the jets of water, no longer containing the flames. The firemen trying to break skylights by throwing bricks and cheering each other's efforts on!

Whatever happens, one of the oldest buildings and perhaps part of the very core of the town is gone, and both the fabric and genus loci of Highbridge has changed again forever. Strangely though, the fire seems to have stirred some sense of belonging and place once again, and the reaction is threatening to turn against the 'developer'. Perhaps another chapter is already beginning?

Friends and regular readers will know that politics (at least in it's door-knocking and rosette-wearing form) hardly gets a mention around here, despite my long held interest. But I've had a few messages from friends concerned about my apparent political about-face, and more particularly about me ending my troubled relationship with the Labour party. I've always admired people who could stick with a football team, however poorly they were doing. The dogged, rather wonderfully British ability to plod headlong into adversity is always good to see in action. However, things have been going from bad to worse for my chosen party for a while now, both locally and nationally - and there has to be a point in politics where the emotional attachment to a romanticised, golden past gives way to a wish to actually do something useful to prevent your area from entering a terminal decline.

I don't know how this little plan will pan out quite yet. I've spoken with a few people locally, and I think for now I'll concentrate on my concerns regarding transport and development control here in Highbridge. In both I can claim some real local knowledge, and an understanding I think of what people here really feel is wrong. I certainly don't plan to make this page some sort of 'local politics' blog, because that sort of thing seems to exist elsewhere in a rather different form. But from time to time, I might post about how Highbridge is changing from my point of view. My site has always described me as a mixture of Victorian high Tory and half-hearted Marxism. As far as social justice, sustainability and responsible administration are concerned, the balance sometimes has to shift.

This morning, as the new railway timetable wreaked havoc on my working day, the mournful sounds of the cattle market drifted across Highbridge for the last time. From next week, the farmer's carts will no longer clog the roads on their way to the market near the Highbridge Hotel. Instead, they'll trek down to the new facility at Huntworth, provided by our local regeneration specialist, Mead Realisations. The Rural Business Centre is a bold and exciting move which will provide state-of-the art facilities - but the loss of the markets in Taunton and Highbridge will be grievous - particularly for our little town.

When locals talk about the corner of land between Clyce Road and the hotel, stretching back as far as the former wharf, they mutter about 'more flats' and shuffle off in dismay. It's probably exactly what will happen - the one positive being an undertaking to restore and improve the Grade 2 listed hotel to it's former glory. Once again, the character and balance of the town has changed - not necessarily for the better. It's been a little harder to get here since the bridge was narrowed, but the lack of farm traffic slowly heading into town each Monday will be yet another blow to local businesses. If the promises are kept, and regeneration turns from an admirable paper scheme into a reality, then maybe all this won't be for nothing?

As another huge truck rattled by a few moments back, I instinctively turned to the window and found myself gazing directly into the face of a cow likely facing it's final journey. Strange to think these will be some of the final journeys in another sense.

As I write, the annual Guy Fawkes Carnvial in Burnham (which of course pays lip service to Highbridge but never comes here) has just finished, and the giant unwieldy floats are snaking their way back to points south and west of here, shaking my house and filling the room with flashing warning lights as they pass. There have been lots of issues around access for the procession this year, from overhanging scaffolding on the procession route to the challenge of navigating the new ASDA roundabout. But the people want the carnival, and somehow it's been achieved again, despite all the handwringing and buck passing.

We've had our new supermarket for a week now, and despite the strange bout of anti-ASDA feeling in relation to the carnival, it seems that the locals have embraced their new neighbour. New pathways have opened - a strange alley which leads from the once quiet cul-de-sac of Grange Avenue into the wide and windswept carpark of the store, and a curious and almost unofficial exit into a back lane serving the rear of Church Street. The great hangar full of goodies seems bigger inside than out - more choice and cheaper stuff than we've had for years in Highbridge. The staff are all familiar local faces. It's hard not to enjoy the novelty of unmoderated consumption in a town where shops close more often than open.

On the first evening I visited to find some local types practically brawling - they were unhappy that 'Burnham people' were coming to look around but not buying. One older Highbridge resident standing in the doorway like an unofficial Town Crier berating the visitors from the north. Another resident complained that the store was not organised the same way as our other rival supermarket. But the layout is strangely familiar to anyone who has ever visited an ASDA or a Walmart store. The same items in the same order. Oddly comforting and surprisingly not dull.

And so Highbridge changes - more planning permission for more apartments will follow to complete the site. But sometimes despite the modern warehouse style supermarkets and monotonous three-storey flat blocks, new views open across the Somerset Levels - and raising my eyes above the line of the trolley park this evening I caught a glimpse of Brent Knoll, ancient and timeless in a crack of golden light between the clouds.