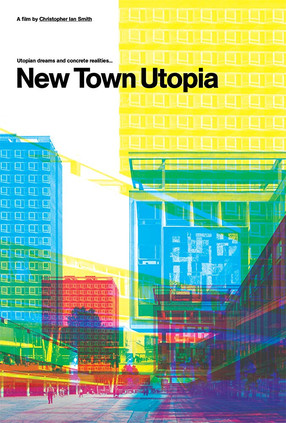 It's easy to be cynical about the history of planning in Britain, and especially easy to be scornful of those well-meaning but usually flawed efforts to build new communities which skirt neatly around the errors and problems of the past. When these developments arise - the garden city movement, the planned worker's villages of Bournville or Port Sunlight, or the Prince of Wales' village at Poundbury - they nearly always lack any kind of genus loci. In the same way, you'll often hear the New Towns which arrived in post-war Britain via a long-winded commission and various acts of parliament, lazily described as 'soul-less'. These towns were an attempt to finally eradicate the Victorian slums and to encourage people to move out of the bursting city centres where housing which hadn't been bombed out-of-use was in short supply. Like a great deal of post-war planning and architecture, they divide opinion sharply. They mixed a peculiarly British take on a socialist utopia with utilitarian simplicity and often appealed to a higher nature in their residents through the provision of arts centres, theatres and the like from the outset. But, these were consciously designed places which were still rare in a country which was struggling slowly out of the previous century with its progress hampered by two destructive wars. Provided with an unprecedented tabula rasa in greenfield sites and bomb-ravaged urban wastelands, they also deployed some of the newest styles of architecture and means of building - architecture which would have never squeezed past a fussy old planning committee in normal circumstances. This, along with the social changes which the 1970s and 80s brought to the country renders a particular image of a New Town today: concrete, streaked with rust, shuttered stores and abandoned civic pride. Is that unfair or inaccurate, or is it lazy to take this surface-dressing as a proxy for the lives of people living in these places? This film delves right into these perceptions and tests them over the course of a surprisingly human, affecting documentary.

I grew up in Redditch - a second-wave New Town, built when the cash was running out and faith in the project was waning. The Development Corporation was less ambitious than those who'd forged ahead earlier and satisfied itself with a sweep of new housing estates on the town's eastern green flank with some impressive American-style expressways to link them to the town's core. In the centre, Redditch saw the building of a new shopping centre/bus terminus combination which not only destroyed the original town centre street-pattern but mocked the locals' affections by parroting the old streets in the named 'walks' of the Kingfisher Centre. Basildon however, came earlier in the project - and was built with a greater sense of purpose and utopia it seems. It's position on open Essex land attracted industry, and numerous firms moved their plants to the new town. The future looked bright for this curious newcomer to the flat open spaces of estuarial Essex. They didn't build a railway station - people would live and work in the town, so who needed to get away? Over the course of New Town Utopia, Christopher Ian Smith meets the people who moved here, were born here and have in some cases tried to get away over the course of their lives. Many have been driven away by unemployment as local industry declined in the 80s, or have tried to follow their fortunes elsewhere - but a surprising number return. The film is built around the voices of these generations of Basildonians, their aspirations, dreams and impressions of life in the town. These are most often set against images of Basildon today: Patrick Keiller style unpeopled shots of long dual-carriageways, crumbling estates, litter-strewn footpaths. Basildon feels like a time-capsule of British idealism, a sort of mid-century sampler of design flourishes and municipal vernacular that wasn't to quite take to the mainstream. It is photogenic for the wrong reasons, impressive in its bleakness.

Throughout the film though, there is a surprising sense of something lost - something which perhaps these citizens only recently discovered they even had: a sense of being from Basildon. This unexpected attachment to the much-disliked newcomer features most strongly in two sequences: the first where locals discuss the arts scene, and the facilities which they have lost, regained and reused to continue a strong emphasis on creativity in a town which is all-too-often the uncultured and unreconstructed butt of jokes. The second occurs when the talking heads on screen consider the reputation of Basildon as a tough, violent place. There is an uncomfortable mix of dismay and pride in the reactions when they tell people they're from Basildon. But there is a concern in all of them, young or old, that the sense of being from the town is ebbing away: London draws everything in, people work in the city and sleep in Basildon. Things are changing again here, and they now have a railway station.


The film explores a further uncomfortable divide: the impact of Thatcherism on Basildon. Older residents bemoan the loss of the industries which moved with them to Basildon, which they relate specifically to the government's policies. In fairness though, the local factories (tobacco and camera film) were not publicly owned and were ill-starred already by future obsolescence perhaps? The locals also celebrate the ability to purchase their own homes and the chance to create roots in the new town. A retired trade union organiser and councillor is upset that his children don't want to vote Labour and thinks that weak unions mean weak businesses, while a middle-aged Basildonian admits with some embarrassment that the changed economy of the 1980s gave him the chances he needed to get ahead. There is a shame in seeing the positive changes in society - it just doesn't fit the idea of a worker's town which they were encouraged to support. Throughout the film, Jim Broadbent intones the words of Lewis Silkin MP, Atlee's housing minister who believed that newly created places could instil a Matthew Arnold like 'sweetness and light' in population which was not divided by class or profession, by age or race. Arts, culture and green space would be the engine of this change - and it's fair to say that from the moment the Basildon Development Corporation handed over the town to the Local Authority, it's these very things which have suffered: gradually chipped away in the interests of reduced costs and increased density.

The film concludes that while the placemaking and aspirational building of Basildon hasn't entirely worked, that Silkin was almost right: Basildon today, despite being in the overwhelmingly 'White British' band of population which stretches east of the Capital, is a placed of mixed experiences, backgrounds and outlooks. It's impossible to imagine the infectiously optimistic Hippy Joe - 'Essex' patch stitched into the groin of his dungarees - wanting to move away from the community of musicians and fans he runs a club for, but it's equally difficult to expect the current generation of young Basildonians - whether future poets and musicians, lawyers or bankers from wanting to be limited by the boundaries of this curious place. This film treats all of these voices with dignity, decency - and most importantly, it allows them the space to expand on their views without descending to soundbite and snapshot.