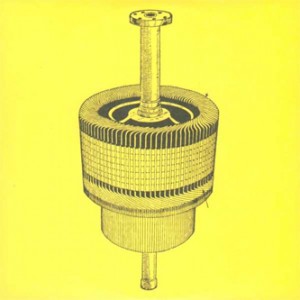 I sometimes wonder why any of us, bloggers or journalists alike, feel we have the right to expound on music. After all, it's art isn't it? There's no right or wrong way to go about this stuff. But then there is something about being the consumer here, and of demanding a level of quality which suits. Of course if it were that simple, we'd be writing dispassionate pieces for Which? magazine, stressing that this disc is reasonably good value because it clocks in at 41 minutes. FOUND have intrigued me for a while now, because of the explicit and unashamed artistry explored in their work. Indeed, it's impossible to read about them now without the baggage of Scottish Arts Council funding and their various, wonderfully outlandish projects being unearthed. But what is exciting about "Factorycraft" is how it bypasses all of this mythology, all of the confusing detail which made me wonder if FOUND were a band I could relate to? It's just a ridiculously good record. I could probably end this here, but - because we never do err on the side of brevity in the blog world - I won't of course.

So, for the uninitiated FOUND are three gentlemen from Edinburgh who got together at art school. Via a couple of confusing but brilliant albums, an ongoing dalliance with Fence which like all that label's dealings is never quite over, and the ambitious effort of releasing a ton of free stuff over the last year, they come to "Factorycraft". The title is no accident, and from the beautifully designed sleeve to the lyrics of recent single "Machine Age Dancing" the hum of industry and the absurd depersonalisation of automation and mass-production is never far from the foreground. Proceedings open with an old favourite in "Anti-Climb Paint", but it's been refreshed and reworked with slashing guitars and a choppier rhythm. However its howl of sexual frustration remains intact and as potent as ever. It's followed by the curiously titled "I'll Wake With A Seismic Head No More" which bleeps and shudders into life, before performing the musical equivalent of a tightly executed three-point turn into an anthemic rock chorus. Rarely do FOUND's songs remain in any niche or genre for long. The structures are complex - with a curious but insistent internal logic which is perhaps the biggest development since their earlier efforts.

"Blackette" slinks in behind a cartoon bassline, a deft touch of electronic rhythm preceding a simple, sing-along love song to particle physics - and somewhere around this point I realise that this is consistently brilliant stuff. Every song a polished gem of FOUND-style oddness, with a clever lyric and an unexpected turn towards the anthemic, before a shuddering time-shift into another genre entirely . On the previous FOUND records, there were plenty of strong songs of course, but their tendency to collapse in on themselves or to disappear far too soon into a fog of white-noise or bleeping was ever present. With this renewed focus, my personal album highlight arrives in "Lowlandness". It's a fantastic title for starters, but this disconcertingly wobbly ballad drenched in big guitars and burbling electronics resolves into a proper pop song in time for the frankly superb chorus. The lyrics displaying a touch of wry humour into the bargain. On "Every Hour That Passes" this reaches an Arab Strap-eque level of embittered introspection with "its a safe prediction you're sick of me, because I make you sick predictably". Another trademark FOUND focus shift, and the band are chanting "we're just not getting on" like a woozy punk chorus line. The wordplay and dark humour behind the lyrics is a constant delight too on "Factorycraft".

The album ends with "Blendbetter" - a bridge between the past and the future for FOUND, swooping in with a dizzy jangle and a menacing electronic drone. It stutters and bleeps into being with a dark undercurrent, as a tale of everyday romantic ineptitude spins out into a drawn out wash of note-bending noise. And then it explodes...fuzzily and messily with a cry of "...now nothing can hold me back". As frustrated and unresolved as it is triumphant, the track fades as it entered. Breathtakingly good, and hopelessly addictive.

Pigeonholing music is a curious thing. We all know it's wrong and lazy, but we all do it. Even the most eloquent of bloggers can't avoid the occasional genre tagging incident, and it's an easy way of marketing music - just look at how many bands describe themselves in terms of others for instance. So what happens when a band like FOUND defy easy categorisation by switching their reference points sometimes two or three times per song? One approach is to pin down one aspect of the band and amplify it - thus my advance knowledge of their art-school pedigree and their multimedia antics. Another is to invent a genre just for them, and so we have the curious but pretty odd concept of "glitch pop". However, I'm going to attempt to take the third path here and try to let the songs speak for themselves. It feels unseemly to be bandying abount end-of-the-year superlatives just yet. However, at first spin it becomes evident that there is something very special at work here.