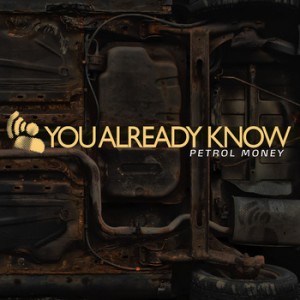 It must be difficult following a frankly stunning debut. I recall back in the 1990s when I still pored over the music press in the hope of hearing about new things, there was a running joke in the NME about the 'difficult second album'. It's hard to know whether it was meant to be difficult for the artist or the listener? Perhaps though it's both - with expectations raised by a sterling debut, bearing down weightily on artists who now have a reputation and a recognised niche to occupy. The best bands seem to shatter the box on the way out, taking our preconceptions with them. Others choose to make their chosen bit of the musical world their own little palace. Both routes are fine - but it's pretty hard to live in both worlds at the same time.

But You Already Know seem to be doing just that on this new album, a follow up to 2009's "Stop Whispering". That debut was uncommonly fine - a mixture of light and dark, punishing solid riffs alongside moments of near-epic grandeur. It was, for a little while in the post Christmas lull of early 2010, pretty much all I would listen to. Instrumental music has it's place - and anyone who tells you it's dull or boring is clearly more interested in the cult of personality around the singer than the song itself. However, there are some bits of this record - particularly early on - which are just a little dull and almost a bit YAK-by-numbers. The album starts with a clear statement of what to expect with the solid, thunderous "Let's Fuck". It thuds relentlessly along with a dangerously non-ironic 'metal' solo squealing away in the background. When this surfaced as a single back in late 2010 it was a fun cobweb-destroying romp, but in the context of an album with a fair bit of this kind of material up front, it's a little less convincing.

Happily, by the time we reach "Amber Lamps", YAK are back on form, and the album improves exponentially from here in. The bludgeoning, hard-edged rhythm section remains but is tempered by a more melodic, soaring element which takes these songs beyond the grime and grunt of the early part of the album and into a more interesting dimension. YAK seem to have settled on a sort of metallic take on post-rock which is eminently listenable and emotionally engaging - which is never easy for entirely instrumental music like this. The latter part of this record manages this by having an undercurrent of soaring melodies which temper the storm which the band are capable of creating.

"The Gush" represents a return to the thrash and burn of the first part of the record, but is followed by the initially menacing but ultimately gorgeous "Meatshield". Here YAK slow the pace and quell the urge to rush for the end of the song long enough to produce a contemplative, almost gentle post rock hymn which explodes with satisfying fury - and keeps exploding until it reaches a swooning anthemic conclusion. This inventive and more restrained technique is maintained through "Into and Over You" which stacks up around a martial drumbeat, building towards a searing ending. The album returns to it's roots for the closing "Business Class" which combines a filthy, funk-metal bassline with a roar of guitars. It's difficult not to love this closing riot of noise, just because it breaks all the rules and demonstrates the playful ambivalence to genre and stereotype which YAK have developed.

Despite my whines and gripes about the early part of this record I find myself coming back to this collection of songs in different ways - the first few songs perfect after frustrating days in the office, and the latter part of the album for brilliant cold morning commutes. I'm wondering perhaps if it's all in the sequencing of the tracks? This is something which is hard to get right - and in the post-CD age where people have the freedom to rearrange things easily, it's sometimes perhaps not given the attention it needs. In any case, this is a noisy beast of a record with a sense of humour alongside it's epic and serious moments.


You Already Know - Into And Over You