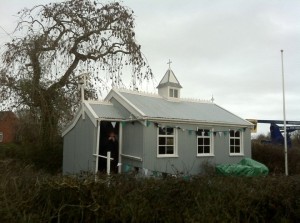 It's not often I need to begin a live review with a picture of the venue, but on this occasion at least it saves a lot of explanation to bewildered readers. Trevor Moss and Hannah-Lou promoted their first album by touring the UK's village halls, and now following signing to Heavenly and in advance of their second record, they are touring the remaining Tin Tabernacles around the land. I'm lucky enough to have one of these originally temporary places of worship fairly near to my home. However, being an avowed atheist, despite having passed by over the years of living here, I'd never been inside until tonight. There was an authentic 'church fete' feel to proceedings from the start. Access to the church was via a narrow bridge over a rhyne, which was signposted with a hand painted board and a little lantern. This was necessary - it was very dark indeed out here in the sticks. Once inside the tiny building, I was greeted with a wood panelled room with small and uncomfortable looking wooden pews. The stage was a tiny raised area beyond the altar rail, and tickets were checked in a cupboard just inside the door. All in all, this was an inspired choice of venue - and I harbour secret hopes there may be ways of using it again.

So following a surreal introduction from the local Vicar, first up was Pepe Belmonte. Pepe's origins in West Cork, and from his own accounts a fairly nomadic life, have left him with a curiously placeless and unfocused accent. This allows him to slip effortlessly from his own, simple and precise English folk ballads to a take on 'Carrickfergus' with little effort and a massive confidence. If anything, his delivery was hushed and a little restrained, but that probably had a lot to do with this being a truly tiny venue with the audience quite literally in his face. It may also have been due to the fact that the Church Committee seemed to have bagged the majority of the tiny amount of tickets available for this show, and were clearly expecting some appropriate and wholesome entertainment! Pepe's strengths tonight were in the more upbeat numbers, where his lightning-like picking technique and malleable voice warmed-up the restrained crowd. He closed his set by inviting Pete Greenwood and Trevor Moss onto the spatially inadequate stage for an impromptu and rather excellent take on Gillian Welch's 'Everything is Free'.

After a short break, Pete Greenwood took to the stage alone for his brief set. Originating from Leeds, Pete seemed to embody the self-deprecating and gruff northern humour I've always associated with the city. This seeps through his songs, bittersweet stories which by his own account take a darker turn during the writing process. His delivery is quiet, understated and earthy - a whisper of a voice which occasionally soars when the song needs it to, most particularly on his own composition 'The 88'. Again, some truly superb guitar picking held the church spellbound. Somewhere mid-set Pete played an inspired and surprising cover of Stuart Murdoch's 'Another Saturday' - an obscure gem from 2009's 'Dark Was The Night' charity compilation. Pete left the stage as he'd found it - apologetic and clumsy, but without any need. This was remarkable music. We just don't get this kind of thing here!

Another interval, where the highly symbolic acts of passing around free glasses of wine and collecting donations took place. I'm assured though that this was to avoid licensing issues, rather than for any more sinister liturgical reasons. Finally, Trevor Moss and Hannah-Lou stepped up and we were treated to a warm, engaging set from this funny, clever and unashamedly enthusiastic pair. Starting with 'The Allotment Song' from their first album, I looked around to see the tiny audience spellbound and open-mouthed at their simple, clear and shimmering performance. The people who'd turned out just because "it seemed like the rather fun thing to do on a Saturday night in Burnham" looked most stunned. This was original music, from genuine talents, and here on their doorstep. The pair's voices twisted around each other - sometimes blending into one clear, high note. Working through a number of further older songs such as 'Concorde' and the desperate and plaintive 'England', Trevor and Hannah interspersed the compositions with banter which felt more like a conversation in the intimate setting. They were genuinely engaging people, clearly very happy to be here - and indeed on this tour of Tin Tabernacles - and grateful for the support, even in this tiniest of venues. Towards the end of the set, they talked about The Lantern Society - the London folk club they'd started, and how they'd met the other musicians on the tour. This led into a very different but equally affecting version of Pete Greenwood's 'The 88', rather a surprise to him too it seemed. The new songs performed tonight bode well for the recently recorded new record too, with Hannah's voice taking perhaps more of a foreground role on some of the numbers, and a new complexity which they pulled off in a tricky live setting without breaking a sweat. The audience reception to the set was as near rapturous as things get around here - it had been a successful night in Edithmead.

As people started to shuffle out, delayed by the encouraging activity around the merchandise area near the door and with an exhortation to join holy communion tomorrow morning ringing in their ears, I realised this was probably a one off. If we ever asked the Vicar to let us do something else like this he'd probably cluck and sigh and say "we'd have to see...". So, putting ideas of future cultural activities aside, I contented myself with having been involved in a truly unique evening and hearing some beautiful music.