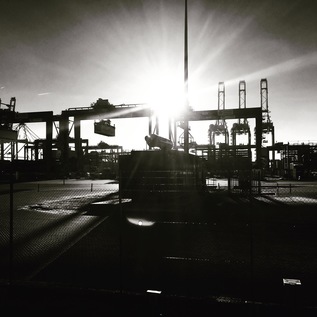 There was just a little hint of the old days - rising early and heading out in the dark to get to the beginning of a railtour used to be a fairly commonplace happening. But today it felt like something of a rarity - and I surprised myself by being pretty excited about the trip despite the early hour. After a quick walk from Hoxton to Liverpool Street station I boarded a No. 11 bus which soon set out across the dark, quiet City of London. As we snaked between the Bank of England and St. Paul's Cathedral, only the very earliest denizens of the streets were out and about. These days between Christmas and New Year, while technically working days, were clearly not going to see a lot of business transacted and the financial district had more cleaners and dustmen than money-launderers in evidence today. The bus swung south from the Strand onto Whitehall, passing Downing Street and heading for Parliament. I was almost sorry when the impromptu tour of the awakening city ended amidst the building site fronting Victoria Station. I was less sorry to have the chance to get coffee though - and despite a bizarrely misunderstood part of the transaction when I incidentally asked if their was a Post Box nearby, I was happy to be served a large steaming cup of coffee and to sit watching the vast station beginning to bustle with incoming commuters. Among them though, a different crowd was evident: eagerly flitting along the gateline, heads arcing over the crowds for unit numbers, backpacks bursting with nutritionally questionable snacks for the day ahead. The Neds were arriving! Forced to concede that I could pass as normal no longer, I joined the procession to Platform 2 where our train waited. These, after all, were my people.

We were soon underway, emerging into a day which had dawned surprisingly bright but still frosty. The route took us around the familiar loop of the North London Line to Stratford where colleagues joined for a sociable day on the rails. From there we headed out into Essex, using the connection to the London Tilbury and Southend railway at Forest Gate to cross into very familiar territory to me. As we scudded over the flat marshes around Rainham and out into the borderlands of Purfleet I spotted locations from my perambulations alongside the tracks - small, insignificant details to the wholly railway-focused bunch on board, but immensely satisfying to me to see how my wanderings had joined up this territory. From the train I glanced down at the broad green walkway beside the Mayes Brook from my most recent ramble, and wondered if the old gent and his dog were out this fine, frosty morning watching our unusual train speeding east? Peeling away from the mainline west of Stanford-le-Hope our first call was at London Gateway - the vast, and still growing, new container port at Thames Haven. My last visit here was to a largely derelict fuel refinery, sitting close to the estuary waters. While some of this landscape remains extant, the edge of the river is now a vast plain of concrete stacked with containers and presided over by computer-controlled cranes. Our train drew along the arrival line, as far as we could practically travel - while beside us the cranes continued their work. Few other humans could be seen aside from the crew of our train walking back to reverse out of the complex. It was a strange mixture of impressive and oddly creepy here. 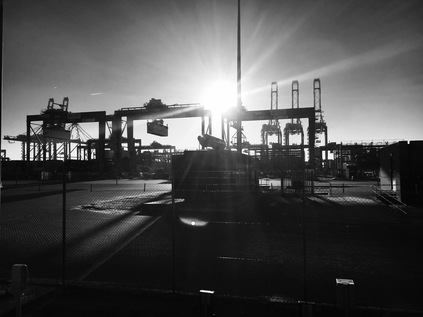 Reversing, we headed back to Grays where again I could see locations from my still-to-be-completed A13 walk. Another reversal took us back towards Tilbury Town, then onto the curve towards the former Riverside station. It seemed odd that this somewhat anachronistic location closed to passengers as recently as 1992 - now serving as the terminal for cruise ships, but still providing the boarding point for the ancient Gravesend ferry. This was where the former British Empire washed against the island's shores - bringing subjects looking for a new life to London and beyond. A point of arrival, but of departure too with the shade of Joseph Conrad and Dracula haunting these reaches of the river. Now it was a forlorn spot - the building separated from the tracks, and the rails serving only a small container depot. The Thames lay out of sight, beyond the clock tower bathed in strong winter sunshine - but it could be sensed and smelled too. A further reversal took us back to Tilbury Town, passing alongside it's beleaguered and tired High Street, and then retracing our steps through South Essex. I realised as we passed through the flat marshland, running parallel with the A13 on its low viaduct, that this area had become a place I felt strangely attached to over the past years. I felt oddly comfortable out here in a place which, on my earliest passings by train, had felt strange and bleak.

Retracing our loop around London, we passed under the line we'd used to depart from Victoria and into the complex network of lines serving North Kent. A recent inspection of the allegedly temporary bridge which had been swiftly installed by the British Army following the disastrous Lewisham Rail Crash in 1957 had left it impassable by locomotive hauled trains, and while it looked like urgent work over Christmas may have remedied this it was too late for this trip which had been replanned to work out to Swanley and effect a complex reversal between two closely-spaced signals. This was managed professionally and we were soon heading east again to Hoo Junction via the rather uncommon Lee Spur. The afternoon shadows were growing long, and the desolate Hoo peninsula was bathed in a golden light as we took the now freight-only line towards the Isle of Grain. The landscape was flat and marshy, riven with creeks and inlets. The tiny settlements on the island were out of sight entirely, only the cranes of the now quiet Thamesport on the horizon. We halted for a road crossing before passing the site of the former branch to Allhallows and creeping forward towards Grain Old Station where we halted for the Fire Brigade to top up our water tanks as the sun finally began to set. Looking south, the tall bridge connecting the Isle of Sheppey with the mainland could be seen catching the last golden flecks of daylight as we prepared to reverse and head back to London. 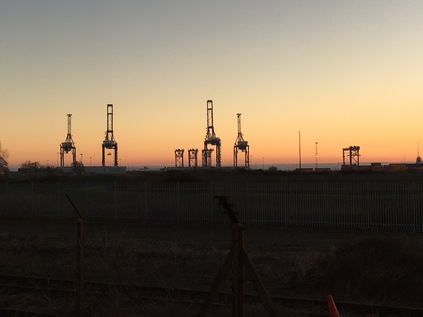 It's been good to get back out on the rails this year - but this trip was rather special with it's traversal of territory so close to my area of interest and so connected to my reading, writing and thinking in recent times. With good company, a well-planned itinerary and trip which actually pulled off all it set out to cover, it turned out to be fantastic day. I even managed to avoid waxing too lyrically about the estuary and the territory we covered I think, but perhaps my tour colleagues should be the judges of that!