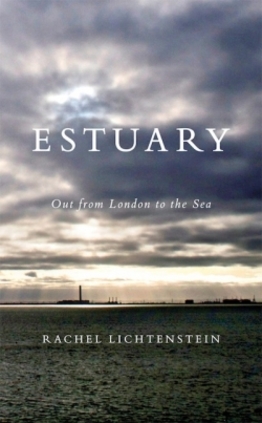 Over the past few years, as my explorations of the Thames have taken me further and further eastwards, I've begun to appreciate the estuary in a different way. It's fair to say that, until recently, the wide expanses of flat empty land almost terrified me. The broad sweep of silver sky broken only by marching ranks of pylons seemed endlessly and bleakly awesome. But it has also always drawn me - the edges of London blurring into the post-industrial wastelands of Essex and Kent are curiously intriguing to me. Haunted by Joseph Conrad and Bram Stoker, and never far from the weird rural gothic of rural eastern England, these white spaces on the map of the British Isles dared me to fill them in with detail. Rachel Lichtenstein's account of her own curious relationship overlaps with mine, but her gaze is firmly eastwards. Having grown up in Southend-on-Sea where the broad mouth of the river opens into the North Sea, her fascination is strongest when considering the remote forts which stride ominously across Shivering Sands, or the treacherous muddy reaches which can strand a cockleboat for hours during slack tides. Those familiar with Lichtenstein's style will be comforted - she writes primarily about people in the context of place, and the social history of the river and shore is never far from the forefront of her prose. She finds the families who trace back their generations in Thames Barge pilots, the women who have lost husbands to the unforgiving tides, and the eccentrics who choose to live out on remote broken outposts in the river - whether for art or solitude.

A theme worming through the book is the impact of the vast Thames Gateway port near TIlbury. This is variously described to her as an imposition on the delicate ecosystem of the river and a necessary evil to keep the seamen and dockers at work, even in now greatly reduced numbers. The impact on the lives of fishermen and their families, wreck-hunters and navigators of the complex estuarial sand bars is carefully catalogued. The sense is that no-one really knows how it will change the topology of the river despite mathematical modelling and careful studies, and this is echoed in the uncertain future faced by the people who live beside it. Lichtenstein is careful to tread the documentarian's path here - she hears and retells the stories, but doesn't wholly pass judgement. The estuary has changed immeasurably over the millennia - and her book is just a sliver in time, describing the latest shifts and changes.

Early in the book, Lichtenstein notes that little has been written about the Estuary as an entity - perhaps because London draws the heat? She interrogates the few sources available carefully, weighing their sometimes quaint historical evidence against what she hears from those who currently live and work here. While it appears true that few factual accounts focus on the estuary, she engages with those who have woven it into their art - not least with Iain Sinclair who trails the river east in his meta-fictions Downriver and Dining on Stones. He joins her at Tilbury Riverside, the former port and railway station where immigrants from the Commonwealth and beyond would arrive in the UK and commence their journey west to London. Her work with Sinclair here - and in earlier shared projects - has been neatly complementary. His topographical and historiographical work meshing with Lichtenstein's social history - bringing his sometimes breathtaking and overwhelming occultism down to a human scale. Together here, they play off each other's interests - Sinclair considering the tide of humanity arriving on these shores, while Lichtenstein looks for eerie geographical features - the stranded masts of the SS Richard Montgomery are unpredictable, decaying fuses signifying the knife-edge on which the estuary sits: politically, culturally and environmentally.

For me, and for other topographical obsessives perhaps, the book feels incomplete - the sinister reaches of the Thames between Purfleet and Greenwich largely unexplored for example. But for Lichtenstein the work is complete - bookended by two journeys: one a dangerous excursion which makes its mental and physical marks on her, the second a redemptive but still incomplete unravelling of the first some years later. In that sense Lichtenstein's broad descriptive sweep and sometimes unfocused prose style are perfect - this is a reflection on a season of life where the estuary haunted her. It is a reverie and an exorcism as much as a social history. A book focused on this very territory was always likely to draw me in - and while covering such an ambitious sweep in a personal account like this didn't feel entirely satisfying, it's certainly one of the finest books written about this weird and remarkable part of Britain. Given how the blank Essex skies often feel like an unpainted canvas, I suspect that anyone who has walked the shoreline will only ever be satisfied with their own version of the estuary. For now, this is a fine proxy.