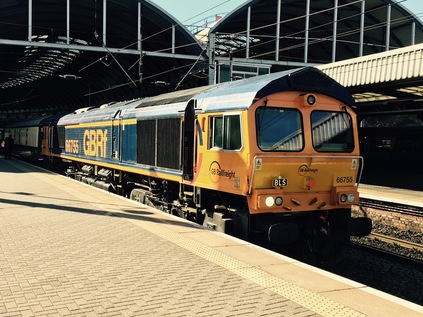 A Tale of Two Ports

This year has been full of surprising twists and turns, not all of them for the better. But one perhaps unexpectedly good thing among an oddly bittersweet period is my cautious return to the railways after an economically enforced absence of almost four years. Way back in February I graced a fairly local railtour with my presence, and I had plans to do the unthinkable and join a DMU tour of my own backyard in May - which was sadly eventually cancelled. With nothing else planned, the year could have ended with just one tour under my belt - still a return, and something to build on. But a welcome alignment of the stars saw our planned holiday colliding with this Bank Holiday outing to rare track in the north east. I made enquires, jiggled dates and booked ahead...

And so, I found myself on a sunny platform at York at a very sociable 10am, listening to the gripes and groans of the local enthusiasts with a big grin on my face. It had been a good long while since I'd done any rail travel in these parts, and while they clucked over the details of what we'd cover - and naturally what they'd already resigned themselves to not covering - I was just pleased to see some old haunts again. As 66755 rolled quietly into the station and I took my seats near to some old friends and new faces, I relaxed into the comfortable Mk 2 seat. Even the air-conditioning was playing ball for a welcome change! As we sped along the East Coast Mainline, heading for our first reversal in the yard at Ferryhill I chatted happily and caught up on railway gossip and future tour plans. It was good to be back on board.

Our first reversal was promising, with a traversal well into the depths of the yard in order to take the Stillington line. My last trip out here had been an excursion to Seal Sands - a site where much of the railway is just a memory now. This time we curved towards the Durham Coast, with its unique mix of post-industrial decline and beautiful views over the North Sea, as far as Ryhope Grange where we slowed and branched carefully onto the line to the Port of Sunderland. Going was slow as we passed the scrap loading facility and headed over the private lines within the port complex. The plan had been to proceed along the dock as far as possible, but the state of the track and the nature of the curve soon put paid to this plan and we came to rest just onto the curve leading to the dockside. We were running a little behind time here, but avoiding the need to reverse into a siding meant we could exit the port a little quicker than planned - and besides those bowled for their photograph of the industrial shunters by a passing female vicar, everyone seemed happy with the progress.

Reversing again at Ryhope Grange, we were soon heading north over the River Wear via a neat zig-zag to achieve wrong-line running through Sunderland, and turning towards Newcastle on tracks shared with the Tyne & Wear Metro. A little after passing Pelaw we took the eastern leg of the triangle at Boldon which led to the short branch to Tyne Dock. Again we pressed on beyond the Network Rail limits, coming to rest alongside the coal terminal, and adjacent to the site where an additional biomass hopper was being constructed. A quick pause for photographs of the crew to mark the charitable donation raised, and we were underway once again, taking the western curve at Boldon to return to the mainline and head into Newcastle from the south. Our break here was to be curtailed to allow us a chance to make up time, but communication between Network Rail and the VTEC station staff had apparently broken down - and as soon as we disembarked the train we were summoned back on board for a 16:18 departure as planned! In the event, the train left at the newly negotiated time of 16:35 as announced on board, and as planned we headed east and over the High Level Bridge over the Tyne. Once over the Wear again at Sunderland - via the opposite wrong-line manoeuvre - we settled in for a leisurely and sunny jaunt back to Ferryhill along the Durham Coast. With almost all of our objectives achieved, including a fistful of loops, crossovers and wrong-way traverses of lines, everyone on board seemed pleased with the day - aside from a couple of shed bashers who wanted different Class 66s of course!

Our final triumph came at Ferryhill where, during our reversal a mysterious 'issue with a windscreen wiper' required the driver to take the train to a safe place to inspect. Said safe place was a line deep into the complex, adjacent to the signal box and not far from the stub of the former line to Coxhoe. With this final extra under our belt we reversed again and 66735 led us back home to York arriving almost exactly on time. There was even a chance for a celebratory drink at the York Tap before we parted ways with friends until the next time. It was certainly good to be back!