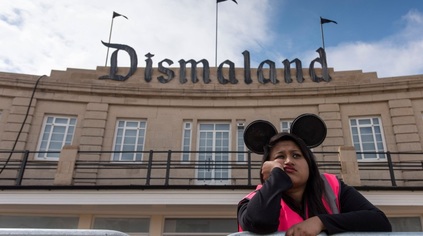 I first visited the Tropicana on a school trip - probably sometime in the late 1980s. I wasn't a swimmer, so joining a small number of sick, limping or otherwise unpopular kids, I skulked around the margins of the site. There was a model railway, a cafÃ©, and plenty of space to sit and ponder how much more fun the other kids were having in the pool. Even then there was a sense of gloom about the place: beyond the huge fibreglass pineapple that dominated the site - and which gave it perhaps it's only truly 'tropical' credentials - the plaster was already peeling, the colourful murals of palm trees and blue skies flaking under the pressure of a spending crunch. After an interminable day that was perhaps remarkable only because it didn't involve being in school, I was glad to leave the place. It is miraculous that it struggled on as long as it did after this, finally closing its doors in 2000, outdated and outpaced by tastes and time. Left behind - a portent of things to come for Weston-super-Mare perhaps?

However, as the last fifteen years have proved, the Tropicana is privileged space. It occupies a slot in countless thousands of memories. It has figured in the summer holidays of locals and visitors alike - and thus it is recalled in that special way that childhood summers always are. It never rains, the colours are brighter than reality, the days longer, food tastier. These memories have been trampled by the steel toecaps of reality for long enough for the site to be almost mythical, and for a town prone to almost terminal apathy, the public can be easily roused by even a perceived threat to the hallowed quadrant on the sea front. For years though, it has only truly existed on the pages of Council Executive reports and architects drawings. The site has variously sprouted huge hotels, cinemas, towers of housing. Always with those shadowy sketch-people milling around them which proxy for reality in these artist's impressions. Developers have come and gone. Opportunistic local bruisers have tried to make political capital from the ruin, while simultaneously proposing to raid the public coffers. Eventually we reached the point of no return - the Tropicana was to be demolished. It felt like a necessary exorcism. But still it is attached, decaying and prone to infection. Weston's ever-grumbling appendix.

The reaction to Dismaland has been both entirely surprising and utterly predictable. The surprise has largely centred on the miracle that this most scrutinised and picked-over of sites could be transformed so completely yet so secretly before us in plain sight of the town. Indeed, that the much-maligned Council could have allowed - sponsored even - something of this nature has bewildered people. Their normal knee-jerk reactions stopped in mid-ascent towards the collective groin of the elected members. The - entirely accurate - story that only four people in the organisation knew the whole truth is equally astounding in the leaky rumour-mill of the Town Hall. But there are more predictable voices at large - many rehearsing the bizarre belief that the Council is stupid enough not to see the double-edged swordplay it indulges in by inviting an event called "Dismaland" onto its prized promenade - indeed onto this most sensitive of local sites. Rolling eyes and folding arms, they tell me that the event will pass into history with the momentum not seized. That it's all a bit rubbish because they don't get 'art' anyway - and probably wouldn't get tickets if they tried. After all, Weston is a bit crap, right? For a few days, this low-pitched drone has surrounded the place, cloaking it in the very miasma of gloom that the curator is trying to foster. If anyone has been gamed, it's these very doubters who are now playing a key part in the set-piece on the seafront.

I've written and talked a lot about the seaside resort problem - and on one of its many levels, Dismaland taps right into this. It reminds me of a family I saw tumbling out of an Eastbourne cafÃ© one Saturday morning a few years ago. As they picked the stringy bacon fronds from their teeth they summed up the issue in a single question: "What the fuck are we going to do until dinnertime?". The disappointing attraction, the underwhelming spectacle and the hours of time killed between cheap food and beer binges are summed up in the premise behind Banksy's installation. The venue is also perfect. Seaside towns are different from 'towns by the sea': they've chosen not to change and have resolutely stayed on rails laid in the late 19th century. The family seaside holiday of guest houses, fish and chips and beach-hogging is the preserve of a now itself nearly mythical working class. Fortunes dwindle, buildings peel, capital retreats - and now these towns regularly appear at the top of child poverty ratings and unemployment figures, suffer disproportionately from addiction and crime and oddly rank highly in their negative responses to immigration despite being some of the most resolutely white parts of the nation. That fear of the incomer, that disparaging view of those who arrive in town - the tendency to bite the hand of the 'grockles' that feed them is burned deep into Weston and it's natives. They are about to suffer the biggest influx of incomers for many, many years - it's going to be entertaining to watch.

The other equally gloomy if somewhat quieter voices are those from neighbouring towns, decrying the desperation which leads a place to accept Dismaland as its defining moment. There is a touch of green around their gills for sure - it's a ludicrously good coup, and a glance at the economic benefits from Banksy's Bristol exhibition a few years back rightly makes them seethe with jealous rage. Their prime concern is the town's brand - how it can recover from this shock to its system without suffering the sting in the tail of the term "dismal"? But they miss a point here - the town simply doesn't have a brand. It's one of those reforgotten resorts which has been at this crossroads for years - Stag venue? Retail centre? Dormitory town? The options are unedifying at best - but this offers an alternative. As the world was griping about the ticketing website failing and the early-invitees smugly sharing their pictures of the site yesterday, the Chief Executive of North Somerset Council was changing tack - pop-up shops in town would be encouraged, creative events and industries promoted. This is tremendously significant - the received wisdom before was that if we wanted to attract big High Street names, it was always better to have an empty shop in town than some scruffy little independent cluttering up the place. The truth is perhaps the opposite: another Poundland or charity shop is a much bigger disincentive, while the major chains watch successful independents like vultures waiting to swoop. Let them do the hard work before we arrive. There is finally a bit of coherence to the vision for the town. It remains to be seen if it plays out as they hope - but I think the textbook regeneration doom-mongers are a little more spooked than they admit.

I've yet to visit Dismaland - but I'm excited to have this opportunity on my doorstep. Quite apart from the playful, irreverent fun of the pieces Banksy has assembled, the sense of an event and the sheer oddness of revisiting a childhood haunt transformed completely, there is a more substantial edge to this. The exhibits play into the concerns we should all have about our public spaces - privatisation of access, spiralling security measures, domination by faceless brands and franchises. I'm also excited by the debate that seems to be emerging: the ideas about what local government is for, what public spaces should host, and what kind of vision we should develop for that most difficult of places - a fading seaside resort on a muddy estuarial reach. I hope too that in time, the doubters are at least quieted by the success of this enterprise - but I know they won't be. After all their lemon-sucking cynicism and their desperate clinging to irony is as much part of the show as the crumbling Disney castle silhouette.