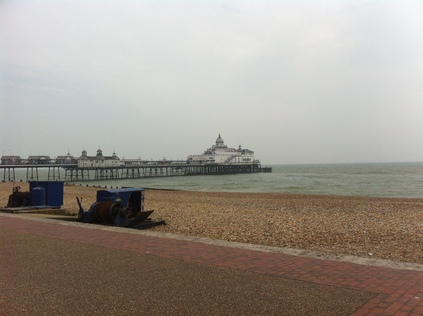 In The Year Of Jubilee

Everyone told me I was insane to travel this weekend, and particularly so to consider going anywhere near London. They were, on reflection probably right for a number of reasons. This trip was conceived in a desperate attempt to find something - anything - to occupy me for part of this extra-long Bank Holiday weekend. The plan I'd opted for was one suggested by a friend offering her opinion on Eastbourne. It wasn't positive - but where there is a seaside resort to visit, I'm usually up for it. Perhaps it's living in a series of blighted, slowly dying resort areas myself? So this morning didn't start well - a mild but persistent headache, the threat of rain and an argument with a cash machine dogged my journey to London. The early train was perhaps a little busier with families heading up for the weekend, but not hugely so and I was left to ponder my irritation in peace. Having resolved my financial position with some relief that the machine at Paddington willingly gave me money, my paranoia switched to considering that perhaps the ATM at home had some sort of evil skimming device inside it? I headed to Victoria via a very quiet Circle Line train, and with some time to spare decided to breakfast here. It was much busier, with all manner of oddly-hatted people heading for Epsom Downs and Tattenham Corner trains to reach the Derby, where the Queen would be making her first appearance of the Jubilee weekend. There were a lot of people here who didn't travel by train often it was clear - as they tried to insert bus tickets into the gates, and in one notably silly case where a woman bitterly complained to a Network Rail official about "YOUR pigeons attacking us and stealing our food". It all seemed so distant from last weekend - this was a reality of London of course, but not the one I knew. I found my coach in the 12 carriage service to Eastbourne which combined with a Littlehampton service as far as Haywards Heath. Even the locals seemed confused by where they should be despite clear announcements. Otherwise it was an easy enough journey, delayed a little at East Croydon by signalling issues - and passing a notably long queue of London-bound trains as we headed south.

And so I arrived at Eastbourne's rather grand terminus. I'd been this far before, on a train which called and reversed for Brighton, but had never wandered onto the interesting concourse - an odd lozenge-shaped building nestled into a road junction. It was clean, spacious and had a pleasant feel to it. I was tempted to linger for coffee but remembered the challenge, and pressed on into the town. I was immediately struck by the 'onion skin' effect here - Eastbourne has been built in layers around the station it seems. Beyond is the Old Town, mostly residential and unvisited now - so I headed along Terminus Road which cuts through the various layers of the town. The retail area is frankly depressing - it's only redeeming feature being a range of small, local traders still clinging on by their nicotine-yellowed fingertips among the national traders. The pedestrianised areas are cramped, illogical and seem to cause people to cannon into each other. Several times I stepped aside to let a pram or a wheelchair through, and was shoved hard from behind and sworn at. It seems here showing any sort of respect is to show weakness in the struggle. The older people were worst - like the other south coast excursions I've made, the volume of their voices struck me. They crowed and shouted at each other, expletives dotted their regular speech. The younger generation just seemed depressed and downtrodden, fake tan and ludicrously comic breast enhancements featured, males gripped females like they owned them. Meanwhile a foul smelling Wimpy Bar poured greasily sated young people onto the street. This was a grim, demoralising place.

Eastbourne in the mist

The next layer of Eastbourne was more sinister. A curved ring of huge victorian villas and town houses surrounds the town, with Terminus Road cutting across it. It was quiet here, and the architecture was stunningly original seaside chic. I explored a little but soon realised that despite being a few yards from town I was in fact alone. The reason soon became clear. These huge sprawling properties, once guest houses or private dwellings had been divided into hundreds of flats, some of them were dry houses or supported accommodation, all of them looked decrepit and run down. Especially those which were still clinging on as guest houses despite the change in tone of the neighbourhood. This area felt dangerous, it's silence oppressive. I headed back to the crossing and turned towards the seafront at last. Here I encountered an odd avenue of restaurants and tat shops which led the short way to the sea. It was a little after 11am, and the restaurants - competing in the size or price of their breakfasts - disgorged tourist families, still picking rind from their teeth and wondering as in one half-captured conversation "what the fuck we're going to do until lunchtime?". Their weekend a procession of meals with empty, bored oblivion between them. I called into a shop and grabbed some lunch, the assistant smiled pleasantly and wished me a nice day - she seemed world-weary and turning to see the queue of men behind me with one can of Special Brew each, I sort of understood. The jewel in Eastbourne's crown should of course be it's seafront - and in many ways it is. Dominated by a sweep of white stuccoed houses and hotels, it's tidy and clean, and seems well used. The shingle beach is not swept by huge tides, so there is no need for sea defences, and instead there is a wide, tarmaced cycling and walking path alongside the beach. I found a spot to eat and rather liked the view - a slightly forlorn pier in the distance, decaying groynes and a churn of atmospheric sea mist. I realised here how important the sea was to me, whether I was home or in the far reaches of Fife or Strathclyde, it always called me. I noted a woman passing by, eyeing me with distrust. She did so once or twice and clearly didn't like the look of me. Clutching her sandwich, I expected her to move off and sit elsewhere, but clearly I was in her spot as she sat down feet away, and with every slowly chewed, deliberate mouthful she glared at me. This was now a battle of wills and I was determined to outstay her. Eventually, she finished the sandwich and left. I think I might, inadvertently, have ruined her day? I made my way back to the station as fast as I could. Eastbourne was just as it had been described to me, and I didn't like it at all.

My ride back via Brighton was colourful, with all manner of weird and wonderful folk arriving at the terminus for the Fat Boy Slim concert that evening. Having found myself there a couple of times lately, it was interesting to see the station respond to events in town calmly and efficiently. My own plans didn't quite work out as some sort of diagramming change saw the pair of Wessex Electrics I'd hoped to catch on the 14:49 disappear north on the 14:19, leaving me with a meagre six coach Electrostar back to Victoria. I cowered in First Class, listening to a coach full of gleeful middle-class monarchists enjoying their picnic and mid-priced Tesco wine. London had brightened up when I arrived, and I waited in the sun for a No.36 bus back to Paddington happily enough. Hyde Park was a mass of humanity, a huge screen erected and a concert of some sort going on. I was moved to think of George Gissing's novel set in the Jubilee year of 1897 - he railed against commercialism and advertising, and foretold much of what I could see from the window of the bus. I'm pretty sure he also spent some time in Eastbourne. I wonder what he'd make of it today?